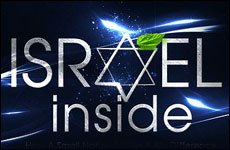 A new documentary on how Israel's spirit and resilience brought them to the forefront of world innovation.

These days it can be pretty hard to find something positive about Israel in the media. In fact, the outlook is pretty bleak. There seems to be no limit to the amount of bashing Israel receives. On top of that, Jewish students on campuses across the country are also having to face often overt hostility to anything related to Israel, be it from their professor, a student group or campus demonstrations.

Realizing how difficult it was for anyone to present Israel and its people in a positive light was exactly the inspiration for the filmmakers behind a new documentary called Israel Inside: How a Small Nation Makes a Big Difference.

In 55 minutes, this insightful and uplifting documentary sidesteps the usual conversation of politics, conflict and violence, and tells the story of the Israeli people – a resilient and dynamic nation – whose spirit has brought the tiny country of Israel to the forefront of world innovation and progress.

The film’s narrator, Dr. Tal Ben Shahar, also weaves his own life into the documentary and takes you on a journey to understand what being an Israeli is all about.

Tal, who is a highly successful academic, public speaker and author, gave up a prominent position as Harvard University’s most popular lecturer to return to his homeland, Israel. Tal explores core Israeli character strengths – called “actualizers” – that enable the country to succeed against incredible odds. Through Tal’s eyes we discover that deep-seated values such as education, family and responsibility to the world, directly contribute to Israel’s accomplishments in the economic, technological and humanitarian spheres.

“None of these actualizers are in and of themselves unique to Israel, but in combination, they are bringing about an almost unparalleled progress, success and contribution to the world,” Tal says in the film. “These actualizers have not only made Israel what it is, they also have the potential to help us all enjoy happier, more successful, more productive lives. Through them we can contribute. We can make the world a better place.”

Israel Inside looks at some of the most impactful innovations and initiatives that are having a far-reaching and positive effect on the rest of the world. For example, we meet the CEO of Netafim, Naty Barak, who heads a company that through its breakthrough development of drip irrigation has made an untold difference for countries like Australia and India who often experience extreme drought.

We also meet Amit Goffer, an incredibly humble and inspiring man who invented the ReWalk, the first commercially available upright walking technology, which enables wheelchair-users with lower-limb disabilities to stand, walk, and even climb stairs.

In the humanitarian sphere, Israel’s contributions are no less impressive.

Shachar Zahavi, the founder and Chairperson of IsraAID – The Israel Forum for International Humanitarian Aid – talks about how Israeli medical aid was practically the first international assistance on the ground following the devastating earthquake in Haiti in 2010. Israelis were also among the first to arrive after the earthquake and subsequent catastrophic tsunami that hit Japan earlier this year.

This is a film that needs to be seen in every school, every college campus, and every synagogue and community center.

“Despite daily challenges ranging from limited resources to security needs, Israeli creativity and inventiveness advance Israeli society, while simultaneously helping make the world a better place,” said Raphael Shore, Producer of Israel Inside. “Israel has made significant advancements in the fields of science, environment, medicine and technology – and more significantly – it has shared these developments with the rest of the world.”

Israel Inside also takes a lighter look at life in the Jewish state. Tal shares with us how Israelis have no qualms in telling you how to raise your children and how they do not hesitate to give you advice, whether you like it or not! One of the “actualizers” is chutzpah – a word familiar to most of us – but it is great fun watching the various interviewees in the film trying to explain exactly what chutzpah means!

Israel Inside also features interviews with a veritable who’s who in the Jewish world. Everyone from Israeli President Shimon Peres to Co-founder of Birthright, philanthropist Michael Steinhardt; esteemed academic and author Alan Dershowitz and leading historian Sir Martin Gilbert all share their views on this remarkable country.

Given the uphill battle Israel is facing these days, Israel Inside could not have come at a better time. This is a film that needs to be seen in every school, every college campus, and every synagogue and community center. Israel Inside has the power to instill a sense of Jewish pride that has been so sorely lacking in communities around the world.

Even more importantly though, this film needs to be seen by a much wider audience - by people who only know Israel from the headlines, the biased reporting and the angry protests on campus. Watching this film is definitely the next best thing to getting on a plane and experiencing this amazing country first hand. Israel Inside is a very important film with a very powerful message.

Israel Inside will premiere on November 29, 2011 in South Florida on WPBT2 at 8:00 PM. You can also visit www.IsraelInsideTheMovie.com for a sneak peek and more information.