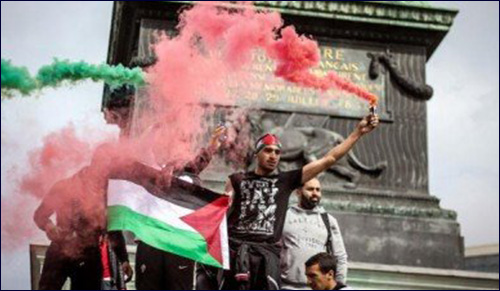 Everyone here understands that we are fighting for our lives.

Everyone I know feels like they are walking through water.

We are all so very, very sad.

This is what I know right now, today:

The ugliness, the venom and sheer, violent hatred you are seeing in Paris, London, Berlin, LA, Boston, Denver…. this is just the beginning.

Today they’re throwing bricks at synagogues and saying “Kill the Jews.” Tomorrow it will be someone else.

We Jews are the canaries in the coal mine for all of humanity. Today they are throwing bricks at synagogues and smashing chairs and saying “Kill the Jews.”

Tomorrow it will be someone else.

Do the French really think these people will protect and safeguard the treasures of the Louvre?

Do Londoners really think these people will cherish the symbols of the British Empire?

Does anyone really think this is only about Israel and the disputed territories?

Today it is Israel, tomorrow it will be you.

Maybe that is why everyone gets so disproportionately annoyed about this conflict. Because everyone knows after us it gets real personal…

Seeing these violent protests, hearing the sickening screams for death, we Israelis understand better than ever we must fight for every square inch and with all we have.

It matters not how much better our military is, how much more precise our targets can be.

It only matters that when the smoke clears Hamas is disarmed, destroyed, disabled and defeated. Forever.

Hamas. NOT the people of Gaza. I feel so very sorry for them. Sorry they were misguided and elected these lunatics. Sorry that in their desperation they allowed Hamas to fill the empty bedrooms next to their children’s room with rockets. Sorry that their leaders have mansions and swimming pools and are sitting in air conditioning in another city while they are sweating and wondering where the roof over their houses went. (If not their house itself.) Sorry that they have been brought up with no inkling of who Israelis are nor what compromise is.

Defeating Hamas will be a big problem for the power brokers because shame and honor are all that matter in this part of the world.

Honor in the Middle East does not come from whether your children are literate, how successful you are, how much money you make, how civilized your community is, nor how many paved roads you have, and whether or not you have garbage collection and recycling.

Here in this part of the world, for Hamas, honor comes from getting revenge.

For them revenge is everything.

For them revenge is the only thing.

Remember we left Gaza. There was no blockade. They were free to build a model democracy- the first successful shining, taste of the new, proud Palestine. But they didn’t want that kind of success…

Fool me once, shame on you.

Fool me twice, shame on me.

We will not be fooled again.

We have nowhere else to go. And the rockets won’t stop.

The folks in the south cannot shower, go the bathroom, get more milk or walk a dog without wondering if they are taking their lives in their own hands.

There is another Gaza underneath Gaza.

Hamas could have built hundreds of schools, paved thousands of roads, build hundreds of kindergartens with the cement and iron they have used to build these underground bunkers and tunnels (and you wondered why Israel put a blockade on bringing building supplies into the Gaza strip?).

These tunnels to hell are filled with ammunition.

And no women or children, not a single elderly person is brought to safety there.

They want them on the street, on the roof, standing right behind, nice and close to the terrorist firing the rocket.

Hamas asked for a cease-fire.

And they broke it.

They break every single one.

Israel is setting up a massive field hospital to treat our enemies. There will be a working maternity ward, an operating theater…a working hospital. For… our enemies.

We have lost 53. And I am afraid we are going to lose more boys.

But everyone here understands that we are fighting for our lives.

They cannot compromise and they don’t want peace or to share or to negotiate. They want revenge even if it means killing their own people.

So we have to go in there and do things none of us want to do, but we have to.

So this is why we are all so sad.

But we also desperately want to live. We love life and we are not about to let anyone, let alone a bunch of deranged thugs, take it away from us.

Remember, if they win, you are next.

If we win those symbols of civilization that everyone takes so for granted will remain standing and everyone will criticize and complain about disproportionate responses and war crimes and all kinds of other irrelevant nonsense, but secretly I think everyone will be heaving a sigh of relief.

It Takes a Virus

In Praise of Praise
Where Do the Laws of Nature Come From?
Saadiah Gaon, Rashi and Maimonides: How Three Rabbis Revolutionized Judaism
King Sennacherib and the Siege of Lachish
Comments