Israel and Racism in America 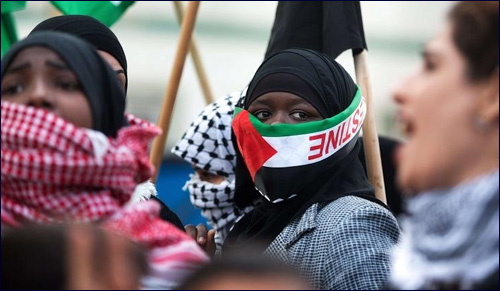 Students for Justice in Palestine exploit the deaths of innocent Americans to further their own anti-Semitic political agenda.

In response to the tragic deaths of Philando Castile and Alton Sterling at the hands of police officers in Minnesota and Louisiana, the New York University chapter of Students for Justice in Palestine (SJP) posted the following on its Facebook page:

"In the past 48 hours another two black men have been lynched by the police.... We must remember that many US police departments train with #IsraeliDefenceForces. The same forces behind the genocide of black people in America are behind the genocide of Palestinians. What this means is that Palestinians must stand with our black comrades. We must struggle for their liberation. It is as important as our own. #AltonSterling is as important as #AliDawabsheh. Palestinian liberation and black liberation go together. We must recognize this and commit to building for it."

Even in moments of national mourning such as these, SJP bigots cannot help but exploit the deaths of innocent Americans to further their own anti-Semitic political agenda, namely to delegitimize and demonize the nation state of the Jewish people.

By implicating Israel in these killings, SJP is engaging in the old trope of blaming Jews for systemic and far-reaching societal problems. This practice was anti-Semitic when some Christian communities used it to blame Jews for plagues, poisonings, and murders; it was anti-Semitic when the Nazis used it to blame Jews for the failing German economy; and it is still anti-Semitic today. There is no more evidence that any of the police who killed Mr. Castile and Mr. Sterling were in fact trained in Israel than there was that Jews were responsible for any of the other crimes that formed the basis for traditional blood libels.

The essence of anti-Semitism is the bigoted claim that if there is a problem, then Jews – and now Zionists – must be its cause.

The oppression of black Americans long predates the founding of the state of Israel; contrary to the claims of SJP and like-minded groups, Zionism did not beget racism, nor is Zionism a reflection of racism. It is the national liberation movement of the Jewish people. But the twisted logic on the part of SJP should come as no surprise, given that the same organization blamed Zionism for rising tuition costs in the City University of New York college system. The essence of anti-Semitism is the bigoted claim that if there is a problem, then Jews – and now Zionists – must be its cause.

Addressing the structural causes of racism in the United States will take more than scapegoating Israel – it will require the type of far-reaching legislative action of which our current Congress seems incapable. By morphing the discussion about criminal justice reform and systemic racism in the United States into a polemic against Israel, SJP makes progress even more difficult.

That said, the reaction by SJP is reflective of a broader trend in hard left politics. Increasingly, groups such as Black Lives Matter (BLM), MoveOn, Code Pink, and Occupy Wall Street have embraced intersectionality – a radical academic theory, which holds that all forms of social oppression are inexorably linked.

This radical concept has led to the linking of disparate left-wing causes, no matter how tenuous their connections. Some intersectional feminist activists, for example, insist that feminists must oppose drone strikes (and by extension, Hillary Clinton), because they negatively impact women in the developing world. Even more absurdly, Jill Stein – the Green Party candidate for president – has come out in favor of the bigoted Boycott Divestment Sanctions (BDS) movement against Israel, partly on the grounds that support for Israel furthers the interests of the military-industrial complex, and by extension the fossil fuel industry.

Intersectionality seems to be driving hard left activists towards a "No True Scotsman" worldview: increasingly, they insist on a package of unrelated left-wing causes that must be embraced by anyone claiming the label of progressive – including the demonization of Israel as a racist, apartheid state.

Perhaps more worryingly, intersectionality tends towards the conclusion that the existing social, political, and economic system is flawed in so many profound ways, that any attempt at remaking it through democratic means is unacceptable. Activists have become increasingly obsessed with "Shut it Down" protest tactics, and a proud politics of "disrespectability," that prioritizes resistance to a "corrupt," "rigged" socio-economic system over respectful discourse and political compromise.

This helps to explain the sympathetic attitude of Black Lives Matter activists towards groups like Hamas, which embrace terror as a mode of "resistance" (in their view) against Israel. Indeed, Black Lives Matter activists have visited Gaza to express solidarity with Palestinians oppressed by so-called racist Israeli self-defense measures. While Black Lives Matter claims to disavow violence in securing its political objectives, many of its most prominent members are far more eager to criticize the "Israeli genocide of Palestinians" than to criticize Hamas for using rockets to target Israeli civilians. Black Lives Matter and other hard left groups have been notably silent about other oppressed ethnic groups such as Tibetans, Chechens, and Kurds. The only alleged "oppressors" they single out for condemnation are the Jews. This double standard raises legitimate questions about their real motivations.

Moreover, the conflation of police actions in American cities with Israeli military actions in Gaza raises a disturbing question: if the so-called oppression of Palestinians in Gaza and the oppression of people of color in the United States are two sides of the same coin – as the SJP implied in its tweet – are the violent tactics employed by Hamas, and perversely supported by many on the hard left, an appropriate model to emulate in the United States? One hopes that the answer is no, and that the intersectionalist radicals will make that clear to their followers.

This op-ed originally appeared on http://www.gatestoneinstitute.org/

Why Israel is the World’s Best Nation

In the Name of Allah