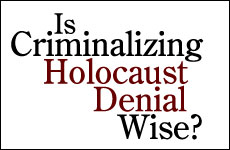 Such statutes create a dangerous precedent to outlaw other discussions as beyond the pale.

Growing up in the United States, I never gave much thought to statutes criminalizing Holocaust denial. Any such statute would almost surely be struck down under the First Amendment of the United States Constitution. Such statutes, however, are common in Europe.

Most Jews probably have an instinctive sympathy for outlawing Holocaust denial and experience satisfaction when some European Holocaust denier is sentenced to jail or fined. And indeed there are at least two powerful arguments in favor of such statutes. The first has to do with the special pain felt by the victims of the Holocaust by the denial of the hell they went through and inhuman cruelty inflicted upon them. Few of them could have imagined in their worst nightmares that within fifty years of their liberation there would be a whole cottage industry devoted to denial of their suffering.

The more compelling argument lies in the role of Holocaust denial in the arsenal of the most virulent of contemporary anti-Semites. Until reading Professor Robert Wistrich's A Lethal Obsession, I never fully appreciated how important Holocaust denial is to present day Hitler wannabes. Wistrich details how Holocaust deniers fan the flames of potentially lethal anti-Semitism with their claims. For them, the "Holocaust myth" is but the latest example of the Jews talent for manipulation – a gigantic conspiracy that has brainwashed almost the entire Western world and has been used to extract huge reparations from the Germans and create sympathy for Jews and the State of Israel.

At the end of the day, however, anti-Holocaust denial statutes are likely to be counter-productive. The very existence of such statutes will always be pointed to by anti-Semites as further proof of the reach of the Jewish tentacles that hold European legislators in their clutches. Worse, they could very well add credibility to the claims of the deniers. The latter will point to the illegalization of Holocaust denial as proof of the power of the their arguments. Precisely because they cannot refuted, the deniers will claim, must their ideas be ruled outside the pale of legitimate discussion.

The most powerful argument against statutes banning Holocaust denial, however, has nothing to do with their direct impact. Such statutes create a dangerous precedent for other efforts to outlaw certain discussion as beyond the pale.

In his classic "On Liberty," John Stuart Mill observes, "All silencing of discussion is an assumption of infallibility." Most of us could come up with a few candidates of propositions that we consider beyond legitimate debate. Some global warming enthusiasts, for instance, refer to opponents as "deniers" to link them to Holocaust deniers in their depravity.

Classical liberals are largely protected from the "assumption of infallibility" by their emphasis on what Isaiah Berlin termed "negative liberty," the absence of barriers or constraints on individuals, particularly on their freedom of thought and expression. But those who conceive liberty positively, in terms of the liberation or self-realization of the individual, or more typically some collectivity, are subject to the totalitarian temptation: That self-realization, particularly of the collective, generally requires the coercive power of the state.

The totalitarian temptation, and its less extreme expressions, is further heightened among those who have grown up in an environment where one political viewpoint is so dominant that it is easy to suspect anyone holding opposing views as being mentally incompetent or morally corrupt. That would describe students at many elite universities in the West. Not surprisingly, the speech and conduct codes at some American universities are perhaps the most glaring examples of limitations on freedom of speech in America. Opposition to homosexual behavior, for instance, as immoral, or even quoting the Biblical prohibition, could run afoul of some such codes.

With respect to no subject is freedom of speech so imperiled as with respect to Islam and its adherents. Under a Council of Europe framework decision that went into effect on November 28, all European Union member states are required to combat "certain forms and expressions of racism and xenophobia by means of criminal law." Inevitably, those laws will be used to prosecute critics of Islam and those who warn of the dangers from Europe's growing Muslim population.

An Austrian court fined a retiree whose Muslim neighbors complained that his yodeling sounded like the muezzin's call to prayer.

Indeed they already have. Elisabeth Sabaditsch-Wolff has been charged with "inciting hatred against a religious group" and "defamation of religion" for a 2009 presentation on the "Islamization of Europe." And an Amsterdam Appeals Court overruled the Dutch Prosecutorial Services decision not to charge Geert Wilders, the head of the Freedom Party, for comparing the Koran to Mein Kampf. An Austrian court even fined a retiree whose Muslim neighbors complained that his yodeling sounded like the muezzin's call to prayer and was thus insulting.

In both the Sabaditsch-Wolff and Wilders cases, the presentations for which they were charged consisted primarily of quotations from the Koran and the hadith literature. Quite likely, those presentations were tendentious and one-sided. Certainly some of Sabaditsch-Wolff's examples of the imposition of sharia (Muslim religious law) – i.e., Muslim parents preventing their daughters from mixed swimming -- will strike most Americans and all religious Jews as legitimate exercises of freedom of religion. But where the gravamen of a criminal complaint for insulting Islam consists of direct quotes from Muslim sources, then legitimate debate about an Islamic threat to Europe is being cut-off.

By attempting to shut down discussion of Islam, under the rubric of combating Islamaphobia, European policymakers are helping to bring about their worst nightmares. Those nightmares involve bloody clashes between Muslims and native Europeans who feel that their culture is under assault from fast-growing, poorly assimilated, immigrant populations. That is indeed possible. But placing Islam or the behavior of Muslims so far beyond the pale of discussion that even truth is no defense only exacerbates the danger.

Nothing injects more bitterness into the political system than the widespread feeling that the political playing field is tilted. If native Europeans see that prosecutions are never brought against local imams for incitement against the infidels, or that Christianity, but not Islam, may be denigrated with impunity, their fury will only grow.

In addition, limits on discussion of issues of public concern because of the uncomfortable implications of certain facts make it less likely that appropriate solutions will be found in time. Airport security in the United States is a good example. The refusal to acknowledge that likely terrorists are drawn from a small and largely discernible slice of the population imposes an immense burden on air travelers and delivers a victory to terrorists.

The rising Muslim population in Europe, especially as that population grows more radicalized, is a threat to European civilization, and pretending otherwise will not make the threat go away. But such pretending by policymakers will prevent the adoption of immigration and social welfare policies that can reverse, in part, those trends.

Legal prohibitions on Holocaust denial serve as an attractive example for government meddling in the free marketplace of ideas. But given the costs of any precedent for allowing European elites to determine what is proper and improper speech, and what topics may be discussed, giving up Holocaust denial statutes is a small sacrifice.

It's a Mistake to Ban Holocaust Denial
Why the Mezuzah is Placed on a Slant
Faith: the Axis Upon Which the Wheel of Science Turns
Love - Not Just About Chemicals Anymore!
Comments
MOST POPULAR IN Current Issues
Our privacy policy