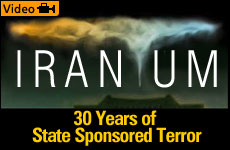 An exclusive clip from the new documentary film.

Iran is the single largest state sponsor of terror in the world. All too many of the world’s major terrorist attacks during the last 30 years can be traced back to Iran. The following clip is one of 8 sections from the new ground breaking documentary film Iranium. This 60 minute film outlines the threat that a nuclear Iran poses not only to the United States and Israel, but to the whole world.

Iran’s nuclear program is not an isolated problem. Rather, it is the most dangerous component of a brutal ideology established by Iran’s leaders during the 1979 revolution.

Since the inception of the Islamic Revolution in 1979, Iran has displayed an absolute hatred for the West, and sponsored acts of terror around the world. This extremist worldview is ingrained in the State’s constitution and apparatuses, and has been supported by the actions of the regime’s leaders.

Now 30 years after the start of the revolution, Iran is on the cusp of crossing the nuclear threshold.  By many estimates, Iran is less than a year away from producing a nuclear weapon — if not sooner. The development of a nuclear program has only added to the already immense danger posed by this regime, and the numerous threat scenarios posed by a nuclear Iran are beyond frightening.

All the while Western powers—and in particular the United States—have dangerously misread the intentions of the Iranian regime.  It is for this reason that diplomatic negotiations with Iran have failed since 1979.

The Iranian people, hijacked by a regime that does not represent the national aspirations of its citizenry, are now trying to stimulate a new revolution to force Iran’s leaders from the seats of dictatorship.

A new documentary film, Iranium, powerfully reports on the complex threats the world now faces from Iran. Demonstrating the hatred and violence exhibited by Iran’s brutal leadership, the film chronicle’s the regimes abusive treatment of its own citizens, and its state-sponsorship of terror for over 30 years.

Using rarely-seen footage of Iranian leaders and interviews with 25 leading politicians, Iranian dissidents, and experts on Middle East policy, terrorism, and nuclear proliferation, Iranium outlines the various scenarios the world may face should Iran cross the nuclear threshold. The film also presents the policy options currently being utilized and considered to deal with the situation in Iran.

Iranium will be premiere on February 8, 2011, at select AMC movie theaters and community centers throughout North America. In addition to the scheduled screenings, the film will be made available for free online streaming on February 8 for the first 50,000 registrants. Individuals may register to watch online at www.iraniumthemovie.com.

A pre-release screening of the film scheduled for January 18 at Canada’s National Library and Archives (LAC) in Ottawa was canceled following threats of protest and requests to cancel the event, some of which came directly from the Iranian Embassy.

The cancellation of the LAC event, which was to be the first major screening of Iranium in Canada, angered Canadians, including Ministers in the Canadian government, who are committed to their country’s stated core value of protecting free speech.

James Moore, the Canadian Heritage Minister, said that the Iranian Embassy “will not dictate to the Government of Canada which films will or will not be shown in Canada,” and demanded that the LAC show Iranium despite threats of violence. In turn, LAC announced that Iranium will be screened on February 6.

Iranium, a film which exposes the Iranian regime’s radical ideology, its funding of terror proxies throughout the world, its abuse and maltreatment of the Iranian people, and its illegal development of nuclear weapons, is the film Iran’s leaders do not want you to see. Stand up for your right to freedom of speech, show your support for the Iranian people in their struggle to bring democracy and freedom to their country, and condemn acts of terrorism throughout the world by watching this film on February 8 and sharing it with others.