Iranian TV and Me 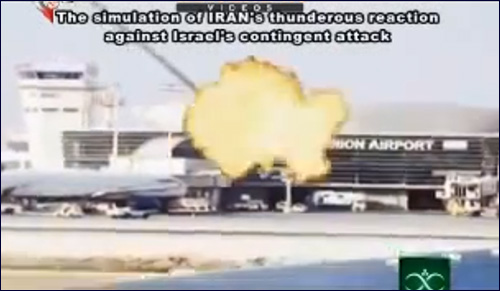 Iran’s graphic portrayal of the destruction of Israel.

The government of Iran has nothing over Hollywood when it comes to simulating war scenes. Hollywood could have produced more realistic and sophisticated footage of the bombing of Israeli cities than what Iran’s state TV station aired last week. The only difference is that Iran’s film was not meant as thriller fiction but rather as portentous reality.

I am not by nature fearful or squeamish. But after several minutes of watching Iran’s state-of-the-art warplanes firing on the familiar sites of Ben Gurion Airport, Haifa’s oil refineries, and Tel Aviv’s skyscrapers, I felt revolted. The simulated film was accompanied by ominous music, punctuated by the wail of ambulance sirens, and interspersed with actual footage of bearded Israeli medics evacuating dead and wounded Jews from the site of terror attacks.

The climax of the film is a missile barrage that destroys Tel Aviv, with skyscrapers melting a la the Twin Towers and plumes of smoke rising amidst a crescendo of sirens. However, lest only those of us who live in Israel are left trembling, the film concludes with an attack on the USS Abraham Lincoln, an American aircraft carrier in the Persian Gulf, reminiscent of movies about Pearl Harbor.

The video is labeled, “The simulation of Iran’s thunderous reaction against Israel’s contingent attack.” It starts with Iran’s Supreme Leader Ayatollah Khamenei declaring: “Anybody who thinks of attacking the Islamic Republic of Iran should be prepared to receive strong slaps and iron fists from the Armed Forces. … And America, its regional puppets and its guard dog – the Zionist regime – should know that the response of the Iranian nation to any kind of aggression, attacks or even threats will be a response that will make them collapse from within."

Let’s get this straight: Anyone who even thinks of or threatens to attack Iran’s nuclear installations will deserve the doomsday scenario then so graphically depicted.

“From the Holocaust we learn that if someone says he wants to destroy you, believe him.”

I tried to shrug off the film as mere Iranian bravado. But my mind kept replaying the famous words of Prime Minister Benyamin Netanyahu: “From the Holocaust we learn that if someone says he wants to destroy you, believe him.”

Of course, we do have the Israel Defense Forces, with its own state-of-the-art anti-aircraft missiles and Patriot batteries to ward off any such attack. And Israel should and must do everything in its power to protect the six million Jews of Israel from annihilation, either by nuclear or conventional attack.

But the brief and war-torn history of the modern State of Israel has taught us a trenchant lesson. After the miraculous victory of the Six-Day War, when Nassar’s threats of doom were turned into a stunning military victory, we here in Israel, heady with triumph, prided ourselves on “the best army in the Middle East.” Six years later came the calamity of the Yom Kippur war, with Syrian tanks trampling northern Israel and 2,000 of our soldiers killed. The Torah warns us that the God-absent attitude, “My strength and the might of my hand has accomplished all this,” is a precursor to disaster.

Iran is the modern name of Persia, and this is not the first time that the Persian government made plans to annihilate the Jewish People. The approaching holiday of Purim commemorates the events of 357-356 B.C.E. The king of Persia, egged on by his viceroy Haman, promulgated a decree of extermination that must have filled the Jews of that time with as much dread as the present TV film intends to do to us.

The response of the Jews was weeping, fasting, and repentance. Queen Esther, secretly Jewish, appealed to the king and a second decree was promulgated, empowering the Jews to fight and kill their enemies. Instead of annihilation, the Jews celebrated a great salvation, which we commemorate every year on Purim.

The theme of Purim is the sudden and dramatic reversal from certain doom to surprising redemption.

Therefore, I’d like to respond to Iran’s forecast of Israel’s destruction with a prophecy from Jewish sources. The sages of the Talmud 2,000 years ago predicted (as recorded in Yalkut Shimoni, Sefer Yeshayahu, ch. 499): In the future, Persia will make war on Arabia, and Arabia will go and ask help from Edom [the West]. Persia will destroy the world, and the world will be in chaos. The nation of Israel also will be confounded. But then God will say to the Jewish People: “Don’t worry. The time for your redemption has arrived. And this redemption will not be like the redemption from Egypt [which was followed by a difficult history]. This redemption will be a total redemption.”

Personally, while I avidly support Israel’s hardline stand on stopping Iran’s nuclear program, I’m also trying to repent and improve my actions. Judaism teaches that repentance can avert any heavenly decree. But lacking any widespread repentance, if I had to choose between dire future scenarios, I would put more stock in our forecast for the future than in Iran's.