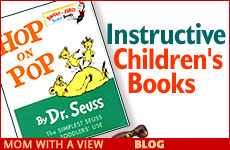 Everything I know about parenting I learned from children’s books.

Well not everything…but children’s books can be instructive, whether they mean to be or not.

I’ve lost count of the number of children’s books we’ve read over the years (and the number of times we’ve read them!) but suffice it to say it’s enough that my husband and I could (and sometimes do) have whole conversations composed solely of lines from children’s books (much to the chagrin of our actual children!). It’s not just that some of those books are so familiar (I’ve sworn off Caps for Sale for a lifetime – or at least until the next grandchild asks!), it’s that there is something about the cadence, the tone – and yes, the whimsy – that is just so compelling.

One thing I have learned from children’s books is to just enjoy the flights of fancy and the fantastic. I love the rhymes and imagination of Dr. Seuss. The words he invented actually deepen our appreciation of the beauty of language. And the creatures certainly expand our imaginations. I think that children – and adults – can share the marvel of where imagination and skill with words can take you. “Oh, The Places You’ll Go!”

Another favorite and real reading pleasure are the Frances books by Russell Hoban. If you haven’t read them, go immediately to amazon, do not pass go, and use your one-click button. Start with “Bread and Jam for Frances” or “A Baby Sister for Frances”. Frances’ parents (it’s a family of badgers) deal with all of her struggles with cleverness and humor. They never lose their patience. They never yell or scream. They are fun and wise. They are my role models! For example (spoiler alert), when Frances refuses to eat what her mother cooks and only wants bread and jam, that’s what she gets – for every meal, for every snack until…well I don’t want to give away the ending but let’s just say it’s a technique I wish I could use – and possibly apply to messy bedrooms as well.

Good children’s books bring us into the world and life of children so that we can react to them with greater understanding and empathy. There are so many pop psychology books dealing with introducing a new child into the family but, in my humble opinion, the best book on the topic is “A Baby Sister for Frances.” It perfectly captures the ambivalence the older sister feels about her new sibling – the desire to simultaneously run away and stay close (Frances hides under the dining room table), the desire to be acknowledged for her uniqueness along with her fear of being forgotten (“You know” says the father within earshot of his runaway daughter, “it is not the same house without Frances.”) and the importance of encouraging Frances to be a role model to the baby (“Even Gloria” said Mother, “as small as she is, can feel the difference…a girl looks up to an older sister. You know that.” she tells her husband).

I also enjoy the Arthur books by Marc Brown. He seems to explore some real issues without ever becoming preachy. Children are particularly drawn to “Arthur’s Underwear” (as they are to anything with underwear in the title) which deals with Arthur’s recurring dream about leaving his home without getting dressed. This is actually a common and classic scenario reflecting our insecurities and fear of exposure that is handled simply and with humor.

And who doesn’t love Curious George? Although we may object to the message that you can be mischievous and disobey the rules but as long as you “made our sad little Betsy happy again” it is all right, I think the free rein of his curiosity is healthy for young children. And mostly they just think it’s funny!

Although my husband dislikes the “Berenstain Bears” on the grounds that the books are sexist (the father is always wrong and on the one occasion where he is in the right, it says “It didn’t take a deep thinker…”) there certainly are good lessons to be learned. And the kids seem to enjoy them…something about bears…

I think in the end the power of children’s books, however, may not be so much in the moral lessons they are imparting as they are in the time and space they create for families – to sit together, to laugh at the antics of the creatures, to expand their use of understanding of language, to get perspective on the human condition – and to share the pleasure of good storytelling

There are, of course, other insights to glean from children’s books. I haven’t even begun to delve into Maurice Sendak’s “Where the Wild Things Are.” But for me, the ultimate teaching is the sense of awe that the Almighty as endowed His creation with the skill and imagination to create and illustrate stories that will delight millions for years to come.

With Memory, Time and Place Matter

Facing My Inevitable Death as I Grow Older

The Overprotective Mom in the Park