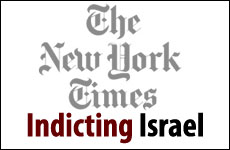 An in-depth study of New York Times' coverage of the Palestinian-Israeli conflict.

The New York Times remains one of the most influential newspapers in the world. Its print and web versions are read and relied upon by millions, including highly-educated news consumers and opinion-shapers in America and around the globe. Dubbed the "newspaper of record," The Times sets the topic and the tone for many other print and electronic media outlets. Its editorial decisions – what it deems most newsworthy, what it chooses to ignore or consign to back pages and how it frames the stories it covers – substantially shape the news landscape and, in turn, public perception of events. Given this, its presentation of the complex Palestinian-Israeli conflict is obviously of great importance and any pattern of bias must be taken seriously.

Camera’s investigation of New York Times coverage between July 1 and Dec. 31, 2011 reveals empirically that there is real cause for concern. The dominant finding of the study is a disproportionate, continuous, embedded indictment of Israel that dominates both news and commentary sections. Israeli views are downplayed while Palestinian perspectives, especially criticism of Israel, are amplified and even promoted. The net effect is an overarching message, woven into the fabric of the coverage, of Israeli fault and responsibility for the conflict.

With other media outlets emulating The Times, the distortion is greatly magnified.

When The Times presents criticism of Israel more than twice as often as it does criticism of the Palestinians, when it features the Palestinian perspective on the peace process nearly twice as often as it does the Israeli perspective, when it consistently omits the context of Israel's blockade of Gaza, when it rehashes the actions of the Israeli military aboard a Turkish ship but leaves out the precipitating violence by pro-Palestinian activists, and when it de-emphasizes Palestinian aggression and incitement while headlining Israeli defensive strikes, readers can be profoundly deceived about the realities. And when other media outlets emulate The Times, the effect of the distortion is greatly magnified.

Such negative and skewed treatment of the Jewish state is not new. It follows a long history of The New York Times distorting the news to avoid the appearance of espousing so-called Jewish causes. In her book Buried by The Times: The Holocaust and America's Most Important Newspaper, Northeastern University journalism professor Laurel Leff described how The New York Times deliberately downplayed news about Nazi persecution and the genocide of European Jews. According to Leff, the decision to avoid presenting Jews as victims of Hitler was consciously made by the publisher to ensure the newspaper would not appear "too Jewish."

Former Times Executive Editor Max Frankel said the same in a 2001 article, in which he lamented the "staggering, staining failure of The New York Times to depict Hitler's methodical extermination of the Jews of Europe as a horror beyond all other horrors in World War II..." He noted that publisher Arthur Hayes Sulzberger "went to great lengths to avoid having The Times branded a 'Jewish newspaper.’”

The same mind-set continued to shape the news years later. Columbia University journalism professor Ari L. Goldman, a former New York Times reporter, recounted how his dispatches about the 1991 violence by African-Americans against Jews in Crown Heights were altered to fit the "frame" preferred by editors, who transformed them into stories about a purported race war between blacks and whites instead of the anti-Jewish attacks that Goldman had witnessed and described.

A similar pattern of minimizing threats to Jews was documented in Camera’s 2002 study, "The New York Times Skews Israeli-Palestinian Crisis," which exposed the newspaper's distorted emphasis on alleged wrongdoing by the Jewish state during a period of unprecedented terrorism against Israel. While amplifying news of Israeli military responses, it ignored or minimized Palestinian attacks.' The message was clear-Israel was culpable.

Ten years later, the message is the same.

Twice as many articles were critical of Israel.

Criticism of Israel is found to be a pervasive motif, continuously woven into the reportage. The Jewish state is criticized more than twice as often as the Palestinians. Of 275 passages in the news pages classified as criticism according to the study's stringent criteria, 187 were critical of Israel; fewer than half as many – 88 – were critical of the Palestinians. Some of these criticisms were expressed in the voices of the journalists themselves, often in violation of professional norms against editorializing in news reporting. Journalists weighed in 21 times with hostile views of Israel, and only 9 times with criticism of the Palestinians.

But the broader numerical discrepancy in criticism does not by itself tell the entire story. The study, therefore, zooms in on specific topics within the newspaper's coverage of the Palestinian-Israeli conflict to reveal a consistent double standard in the Times' rendering of events.

Among the topics frequently discussed on the news pages and analyzed in the study during the second half of 2011 were:

The Peace Process and Palestinian Unilateral Declaration of Independence (UDI)

Although both sides obviously held strong opinions on the peace process, as well as on the merits or demerits of the Palestinian resort to unilateralism, the newspaper did not present each side's views as equally newsworthy and chose instead to highlight Palestinian opinion.

The newspaper's reporting about the Mavi Marmara, a Turkish ship carrying pro-Palestinian activists, lacked crucial context and relayed criticism in a lopsided manner. Of 37 articles that referenced Israel's use of force on the ship, only 8 mentioned the activists' violence that necessitated the use of firearms by Israeli commandos. Twenty passages conveyed criticism of Israel's actions relating to the Mavi Marmara incident, and only 5 conveyed criticism of the pro-Palestinian activists on board.

Even when describing a U.N. report that criticized both sides in roughly equal measure, The New York Times referred to the report's criticism of Israel 12 times, but only mentioned its criticism of the activists 4 times.

Essential context was likewise missing from the newspaper's references to what it described as an Israeli "siege" on the Gaza Strip. Only 6 of 37 articles mentioning Israel's border policies and naval blockade on Gaza noted Israel's stated goal of preventing weapons from entering the Gaza Strip. And even fewer reminded readers that weapons in that territory are frequently fired into Israel.

The Times’ coverage of violence was marked by a double standard that highlighted Israeli attacks and de-emphasized Palestinian ones. Twelve headlines explicitly mentioned Palestinian fatalities; none explicitly referred to Israeli deaths, even though 14 Israelis were killed during the study period. There was also disproportionate emphasis on vandalism and non-deadly arson by radical Israeli settlers – 11 articles – in comparison to Palestinian stoning attacks that resulted in deaths – 4 articles.

Least newsworthy of all, according to The New York Times, was the steady stream of anti-coexistence, anti-Israel and anti-Semitic rhetoric by the Palestinian leadership. Although this incitement perpetuates the conflict, only one article discussed it, and that article focused on criticism of those who chronicle the Palestinian hate rhetoric nearly as much as it did on the rhetoric itself. While Israeli actions were routinely cast as obstacles to peace, the Palestinian Authority's refusal to recognize a Jewish state was never described as an obstacle.

On the newspaper's opinion pages, unsigned editorials consistently blamed Israel for the Palestinian-Israeli conflict. And despite assertions by The New York Times that "Op-Ed editors tend to look for articles that cover subjects and make arguments that have not been articulated elsewhere in the editorial space," this anti-Israel view was mirrored throughout the opinion pages, with columns and guest Op-Eds overwhelmingly in accord with The New York Times' editorial board. Over a period of nine months, from July 2011 through March 2012, 6 of 7 editorials, 5 of 6 columns, and 4 of 7 Op-Eds about the Palestinian-Israeli conflict predominantly criticized Israel. None predominantly criticized the Palestinians.

Not only were the opinion pages unbalanced, but they heavily reflected extremist views by radical anti-Israel activists. For example, the newspaper published a column characterizing Israel's tolerance toward homosexuals as a devious ploy to conceal abuses of Palestinian human rights.

The newspaper's ethical code assures readers that "the goal of The New York Times is to cover the news as impartially as possible." But Arthur Brisbane, who was The New York Times' public editor (ombudsman) during the study period, acknowledged that politics do, in fact, influence the newspaper's output. In his farewell column, he described a worldview of "political and cultural progressivism" that "virtually bleeds through the fabric of The Times." As a result, the newspaper treats certain topics "more like causes than news subjects."

This study leaves no doubt that the Palestinian-Israeli conflict is one such topic. Although the conflict is a matter of great controversy, with loud voices on all sides seeking to make their case, only one side's concerns are promoted in The Times, while the opposing side is marginalized. This clear pattern is far from a mere academic concern. More exposure for a viewpoint gives it more influence. By force of repetition, then, the Palestinian narrative that indicts Israel for the conflict becomes more familiar to, and as a result, more accepted by, readers of The New York Times.

In diminishing the Israeli perspective, The New York Times sends another unambiguous message: Laurel Leff explained when describing the newspaper's minimization of the Holocaust that readers at the time were led to believe, "If The New York Times doesn't think this is an important story, why should we?"

Indicting Israel aims to set the record straight on the newspaper's partisan, unprofessional coverage of the Jewish state. It provides detailed evidence that allows readers convincingly to challenge the newspaper's biased journalism and to ask, "If The New York Times doesn't take its own reputation for journalistic integrity seriously, why should we?"

Ricki Hollander is a senior analyst at CAMERA, Committee for Accuracy in Middle East Reporting in America.

Gilead Ini is a senior research analyst at the Committee for Accuracy in Middle East Reporting in America.

Turning A Blind Eye to Murder
The Promise Of The Land
Which Chat Are You On?: Parshas Behar/Lag Ba’Omer
Do You Like Slow-Cooked Food? Thank the Jews
Comments
MOST POPULAR IN Media Objectivity
Our privacy policy