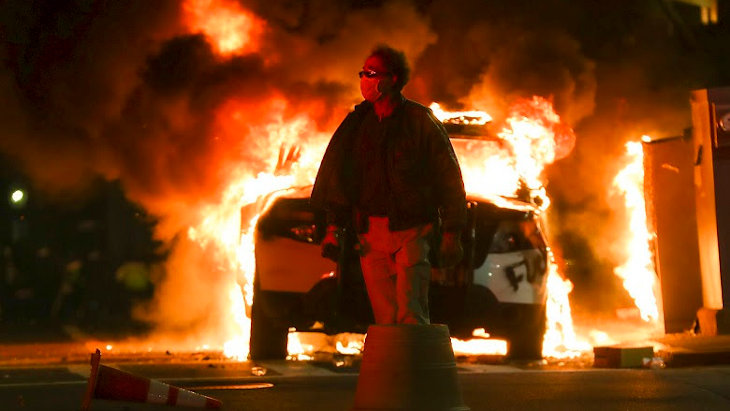 The killing of George Floyd was intolerable. So is the mayhem.

“There are two races of men in this world,” wrote the psychoanalyst Viktor Frankl in Man’s Search for Meaning , the profoundly influential book he published about his experiences in the Nazi concentration camps. “Only these two – the ‘race’ of the decent man and the ‘race’ of the indecent man. Both are found everywhere; they penetrate into all groups of society. No group consists entirely of decent or indecent people.”

Derek Chauvin, the Minneapolis police officer who used his knee to press George Floyd’s neck to the ground until he died in agony, belongs to the race of the indecent. So do Gregory McMichael – an ex-cop – and his son Travis McMichael, the two Georgia men who pursued and gunned down an unarmed Ahmaud Arbery after seeing him jog past their home. So does any police officer who deliberately uses deadly violence against someone who has no weapon and poses no threat.

The race of the indecent does not include men and women who are infuriated at the sight of injustice or police brutality. It does not include those who respond with nonviolent protests, demonstrations, marches, or civil disobedience. There is nothing indecent about those who cry out in horror and anger at the death of Floyd and Arbery, or demand political change to prevent such atrocities, or insist that the full weight of the law be brought to bear against those responsible for committing them. 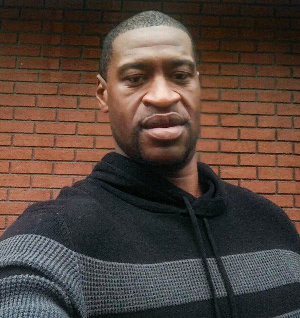 But the legions of the indecent most certainly do include those whose reaction to the terrible violence inflicted against Floyd is to inflict their own violence – smashing, burning, robbing, and even killing – against others. There is nothing decent about the riots that erupted in dozens of cities over the last few days. There was only pointless destruction and inexcusable lawlessness. More lives were lost and countless businesses ruined. If the killing of Floyd was a sickening illustration of what the “race of the indecent” are responsible for, so is the anguish of black business owners, weeping to see their life’s savings reduced to rubble and ash.

Sickening, too, are those on the sidelines cheering as neighborhoods go up in flames, such as the filmmaker Michael Moore extolling the “good citizens burning down the evil police precinct,” or Essence magazine publishing a column urging rioters to “Burn It All Down.”

During the 1992 Los Angeles riots, in which scores of people died and hundreds of millions of dollars in damage was inflicted on mostly Korean-owned businesses, the rap artist Sister Souljah was one of those cheerleaders. In an interview with the Washington Post, she applauded the “rebellion” that was shattering much of the city and endorsed even more bloodshed:

I mean, if black people kill black people every day, why not have a week and kill white people? You understand what I'm saying? In other words, white people, this government and that mayor were well aware of the fact that black people were dying every day in Los Angeles under gang violence. So if you're a gang member and you would normally be killing somebody, why not kill a white person?

The most memorable response to Souljah’s incitement came from Bill Clinton, the Arkansas governor who was then running for president. Speaking before Jesse Jackson’s Rainbow Coalition in June, Clinton condemned the rapper’s words . He quoted her poisonous comments to the Post and an earlier interview in which she said all whites have a “low-down, dirty nature” and that “if there are any good white people, I haven’t met them.” Clinton told his audience: “If you took the words ‘white’ and ‘black,’ and you reversed them, you might think David Duke was giving that speech.”

Clinton took some heat for his rebuke – Souljah called him a racist and Jackson defended her. But most Americans appreciated his public stand against extremism. The phrase “Sister Souljah moment” entered the lexicon as a reference to the repudiation of extremists, even when that repudiation might rub one’s allies the wrong way.

America today, far more bitterly polarized than it was in 1992, could really use some Sister Souljah moments. But there is little inclination in political circles, and even less among the media, to cool the fevers of racial grievance.

In a society where almost everything is bitterly disputed, the revulsion over Floyd’s death, and the desire to see his killers brought to justice, is practically universal.

No one thinks that what happened to George Floyd was anything but horrifying and enraging. In a society where almost everything is bitterly disputed, the revulsion over Floyd’s death, and the desire to see his killers brought to justice, is practically universal. This is not a country that thinks it’s OK for police to kill black men. “I hope these cops are dealt with good and hard,” conservative talk host Rush Limbaugh told his huge radio audience. What they did to Floyd, he said, “makes me so mad I can’t see straight.”

There was a time in this country when black men could indeed be killed by whites with impunity, and when those witnessing their deaths were apt to be celebrating them. Morally, psychologically, and politically, we are light years removed from that era. Yet it has become politically incorrect to say so. Anyone who tries can expect to be shouted down by loud voices insisting that slavery and Jim Crow stamped America forever, leaving it irremediably racist to the core.

Police brutality is too common in this country. Some people have no business being entrusted with a gun, a badge, and the power to arrest. All the same, the Washington Post noted last year, killings by cops are “rare outcomes” in a nation with “millions of encounters between police officers and the public.” When those rare outcomes do occur, according to the Post (which has been tracking the data since 2014, when Michael Brown was killed by police in Ferguson, Mo.), the racial breakdown is surprisingly consistent: “45% white men; 23% black men; and 16% Hispanic men. Women have accounted for about 5% of those killed, and people in mental distress about 25% of all shootings.” In the overwhelming majority of cases, the person killed was armed; only 4% had no weapon. The killing of George Floyd, in other words, was an exception, not the rule. Saying so doesn’t make his fate less appalling, it makes it more so. To see such a thing happen to a fellow citizen is especially harrowing because it is such a desecration of what America stands for.

It was an intolerable killing, and no one is tolerating it. The men responsible were fired within a day. Chauvin has been charged with murder.

But just as intolerable is the stupefying mayhem being unleashed across the country in Floyd’s name.

“I am heartbroken. Waking up this morning to see Minneapolis on fire would be something that would devastate Floyd,” his fiancée Courteney Ross told the Minnesota Star Tribune. She described him as the most spiritual man she ever knew – “he stood up for people, he was there for people when they were down, he loved people that were thrown away.”

His employer, Jovanni Thunstrom, felt the same way: “He didn’t discriminate,” Jovanni said in an interview. “Whether you were Hispanic, you were black, you were white – he treated everybody with respect and that’s what I love about him.”

As Viktor Frankl might have said, Floyd was of the race of the decent man. It only compounds the indecency of his death that it is being used as a justification for riots.

Is Hanukkah Overrated?: This Video Will Make Your Holiday More Meaningful
For Every Individual, A Torah Scroll
Allegiance To The Monarch
Meet the Real You: Yom Kippur
Comments
MOST POPULAR IN Current Issues
Our privacy policy
Aish.com Is Looking for Great Writers