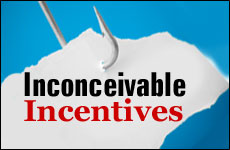 Jewlarious Satire: How badly do some Jewish communities want and need to recruit new members to join their congregations? Badly enough that a growing number of synagogues are actually offering valuable incentives to get Jews to relocate to help keep small congregations alive.

These incentives have included:

Temple Vey Iz Mir will pay off your bookie.

Communities are offering these incentives because they realize it’s difficult for families to uproot themselves, and they are looking to grow. Naturally, however, some incentives are more valuable and attractive than others. And some scarcely seem desirable at all. In fact, they seem so unappealing, one wonders what could have possibly been going through the minds of those deciding to offer them.

But don’t take my word for it – you be the judge. Here, then, is a selection of the least-popular incentives offered to attract new members to Jewish communities.

Temple Rosh Kodesh, in Parsippany, New Jersey is offering a free concert in your own home from 6 year old Jackie Mason impersonator Shimon Pinchas. Pinchas has not only memorized every one of funny man Jackie Mason’s routines, but also bears an uncanny resemblance to the comedian. The concert includes both a pre-concert meet & greet and a post-concert autograph-signing and photo-op. Pinchas’s favorite Jackie Mason joke: “My grandfather always said, ‘Don’t watch your money; watch your health.’ So one day while I was watching my health, someone stole my money. It was my grandfather.”

Congregation Beth Dayenu, in Ogden, Utah, is sponsoring a rare opportunity to serve as the Kevin the Kosher Dill Pickle Mascot for the Next Year in Jerusalem Deli. Males or females accepted. One-size-fits-all costume provided. Appearances guaranteed not only at the deli, but also at shopping center openings, school fairs, parties and bar mitzvahs. Will receive instruction in hip-hop dancing and in singing the mascot song, “Shalom, I’m Kevin the Kosher Dill Pickle!”

Complimentary one year’s admission to Rabbi Shmuel Bundenberger’s Bris Under the Stars. (A $675 value.) The circumcision ceremony has for too long been relegated to the stuffy indoors. It took a visionary mohel, Rabbi Shmuel Bundenberger, from Mobile, Alabama’s Temple Shabbat Shalom, to break it out into the open. Held weekly on the site of the old Starlight Drive-in, the event features the rabbi’s comedy monologue, jugglers, Jewish fast food, close-up magicians, a klezmer band, and fireworks. Included: a DVD of the event’s highlights, a photo with the baby, and a copy of the rabbi’s new book, “A Lighthearted History of Circumcision.”

Most of us would agree that life is a gamble, but for those with real gambling debts, the kind folks at Temple Vey Iz Mir, just outside Houston, will pay off your bookie because, according to Rabbi Yitzchak Feldershmeir, “A new congregant with two broken legs isn’t going to be attending many synagogue functions.” Feldershmeir is proud of the fact that over the years, three of the bookies have found a more legitimate occupation and one has converted to Judaism. For their part, Houston’s bookies are favoring Feldershmeir as 2013 Rabbi of the Year. 2-1 odds.

While Bismarck, North Dakota’s Temple Kadosh Kadosh Kadosh unfortunately lacks the budget to send new community members to Israel, they have a second-best option: an all-expense-paid deluxe dinner with fellow community members who have made the journey to the Land of Milk and Honey—and are willing to share everything about their trip. The dinner will include personal memories, a Q&A session, photos, souvenirs, and a tree planted in the Holy Land in honor of the new community members. It’s almost like being in Israel personally! It’s also perfect for armchair travelers and those who just plain hate travelling. And for those who’ve already been to Israel, a similar program exists with community members who’ve been to Miami Beach.

Ever dreamed of gaining lifetime free admission to the world’s first Jewish amusement park. Move your family to Oskaoloosa, Iowa, and your dream will come true, thanks to Temple Beth Cornfield. At the Chosen People Amusement Park it sponsors, you’ll thrill to the 100% Borscht Water Slide, Rabbinical Scholars of the Caribbean ride, Stock Market Roller Coaster, and It’s A Mench World After All extravaganza. And the food – better than your Bubbe used to make. Don’t miss the popular chocolate-covered gefilte fish on a stick!

We all love Israel and want to see it safe and protected. Is there anything we personally can do to help ensure that? Now there is! Thanks to Eugene, Oregon’s Temple Gornisht Helfn, new community members are automatically signed up for a year’s service in the Israeli Defense Force! Imagine the envy of your friends and family when they find out that you will be on the front lines helping preserve the sanctity of the State of Israel. All weapons, uniforms and release papers included. Forget “Next year in Jerusalem!” This year in Jerusalem!

The 25 Weirdest Menorahs You’ve Ever Seen

Boo!
Scientific Curiosity and the Divine Encounter
Mind Over Milkshakes
Love the Convert
Comments
MOST POPULAR IN Jewlarious
Our privacy policy
Aish.com Is Looking for Great Writers