In Safe Spaces on Campus, No Jews Allowed 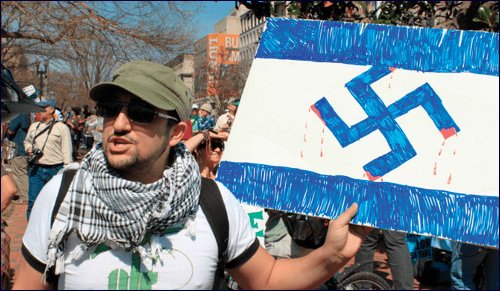 College students have risen up to fight racism on campuses. But it is often those very same students who subject Jewish students to anti-Semitism.

This article is excerpted from a longer piece in the Tower.

When Arielle Mokhtarzadeh arrived at University of California, Berkeley, to attend the annual Students of Color Conference, she had no way of knowing that she would be leaving as a victim of anti-Semitism.

The conference has maintained a reputation for 27 years as being a “safe space” where students of color, as well as white progressive allies, can discuss issues of structural and cultural inequality on college campuses.

For Mokhtarzadeh, an Iranian Jew at UCLA, her freshman year was punctuated by incidents of anti-Semitism that were both personal and met with national controversy. She was shocked during her first quarter in school, when students entered the Bruin Cafe to see the phrase “Hitler did nothing wrong” etched into a table. Months later, Mokhtarzadeh’s friend Rachel Beyda was temporarily denied a student government leadership position based solely on her Jewish identity, an event that made news nationwide.

The campus was supposed to be her new home, her new safe space – so why didn’t she feel that way? She went to the conference hoping for some answers.

She was horrified when the discussion became an attack on Israel – and soon devolved into attacks on the Jews.

But on the first day there, she was horrified when the discussion became an attack on Israel – and soon devolved into attacks on the Jews.

“Over the course of what was probably no longer than an hour, my history was denied, the murder of my people was justified, and a movement whose sole purpose is the destruction of the Jewish homeland was glorified. Statements were made justifying the ruthless murder of innocent Israeli civilians, blatantly denying Jewish indigeneity in the land, and denying the Holocaust in which six million Jews were murdered,” she said. “Why anyone in their right mind would accept these slanders as truths baffles me. But they did. These statements, and others, were met with endless snaps and cheers. I was taken aback.”

Mokhtarzadeh walked out on the verge of tears. “It was in that moment, during that conference, that I realized that every identity and every intersection of identity was to be welcomed and championed in progressive spaces – except mine.”

The recent surge of progressive activism on college campuses across the country has led to many debates on the merits of concepts such as “microaggressions” and “safe spaces” in educational settings that should respect free speech and dialogue. Student uprisings against racial injustice and discrimination at Yale, the University of Missouri and dozens of other universities have shown the power of students who have banded together against institutionalized racism in academia and the student body.

But little has been said about how the idea of “intersectionality” – the idea that all struggles are connected and must be combated by allies – has created a dubious bond between the progressive movement and pro-Palestinian activists who often engage in the same racist and discriminatory discourse they claim to fight. As a result of this alliance, progressive Jewish students are often subjected to a double standard not applied to their peers – an Israel litmus test to prove their loyalties to social justice.

Progressive Jewish students have said they feel like they have to hide their Jewish identity in order to belong in these movements. Such was the case of Michael Stephenson, a Jewish sophomore at the University of Missouri who participated in the racial justice protests last fall, and yet felt his Jewish identity undercut his “social justice” credibility. He told the Jewish Week newspaper that there were countless moments when his social justice cred was questioned, including statements that “bordered on anti-Semitism.”

The progressive college movement has pushed anti-Semitic rhetoric in the name of progressive values.

While the effectiveness of campus protests is worthy of debate, it should remain undeniable – and undeniably troubling – that the progressive college movement, and specifically pro-Palestinian groups within it, have pushed anti-Semitic rhetoric in the name of progressive values. For example, the Students for Justice in Palestine (SJP) chapter at Northeastern University likes to fashion itself a progressive organization, but in 2012 the school’s SJP adviser was recorded telling members to be proud to be called an anti-Semite – to wear it as a “sign of distinction. This proves that I’m working for the right side, the just cause.”

The ramifications of ignoring the normalization of anti-Semitism cannot be understated: The most recent FBI hate crime report found that 58.2 percent of hate crimes motivated by religious bias were targeted at Jews. Jews make up 2.2 percent of the American population, so the FBI’s statistics make it clear that Jews are the most disproportionately attacked religious group in America. It should be troubling to everyone that an SJP member at Temple University physically assaulted a pro-Israel Jewish student two years ago, calling him a “Zionist baby killer.” But it should be far more troubling that the SJP chapter at Temple (like all SJP chapters) promotes itself as a progressive organization, claiming solidarity with movements such as Black Lives Matter.

Another incident occurred at UC Santa Cruz, when Jewish student Daniel Bernstein, an elected representative on his college council, received a message from the SJP-aligned chair of the student council instructing him to abstain from a vote on divestment from Israel because he was elected with a “Jewish agenda.”

“I was literally in awe,” Bernstein said. “Just the phrase ‘Jewish agenda’ is so volatile and anti-Semitic. To think that my own council members think that I am unable to uphold their beliefs and ideals in the greater student assembly because I am Jewish is beyond anything I ever thought would be told to me.”

Northeastern University’s SJP chapter was so persistent in anti-Semitic harassment – from defacing the statue of a Jewish donor to disrupting Holocaust awareness events – that the university was forced to temporarily suspend the organization in 2014. The SJP chapter at Vassar College even tweeted Nazi propaganda from 1944.

When these events happen, there are no outcries from the progressive community. Tyler Fredricks, a student at Duke, has noticed the variation in responses from the SJP-aligned progressive crowd when instances of anti-Semitism occur.

“When someone wrote ‘No n – –s, whites only’ on a Black Lives Matter flyer, the Duke community held a march where over a hundred students marched and rallied in support. They did the same thing when someone wrote a homophobic slur in the dorms,” Fredricks said. “When someone wrote anti-Semitic comments on a Duke Friends of Israel flyer, there was no march, rally or campus outrage.”

This pattern has made Jews of all ages question their place within higher education. “Jewish students and their parents are intensely apprehensive and insecure about this movement,” Mark Yudof, the former president of the University of California system, told the New York Times. “I hear it all the time: Where can I send my kids that will be safe for them as Jews?”

Two more questions come to mind: If the progressives who have fought against racial injustice and bigotry for so long eventually become the ones who perpetuate it, who will remain to call them out? At this rate, if anti-Semitism is normalized through the efforts of the rising progressive movements on college campuses, what will the future look like for Jewish college students?

Outreach is imperative now. This means making the progressive community understand the ramifications of anti-Semitic speech. Engaging this audience – through trips to Israel, visits to Holocaust museums, and even simply interacting with Jewish students – can help change the narrative.

The complete article can be found in the Tower.

A Message for All Jews

The Murder of Nick Berg