At the equivalent of 105 in human years, our dog’s time had come. I miss him.

No sooner had my daughter posted the news of Ken’s passing than the condolence comments and crying emojis poured online. Friends and relatives called to express their sympathy. A neighbor hugged me in the supermarket, tearful, saying how much she would miss him.

But at the equivalent of 105 in human years, our dog’s time had come. Mischievous to the end, our beagle-lab mix had made a final, illicit foray into the kitchen garbage for meat scraps, which were fatally entwined with bits of aluminum foil. It did him in.

We adopted him when he was a year old, quelling demands for a dog from our ten-year-old son. Ken was charming but socially needy – a beagle trait I discovered when I came home to see that he had dealt with his anxiety over my absence from home by chewing through the arm of the living room couch, topping it off with an underwear chaser. Over the years we tried various gambits to keep both Ken and our furniture secure. Suffice to say that Ken’s lack of a dog whisperer prompted frequent redecorating. 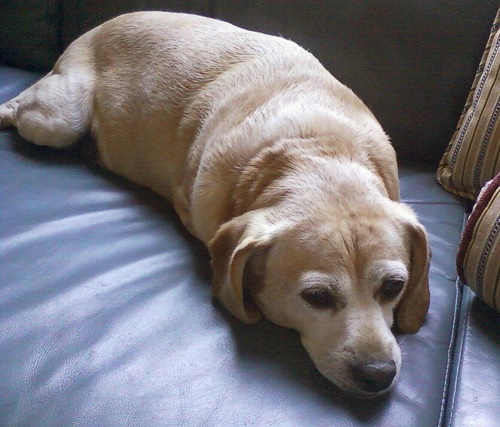 Since I worked from home, every day was “take your dog to work day,” which both Ken and I found highly satisfying. Despite being only 30 pounds, he made me feel safe. His job was to protect home and hearth, and until his hearing started to go last year, no stranger approached without Ken woofing a shrill warning.

Ken lived in an era where dogs had become the new kids. I rolled my eyes when I dropped him at the groomer and heard her say, “Don’t worry, sweetie. Mommy will be back soon.” With four kids of my own, I was pretty clear that I was not Ken’s “Mommy.” I laughed at seeing sweater-clad dogs in strollers, advertisements for doggy day camp, doggy spas, holistic vet care, and doggy boutiques. Yet there was something poignant in them, too. As the childless and single population keeps rising steadily, pampering pooches offers a way for people to express their human yearning to nurture and to love. (I wonder if dressing dogs like children and treating them like four-legged celebrities explains another modern trend: doggy therapy.)

I admit that I wasn’t totally immune from the impact of this zeitgeist. I was relieved when the staff at The Loved Dog emailed a picture and reported that Ken was “socializing well” with other dogs while we were out of town. And I bought a raincoat for him because he so detested being out in the rain. The London Fog-style gear made him look like a doggy detective, his slim rawhide bone jutting out like a cigarette at a rakish angle.

Most Orthodox families don’t have dogs – having to take care of six or eight kids is more than enough responsibility, thank you very much. So when we welcomed guests who were trying out a traditional Shabbat experience, Ken’s warm greeting made our family seem more relatable and familiar. Our sleepover guests were also forgiving, or at least pretended to be, when Ken trotted into the dining room with the remains of a cinnamon Danish or box of Milk Duds in his mouth he had filched from their unzipped luggage.

“My wife would have killed me if she knew I was eating those again,” mumbled one abashed diner at our table.

I miss that old dog. I am still startled when he doesn’t greet me at the door. It feels wasteful scraping leftovers into the garbage instead of into his bowl. He made us laugh with his doggy antics and he had an uncanny sense when something was wrong. When I lay in bed with one of my frequent migraines, he lay next to me protectively, baring his teeth if anyone tried to move him from the bed, even my husband.

In Hebrew, the word for dog is kelev, which means “like a heart.” Anyone who has loved a dog can relate to how true this is.

A few days after we said goodbye to Ken, I asked one of my sons, “Do you think I’d be crazy to get another dog?” I was already gazing longingly at dogs on parade with their “human companions” in the neighborhood.

Before he could answer, his four-year-old daughter, witness to many of Ken’s messy antics, marched over and warned, “Don’t get another dog, Nana. Dogs are TROUBLE.”