I'm Not Messy; I'm a Genius 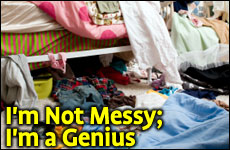 January is national “Get Organized Month” and I just may get around to organizing… by next January.

Our family has a time-honored tradition, nearly as sacred as Chinese take-out on Sunday nights: before company arrives, we frantically scoop up piles of mail, library books, sunglasses, keys, the dog’s leash and anything else parked on the dining room table, and shove it on to the kitchen table. Sometimes, the piles of stuff grow mysteriously overnight–we have no idea how this happens-- and we throw the spillover into a bedroom and shut the door. Yet this hallowed tradition is under assault from the chattering classes of clutter control. These nattering nabobs of neatness have declared January “Get Organized Month,” a proclamation that has professional organizers singing in the Hallelluyah choir.

This timing of this organizing dictate is cruel!

I also have a time-honored tradition of arriving late to each January’s clarion call to streamline my stuff. See, it’s nearly February and I’m only now getting around to reading articles that I tore out the newspaper (I still get one of those) that advise me to invest in paper scanners and shredders, along with cord caddy cable winders (try saying that fast three times!) and finish the job of going paperless on all my bills. I imagine that the offices of the supremely organized are nearly Zen-like in austerity, and that I would cry if I saw one in person.

This timing of this organizing dictate is cruel. In January, many of us have not yet abandoned our New Year’s pledge to shape up, and are still dragging ourselves to the gym four times a week, proving that we have not wasted the money on our new gym memberships. Yet tired as we are after a long day at work and working toward a body whose flesh is more marble than marble cake, the nation’s filing fetishists insist that we not only make time to lose weight from our hips, but also liberate our family rooms, closets and garages from the tyranny of unclaimed jackets, unidentifiable electrical cords, and moldering wicker baskets.

Professional organizers guilt-trip you by asking, “Would you like to buy some new clothes, but can’t open your jammed closet door?,” implying that this is a bad thing. Then they woo you with psuedo-profundities: “Clutter is the stuff that we move away to find what we want.” Well, duh! If everything was exactly where we thought it was, life would be too easy, and we would spend less time working on our spiritual growth and learning patience. The uber-organized among us, who have just the right place for every odd thing, including those itty-bitty screwdrivers meant to tighten your glasses, never experience the thrill of unexpected discovery. Last week, looking for a client’s phone number that I had jotted on the back of a bank receipt, I found one of my kid’s school reports on apes. The report was a few years old, and I had no idea how it got on my desk, but there it was: a special “Aha!” moment that allowed me to kvell in my child’s middle-school academic achievements. I tell you, Lewis and Clark didn’t make this many discoveries when they crossed the Mississippi river as I do every week at home. I sweep away a bunch of papers, looking for a file, and voila! I am reunited with the earring that had gone missing weeks earlier. Professional organizers rarely enjoy these thrilling moments. How tragic.

Now don’t misunderstand: I am not one of those mess apologists who wax romantic about disorganization. These folks utter equally ridiculous bromides: “Mess can vibrate beyond its own confines and connect to the larger world,” said one advocate of material anarchy. Oh, please. If you have things vibrating on your desk you’d better clean it up before the kids go looking for the stapler.

I’d like to pretend that my cluttered desk reveals my creative genius, but honesty, all it reveals is my antipathy toward anything resembling housework. Realizing this, I once hired a professional organizer. She threatened me with color-coded filing labels and organized my desk in a whirlwind of efficiency. But my clean desk felt lonely, and an hour after she left, I defiantly flung some papers around just to reclaim that homey feeling.

You can plunk down thousands of dollars on organizing systems and expertise, but for my money, the most effective organizing supplies are the floor, closets, and under the beds. The least helpful things are copies of “Real Simple” magazine, which show you how to have a home that looks clinically organized—if you go for that look. Let me tell you, the people whose homes are featured in magazines like that do not have two sets of dishes and cookware in their kitchens and a collection of books that adds titles faster than the Library of Congress. The Jewish version of this magazine might be called, “Simple? Get Real!”

My messy desk may not prove conclusively that I’m a creative genius, but that’s my story and I’m sticking to it.

Archeologist Allegedly Discover Controversial Tomb of "Yankele the Butcher"
Were Adam and Eve Jewish?
How I Learned to Love the Multiverse
10 Big Jewish Inventions
Comments