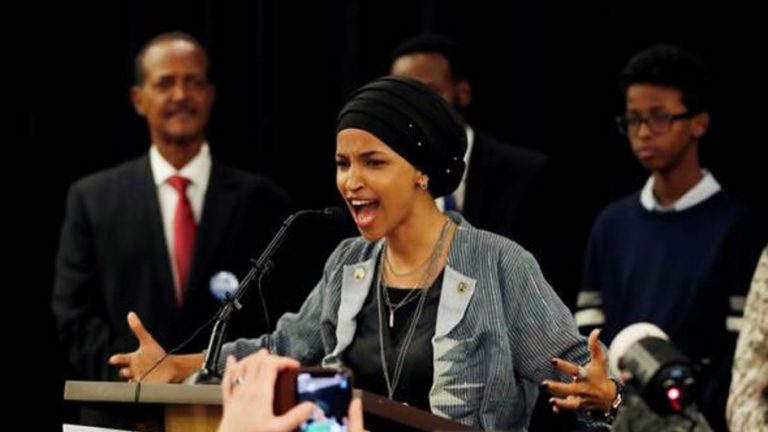 A lesson for Ilhan Omar and like-minded progressives who cross the line all too often.

For someone who claims not to be anti-Semitic, Rep. Ilhan Omar (D., Minn.) sure says a lot of anti-Semitic things. Just look at the past two months. In January, Omar defended a tweet from 2012 in which she called Israel "evil" and said the Jewish state "has hypnotized the world," expressing annoyance at the notion that her comments "would be offensive to Jewish Americans." She later called her choice of words "unfortunate." Then early last month, Omar accused American politicians of supporting the Jewish state because of the "Benjamins," a slang term for money. When asked who is paying American leaders to be pro-Israel, she simply responded, "AIPAC," an acronym for the American Israel Public Affairs Committee. Omar later apologized but still called AIPAC "problematic." She then praised a Democratic activist while retweeting a thread in which he said AIPAC's lobbying is "about the Benjamins."

On Wednesday, Omar went even further with her anti-Semitic remarks. She appeared at Busboys and Poets, a restaurant in Washington, D.C., whose owner has his own history of peddling anti-Semitic canards, to discuss a range of progressive issues. Naturally, the evening focused primarily on anti-Semitism and Israel. "So for me," Omar said, "I want to talk about the political influence in this country that says it is okay to push for allegiance to a foreign country." Her comment is the classic anti-Semitic charge of dual loyalty, in this context that Jewish Americans put Israel's interests above America's. There is clearly a pattern here.

But Omar was not done. She also had the audacity to accuse those who say her comments are anti-Semitic of bigotry themselves. "What I am fearful of – because both Rashida [Tlaib] and I are Muslim – is that a lot of our Jewish colleagues and constituents go to thinking that everything we say about Israel is anti-Semitic because we are Muslim," Omar said. "It's something designed to end the debate." Omar does not seem to realize that she is the one making false accusations to "end the debate." No serious person condemning her comments cares what religion she practices. Was the Democratic leadership practicing Islamophobia when it called Omar's remarks from last month anti-Semitic? The substance of the comments is what matters, not her faith.

Omar is of course attempting to couch her views as legitimate criticism of Israel, and to say those who call her comments anti-Semitic do not want to hear it. Indeed, many anti-Zionists and others who harshly oppose Israel, especially progressives, defend their efforts against the Jewish state by claiming, first, that they are simply criticizing the Israeli government's policies and, second, that pro-Israel voices dismiss such criticism as anti-Semitic to shut down debate. Just look at how the discussion began Wednesday night. According to Jewish Insider, the moderator asked what "we as a community here can do to support you criticizing Israel for some of the war crimes that it has done so that it's not seen as ‘you're anti-Semitic'? Because you're not criticizing the religion, you're not criticizing Jewish people, you're criticizing the government policies."

Accusing Israel of genocide – or of running an apartheid state, as Omar did on Wednesday – is a shameful lie that cannot be labeled legitimate criticism.

This line of defense, which many on the political left believe wholeheartedly, is a straw man. Of course it is not anti-Semitic to criticize the policies of the state of Israel. No serious person, including supporters of Israel, would say otherwise. But Omar and many like-minded progressives have, through their words and actions, crossed the line from legitimate criticism to anti-Semitism.

Criticism becomes bigotry when it involves demonizing and delegitimizing Israel. Accusing Israel of genocide – or of running an apartheid state, as Omar did on Wednesday – is a shameful lie that cannot be labeled legitimate criticism. The same goes for describing Israel, the only democracy in the Middle East, as a human rights abuser on the level of China and North Korea. Those who support the Boycott, Divestment, and Sanctions (BDS) movement against Israel employ such rhetoric as part of their campaign of economic warfare against the Jewish state. Such efforts seek to destroy the Jewish state through international pressure, undermining Israel to the point that it effectively ceases to survive as we have come to recognize it. Think about the implications for Israeli Jews, who live in a region in which most governments have shown indifference to if not support for slaughtering Jews. Moreover, now that the Jewish people have Israel and are not prepared to surrender it after 2,000 years of exile and persecution, the only way to replace Israel with Palestine or whatever else Omar and her allies envision, is by forcibly taking it. That would mean killing many Jews. Those who do not realize this reality cannot plead ignorance and absolve themselves.

Imagine if someone demonized and sought to de-legitimize another country – say, Ireland – with the same obsessive hatred that Omar shows Israel. Would they not be bigoted against the Irish? Of course they would.

But no one targets Ireland, or any other country, like so many target Israel. And here we get to the bigger point. Anti-Semitism, to paraphrase the eminent historian Bernard Lewis, has two special features that make it a distinct form of bigotry: Jews are assigned restrictive, disadvantageous double standards, and more importantly, a cosmic, satanic evil is attributed to them unlike anything else in this world. What do these criteria look like today? Treating Israel differently than all other countries and accusing it of being a nefarious puppet master controlling world events – maybe even hypnotizing the world.

Separating anti-Semitism from criticism of Israeli policy is not that hard. As with pornography, "I know it when I see it."

In today's world, where hatred and persecution based on race and religion are supposed to be no longer tolerated, anti-Semitism is based primarily on the Jewish people's nation-state. Anti-Zionism, or opposition to Israel's continued existence as a Jewish state, is the chief medium through which anti-Semites push their agenda. Those who may not have a personal animus toward Jews at large – like Omar (one certainly hopes) – but who support the BDS movement and other efforts to destroy the Zionist project – again, like Omar – are complicit in anti-Semitism. As nefarious and troubling as her comments peddling anti-Semitic canards are, her efforts to isolate, hurt, and ultimately destroy the world's only Jewish state pose a much greater threat. Those who want to fight anti-Semitism need to fight the policies toward Israel that Omar and like-minded progressives support. In other words, those who support such policies, those warriors for social justice, are part of the problem.

This article originally appeared in the Washington Free Beacon.

Aaron Kliegman is the news editor of the Washington Free Beacon. Prior to joining the Free Beacon, Aaron worked as a research associate at the Center for Security Policy, a national security think tank, and as the deputy field director on Micah Edmond's campaign for U.S. Congress. In December 2016, he received his master's degree from Johns Hopkins University’s Global Security Studies Program in Washington, D.C., with a concentration in strategic studies. He graduated from Washington and Lee University in 2014 and lives in Leesburg, Virginia. His Twitter handle is @Aaron_Kliegman. He can be reached at kliegman@freebeacon.com .

It Takes a Virus

The Spy Who's Locked Into the Cold
Why the Mezuzah is Placed on a Slant
Faith: the Axis Upon Which the Wheel of Science Turns
Love - Not Just About Chemicals Anymore!
Comments
MOST POPULAR IN Current Issues
Our privacy policy