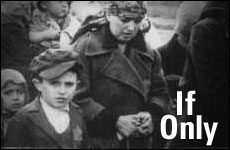 On Tisha B'Av I can feel the weight of thousands of years of “if onlys.”

For the past few weeks I have been walking around in a daze. The terrible tragedy of Leiby Kletzky’s death feels like a constant loss wherever I turn. Last Shabbos a neighbor’s nine-year-old boy came to pick up his little sister from our house. And he looked exactly like the picture of Leiby. I felt tears spring suddenly to my eyes. Not on Shabbos, I warned myself. Do not cry on Shabbos in front of all of your children while you are serving dessert. But I felt like I was choking, like my heart was in my throat. Like I could feel somehow another mother’s heart shattering across the ocean. And I couldn’t stop thinking about it.

I don't know why. Usually it takes me a day or two to digest an awful story in the news. Sometimes it only takes me an hour, or just a few minutes. But these past few weeks have been different for some reason. Maybe because I have children that are around Leiby’s age. Maybe because I worry when my children are even a minute late, and I can so readily feel the agony of a mother whose child will never come home.

But what is taking my breath away lately is how the summer sun can still shine in the shadow of such loss. I cannot comprehend it. How can the sky be such a startling shade of blue on a morning like this? How can the branches of the olive tree reach so majestically upwards, cradling tiny, colorful birds who continue to sing as if no one is crying? As if a nation’s heart isn’t broken? As if a child has not just disappeared forever? How could the world just continue this way with its stunning sunsets and dawns full of hope?

I wanted the sky to turn black, for a storm to surround us for just a moment so that the loss would be mirrored back to us. How could we all just go on?

And then I got stuck in the "if onlys." It was a futile attempt to try to turn back time. If only Leiby wouldn't have gone to camp that day. If only he wouldn't have had a dentist appointment. If only he had asked someone else for directions. If only someone would have found a way to rescue him. If only we could have somehow heard him before all was lost. If only his death hadn't been so gruesome…

Run! Run! I wanted to scream at the photos. Why, oh why, didn't you run?

I started thinking like this when I visited Yad Veshem too. I looked at the photos of "life before" the destruction of European Jewry, and I was shocked by how normal life looked in those photos. The routines of work and shopping and raising children. The way those streets and those towns were so deeply embedded in our people like our own homes. The beloved shuls, the holy leaders, the way no one could believe that the hard times wouldn't pass.

And I stood staring into one of the black and white photos when suddenly it hit me. That young mother looked just like me! Different clothes, different background. But there was something in her eyes that I know. The smile that rose from within her as she held her children's hands in a marketplace in a time and place so very far away but yet so close to me somehow. What happened to her? I wondered, and the "if onlys" began. If only they all would have left as soon as the warnings of danger began. If only they knew how terrible the future would be. Run! Run! I wanted to scream at the photos. Why, oh why, didn't you run?

On Tisha B'Av the depth and the pain of all our losses fill the very air that we breathe.

Tisha B'Av is the day when the birds of Jerusalem do not sing at dawn. The sky is not cloudy but it looks like it is on the edge of weeping, as if light itself is too much to carry. On Tisha B'Av the depth and the pain of all our losses fill the very air that we breathe. I can feel the weight of thousands of years of “if onlys.” If only we wouldn’t have cried for no reason in the desert. If only we would have done teshuva when the first Temple, in all its untainted holiness, was still standing. If only we had learned our lesson and become who we were supposed to be when the Second Temple was in our midst. If only we could have it all back.

The Sages tell us that there hasn’t been a true blue sky in Jerusalem since the Temple was destroyed. We don’t even know what we are missing. That is how far we are. Everything truly beautiful we have lost. Our center, our place where we could come close to God is gone. We wonder where and how we will find comfort when loss follows loss like the relentless waves of the ocean, pulling us under. Until we can no longer breathe, until we are fighting for air.

Until we are somehow pulled towards the one remaining Wall of His broken, empty Palace. Until we can all stand before that Wall and wonder how we can go on when a Father cannot find His children. When there is no longer a Home to bring them to.

If only we could really cry today. We are waiting by the door, knocking with the last of our prayers. If only You could hear the cries of those who don’t know how to cry. Please let us in. We are Your children, and we want to come home. If only it could be today.