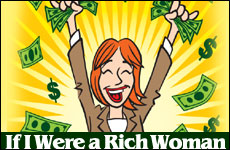 I write for a living. In other words, I ain’t rich.

Some years ago, we made a truly horrific mistake. We moved to the best area and into the worst house to be in walking distance of our son’s school. Yes, there were other choices, but we were taken in by the “Location! Location! Location!” credo, which, to Mrs. Plotkin of Millennium 3 Reality, was an 614th Commandment, falling somewhere between loshon hara and not embarrassing others. (Embarrassing ourselves, however, was another matter.)

So we bought “location” and a relic that was no doubt the original set for the diner scene in Bus Stop. In rotten neighborhoods these are called fixer-uppers. In good neighborhoods, they’re called “carriage houses.” (Much like the distinction between nuts and eccentric.) In fairness, the living room was huge.

According to the original blueprints written in something resembling hieroglyphics, the living room must’ve been added on later -- when the “people” got taller. But the rest resembled a railroad flat, flanking the “real” houses with actual rooms.

I first knew there was trouble when my son wondered why I didn’t wear diamonds to open school night “like all the other mommies,” or fetch him in a Lamborghini. He wasn’t spoiled, merely observant. Even a kid could see the difference between a Donna Karan blazer and a sweatshirt that read, “How can I Control My Life if I Can’t Control My Hair?”

While being a minnow in Lake Superior is no shame, in the words of Tevye, it’s no great honor either.

My reply? “I’m a writer.” Boom! After all, in New York City, virtually all of our “creative” friends, regardless of fame, reveled in “shabby chic.” “Creatives” don’t have to be rich “outside.” We have inner wealth! We deal in ideas, values, quirk! Yeah, that’s the mantra. And for years I got away with it.

But, while being a minnow in Lake Superior is no shame, in the words of Tevye, it’s no great honor either.

Finally, my son, realizing our views were markedly different from our neighbors, asked me, when, in my opinion, you were “rich” – on the “outside?”

20 Ways you know you’re really rich (on the outside)

True, we should be turning back to more spiritual values, especially in this economy. Yet, far too many have taken our cues from the media, and the “reality TV” people, where “rich” is nothing short of a sailboat the size of Lake Mead, a wardrobe by Versace and a 25,000 square foot “family-media room” (for a family that hasn’t spoken to each other since their therapist told them to take a “time out” in 1983.)

But, knowing human nature, no doubt some fool would soon move in and put up a bigger something in ice. And then, the neighbor on the left would carve a little something in his ice, prompting the one down the street to hire a sculptor to make a small but tasteful statue, leading to the guy around the corner erecting a Georgian igloo with Waterford windows, which would ...

See what I mean?

Fiddler on the Roof: New and Improved?

Proof Jews Are Inventive
Should I Break Up, Get Engaged or Keep Dating?
Time Is Your Precious Commodity
A Constant World in Flux
Comments
MOST POPULAR IN Jewlarious
Our privacy policy