I Will Never Quit 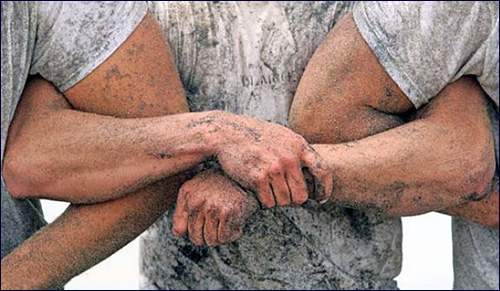 Living with the Navy Seals code.

“I will never quit. I persevere and thrive on adversity. My Nation expects me to physically harder and mentally stronger than my enemies. If knocked down, I will get back up, every time. I will draw on every remaining ounce of strength to protect my teammates and to accomplish our mission. I am never out of the fight.”

Marcus Luttrell cites this code of the Navy Seals in the prologue to his book, Lone Survivor. I didn’t read the battle details from which he was the sole survivor; what I read was the description of the grueling training process. We can’t even begin to imagine the demands made on these young men, both physically and mentally. Neither can they.

And that is part of the point. They don’t realize how much they are capable of. Only this rigorous (that’s actually too mild a word) training gives them a glimpse into their potential, into their strength and determination.

In succeeding, despite their exhaustion, despite being pushed seemingly beyond their limits, they are given a glimpse into their real power, into the real possibility inherent inside them. This is a gift.

They are indoctrinated with the mantra (and they internalize it on the deepest level) that they will never quit, no matter what. (And the “what” can be pretty brutal.)

They are motivated to succeed and quitting is not an option. It’s not an internal debate; they just keep pushing.

Most of us can’t even imagine what they go through. We get winded from climbing too many stairs. We give up on projects at the first sign of an obstacle. We don’t have the grit or determination and we don’t understand our own potential. We can learn that from the Navy Seals.

But I think we can learn something deeper as well. Most of our tests aren’t physical. We’re rarely asked to do 80 push-ups, then dive into freezing cold water to retrieve keys from the bottom of the pool, then run two miles, then, then, then… Our tests are emotional, psychological, spiritual.

And that is where the Seals are the most successful. Even though each successful recruit has undertaken a punishing physical regimen, his success is due less to his physical prowess and more to his mental state. He has told himself that he will never quit.

That is what we need to tell ourselves when life hands us challenges, when we get discouraged, when we want to give up. I will never quit. I have the inner strength necessary to survive this challenge, to even come out stronger in the end.

Through the rope tests, and pool tests, and freezing cold showers and races, the Seals discover what they are truly made of. Likewise with our forefather Abraham. He had ten tests, not of a physical nature but of a spiritual one. They enabled him to test his spiritual mettle, to discover what his priorities were, to harness his energy and determination to serve the Almighty. He emerged a more substantial human being, whose trust in the Almighty was deepened and actualized through his trials.

Very few of us are or ever will be Navy Seals. None of us are Abraham. But both of them teach us about our own latent potential. We have the ability to be just as determined, just as motivated, to fight to the finish. We need to take that power and use it to develop our relationship with the Almighty and with the Jewish people. Yes, we will have challenges along the way – some of them really rough and painful ones. But I like to think I can be like a Seal. I won’t allow the challenges to break me. I will use them to grow stronger. Like the Seals, I won’t give up. I will stay in the fight. I will draw on my strength to work on my relationship with the Almighty and with the Jewish people, to grow and to be better. It’s not the mountains of Afghanistan but it’s my battlefield.

Sometimes I think it’s too much. I want to say to the Almighty, “I’m not who you think I am. This test is too hard for me.” But then I read about the Navy Seals. If they can bring all their resources to bear to serve their country under the most trying and adverse circumstances, I can certainly do the same to serve my Creator.

Why You Have What I Want

I'll Love You If…

The Business of Marriage

Living Amidst the Chaos