Hurricanes and Our Rosh Hashanah Prayers 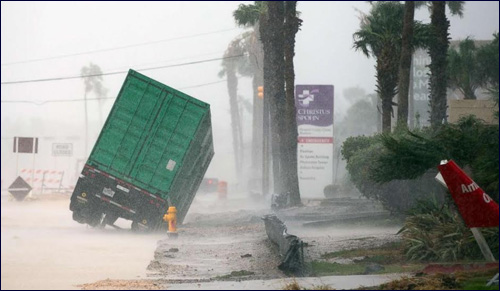 Even blessings can become misfortunes when they appear in the form of excess.

The scenes from Houston of raging floods threatening lives and destroying property are indelibly imprinted in our minds, cruel reminders of the power of uncontrolled and uncontrollable torrents of water that brought about devastation. The financials costs are astronomical; far worse are the human and emotional suffering of survivors who lost literally everything – their possessions, their memories, and for some even their loved ones.

Now Hurricane Irma threatens to wreak havoc and destruction, and has already caused the death of at least 25 people.

It is interesting to note that the disaster of Hurricane Harvey came about because of an excess of water.

Water is the key to life. Water is a blessing for which we beseech God in almost all of our prayers. It is a gift without which we simply cannot survive. Moses miraculously brought forth water from a rock. The spiritual giants of our people demonstrated their close kinship with God by being able to have the Almighty answer affirmatively when they pleaded for much needed rain.

Yet the same water of blessing and life can turn into curse and become agent of death.

The same water of blessing and life can turn into curse and become agent of death.

How is that possible?

Because even blessings can become misfortunes when they appear in the form of excess.

Hurricanes, floods, storms and overwhelming deluges demonstrate the danger of “too much” – the tragic recognition that no matter how important something may be for our happiness and even our survival, an unexpected surfeit may be more harmful even than its absence.

The key to success, the old adage goes, is success. Perhaps we ought to add another line: and the key to failure is excess.

What do we want more than anything else? For many people the answer is simply one word. Oliver Stone’s movie Wall Street: Money Never Sleeps, captured what motivates those who are ready to destroy their friends and their families in pursuit of unlimited wealth. In a meeting between the young Jake (Shia LaBeouf) and the megalomaniac, Bretton James (Josh Brolin), Jake puts the question to Bretton who has already caused the suicide of a competitor and the destruction of another firm with false rumors: "So what is your number?”

When Bretton doesn't understand, Jake explains that everyone has a really far out number that represents total success, the ability to get out of the race knowing that he is now the victor. “So what's your number,” Jake repeats.

Bretton considers and after a few moments of silence responds with that one word: "More.”

The Torah tells us the moving moment when after years of separation the twin brothers Jacob and Esau finally meet. At this stage of their lives they have taken divergent paths on their respective journeys. Their values are now totally dissimilar. The difference in their spiritual outlooks is exemplified by one short verbal exchange. When Esau summarizes his life he tells Jacob “I have much.” Jacob’s statement comes from a significantly different perspective: “God has dealt graciously with me – and I have everything.”

“Much” or “everything” are two ways of looking at the world. “Much” will forever remain dissatisfied. “Much” may have fulfilled his need but can never satisfy his greed. “Much” wants blessings unlimited – without understanding that limits for blessings are in themselves blessings.

The desire for more is our contemporary idol. Jacob grasped the danger of excess. What God granted him was the amount of blessing he needed. That’s why he could say “and I have all.”

King Solomon, the wisest of all men, wrote, “Give me neither poverty nor great wealth” (Proverbs 30:8). Extremes of either one of them are as destructive as their total absence. The impoverished suffer from need; the super wealthy are sickened by greed. Too much is as bad for our emotional health as too little is for our physical well-being.

Kurt Vonnegut and novelist Joseph Heller were once at a party hosted by a billionaire hedge-fund manager. Vonnegut pointed out that their wealthy host made more money in one day than Heller ever made from his world-famous novel Catch-22.

Heller responded, “Yes, but I have something he will never have: enough.”

Our prayers need to embrace this remarkable insight. We live in a time blessed by great material prosperity. It is something that generations past longed to be able to pass on to their children. But we often don’t consider the potential minefield of bad behavior that lies in wait for our youth if they aren’t taught to balance their good fortune with a sense of self-discipline and responsibility.

In our personal quest for wealth we need to make certain that we do not allow it to become synonymous with stealth – stealing our sense of morality, our personal dignity, and the preciousness of our values above all the additional zeros in our bank accounts.

Blessings, just like heavenly rain, are good – except if, like hurricanes, they come beyond our capacity to absorb and overwhelm us with their power.

Let our hope for the New Year be that our prayers are met with the divine favor of moderation so that by having enough we can gratefully exclaim with Jacob our thanks to the Almighty for allowing us “to have it all.”

Just Listen, Will Ya?
Lokshen Noodle Kugel Recipe
G-d Time
Shavuot is The Holiday of Cheesecake and Blintzes
Comments