How to Praise Your Children 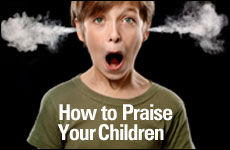 Jonah came home from nursery school with his first drawing, a red “abstract” house. Not only did mom hang it, she eagerly awaited each of his masterpieces, morphing into Mama Chagall. “What talent!” she exclaimed, as she emailed scanned copies of his masterpieces to family, friends, neighbors. After spending a small fortune on art supplies and hovering over the “creating” Jonah, imagine Mama’s horror when one day her “Chagallala” gave up his “career” at age four and a half. Not only did Jonah refuse to draw again, but he ate five (non-toxic) crayons – the red ones.

Reba won a beautiful baby contest. She was adorable. Family, friends, even strangers, told her, “You’re the most gorgeous child I’ve ever seen!” More ribbons followed. Until she entered the awkward tweenies when her curls went wayward, and she’d retained that “baby bloat.” In middle-school, Reba bombed with the “cool” group, and spent most of her time in her room, depressed, as she obsessed in front of the mirror over every flaw.

During a car trip, little David offered to share a candy bar with his younger sister, Eva, who was whining. This backseat gesture had been previously unknown in David’s World. “You’re the best little brother ever!” exclaimed his excited parents at their son’s sudden show of generosity. That is, until David grabbed Eva’s Barbie and untwisted her head.

After all that praise, where's the happy self-confidence? “Why is my child turning into Brat Simpson?” these parents wonder.

One night, in a burst of unusual energy, you take over your wife’s usual chores. Thrilled, she says, “You’re the greatest husband in the world!” Such praise! Yes, I am one terrific husband! you think, puffing up. And then: Wait. Does she expect me to be that “great” every single time?!

What do you do tomorrow? Be honest. You probably cut back a little – or a lot.

Now, take little Jonah, “the painter.” Even at age four he knew his work was just “okay” but so what? He enjoyed drawing his red painting – that is until he was “promoted” in praise to Chagallala. So he cut back. Under the spotlight of all that undeserved and unwanted pressure, he ate the crayons.

Self esteem plummets under the pendulous weight of unhelpful praise.

Onto our “beauty” Reba. All that praise on the altar of one specific God-given superficial “gift” left her clueless about her true measure, her real character-driven accomplishments. She, too, not only opted out, she hid in shame and depression.

As for “best brother David” – five minutes earlier he had secretly wished his parents left his whining little sis at the last gas station. Some ‘best brother’ I am, he thinks guiltily. I only gave her the candy to shut her up. Then he performs a lobotomy on her Barbie to prove your error.

Rather than raising esteem, it plummets under the pendulous weight of unhelpful praise. The child grows up with an unrealistic image that no one can live up to, which may drive our little one to give up, or become an empty-praise junkie.

The positive power of praise is well documented. As children grow, they need emotional feedback to mirror who they are. Praise is one way they learn about themselves. When they learn honest, specific positives, they develop confidence and esteem.

But lavishing general, over-reaching praise often has the opposite effect, setting the child up for unrealistic and fraudulent expectations. Telling a child: “You’re a wonderful, son,” “You’re the most honest person I know,” “You’re Mommy’s little angel,” “It’s always such a pleasure to be around you,” “You’re one great artist, writer, [fill in the blanks]. “You’re so smart, there’s nothing you can’t do,” they all sound like confidence boosters, but in fact, they land like “dares.”

Praise is a lot like medicine. The right dose at the right time.

These dares set up impossible standards. Parents may hope it’s true but our children know it’s not. After all, who could live up to such overwhelming kudos?

Praise is a lot like medicine. The right amount and type at the right time can restore and contribute to our child’s well-being. But too much of the wrong kind or given at the wrong time and we’ve got one sick puppy for whom the praise:

So how can we praise without “punishing?”

“Thanks for helping me clean the basement. It looks like new,” or “You followed the recipe, and we all really enjoyed your cookies,” instead of "What a terrific cleaner or cook you are” telegraphs our children did a fine job, without raising anxiety by expecting them to be Bob Vila or Martha Stewart. Letting children know what they’re actually achieving offers a realistic emotional mirror. The message they hear? “My work really paid off! I did something new, and I can learn, listen, follow directions. It was fun, my family appreciated me. I feel sooo grown up and can’t wait to do more.”

Proportion in any excellent recipe is critical. Too much sweet (praise) is as unhealthy as too much salt (criticism). Our child cleans her room well. It’s her job and her challenge. She deserves the simple, honest, recognition, not a marching band. We all want our children to own their real accomplishments, and not become “sugar junkies.”

#3: Praise in the here and now without prophesizing or readying your mantel for a Nobel Prize

In the Siddur we say each morning, "A person must always acknowledge the truth and speak truth in his heart.” Over-praising is a fundamental “untruth” and, despite well-intentioned praise, our children know they’re not deserving of all that glory. Not only do they feel the stress, they start to doubt themselves, and us. Ironically, hyper-praise can cause our children to either shut down, or become competitive at all costs. On the other hand, specific, proportional praise encourages children to believe in the value of a job well done.

#4: Helpful praise allows the child to infer the truth about himself and his character

Saying, “I really appreciate you telling me I gave you a five dollar bill instead of a one,” beats, “You’re always so honest!” by letting children get the idea – for themselves – that honesty is a positive quality, one they can and should continue as an ethical standard that is important, noted, and respected.

#5: Praise a good attempt, as well as accomplishment.

“Wow! An 85 in math. That was a tough test. And I know you were worried about it. This grade shows you really put a lot into it and it paid off!” tells the child effort and perseverance are more important than instant success.

Useful praise supports positive reality, acts as an accurate emotional mirror, and lets the child develop self-knowledge and ethics. With these character traits, children can then grow and mature with true confidence – confidence they’ve earned, and confidence they can trust.

4 Parenting Skills You Can’t Live Without

PODCAST: Listening to Our Kids, Teens, and Everyone Else

In the Blink of an Eye
Why Are The Prayers Of Yom Kipur So Repetetive?
Ha'azinu 5783: A Time for Unity!
Twisted Thinking
Comments