How Smart Is That? 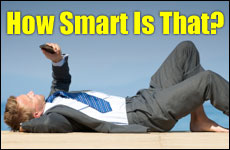 It’s time to outsmart our smartphones.

“Excuse me!” I said -- for the third time -- to the guy yapping on his phone. This talker was a big lug, taking up so much real estate by the entrance of the small café that he effectively blocked me from getting out. From my one-sided listening perspective, he seemed utterly absorbed in a singularly trivial conversation, oblivious to the gridlock he had created. I didn’t want to have to ask to leave by the service kitchen, so I began my “excuse me!” chorus. Eventually, reality dawned. “Oh,” he said, at long last stepping out of the way, the phone still tightly in his grip.

As I whooshed past him, I had an epiphany:  Our “smartphones” have outsmarted us! They’ve made us insensible to our surroundings, convinced us that we are such machars that we dare not even take a walk around the block without them, lest we miss a phone call, text message, or invitation to a video chat. Just when did we lose that rugged, independent spirit that allowed us to live unencumbered by these Androids, BlackBerrys, and iPhones? Now, just about everyone who lives outside the remotest rainforests of Madagascar carries not only a smartphone, but an insatiable appetite for apps, too. We’ve all been suckered by the old tag line from American Express: Don’t leave home without it!  You know things are out of control when even in public restrooms, people no longer just answer nature’s call. If their phone rings, even in the most private of moments, they answer that, too. How smart is that?

About a year ago, a few drops of water spilled on my simple, old-fashioned cell phone, instantly killing it. I then had the wacky idea that I would try to function in the 21st century without it, just to prove that I was not addicted to mobile communications devices. My experiment was a total bust. Only two hours into cell phone-free living, I felt unsettled. At the supermarket, I felt isolated, possibly even friendless. I had nothing to focus on except checking for weekly specials and expiration dates on yogurt. I realized that this wireless condition provided an excellent opportunity to think, but when I tried to access my thoughts in my brain’s hard drive, I received an error message. Therefore, I was reduced to eavesdropping on the conversations of other shoppers as they gabbed on their phones. This taught me an important lesson, namely, that if you suspect you have gallstones, you had better get to the ER, stat. I felt myself reflexively reaching into my purse at frequent intervals to check for missed calls. Man, I was in worse shape than I thought.

During those days of living like it was the Dark Ages of the early 1990s, there was one bright spot.  One of my kids who lives on the other side of the country took the extreme measure of calling the house land line to reach me. “I’ve been texting you for days and you didn’t answer!” he complained. He actually sounded worried about me. Like any other Jewish mother in similar circumstances, I kvelled.

After laboring on my cell phone-free experiment for six days, on the seventh day I rested. I just couldn’t take the stress anymore. Without a cell phone, I was stymied from living with my attention divided in a dozen directions, and it was too late to return to a more primitive way of living. Within hours of surrendering, I was fitted up with a new smartphone, with so many bewildering features that I had no idea what to do with them. But at least I felt human again.

I’ve been armed and dangerous ever since. I can text and talk at the same time, scroll through email while making dinner, and if the dog suddenly does something funny, I can interrupt my daughter telling me about her day to record it on my camera. My smartphone has made me not only a multitasking maniac, but rude, too. How smart is that?

Now, I’m not claiming that these smartphone manufacturers are anti-Semitic or anything, but I’m convinced that these devices are bad for the Jews. The reason is simple. We Jews tend to be worriers as it is, right? And with people texting each other every fifteen minutes just to say, “I’m at the store. Do we need bananas?” or “On the train. Home in about 20 minutes,” we only reinforce our already overworked worry glands. What happens when you forget to charge your phone and cannot text your spouse/parent/child/significant other about your location every half-hour? Jewish mothers worldwide will start searching for their loved ones on their smartphone’s Google earth feature, which might take hours.  We Jews need to ratchet down this business of always checking in. It’s bad for our digestion.

Fortunately, there are ways we can outsmart our smartphones. First, we get to turn them off on Shabbat, ensuring we have a 25-hour vacation from thrumming, ringing, chirruping, and ring tones, no matter how charming. Second, we can reclaim some of our rugged individualism and learn to tame the BlackBerry beast and Android addiction by tuning in to Rabbi Noach Weinberg’s (z’tzl) 48 Ways of Wisdom. If anyone can help us learn to become masters of our smartphones, instead of their slaves, it’s Reb Noach. As for me, I’m starting with #9 – “Total Concentration” and #42 – “Peace of Mind.”

But first, I’m going to turn off my phone for a while. Smart, no?

The Yiddish Dictionary of Fools
Don’t Believe in Other Gods Versus God is One
Seeing Without Eyes
Why Shouldn’t We Eat Whatever We Want?
Comments
MOST POPULAR IN Jewlarious
Our privacy policy
Aish.com Is Looking for Great Writers