How to Talk About Israel’s African-Migrant Crisis 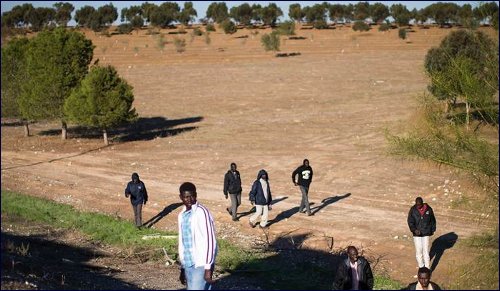 Switzerland, too, is toughening its stance on Eritreans—and no one is calling it a Gestapo state.

How did Israel become a place of no refuge?

That was the question posed by Rabbi Susan Silverman in an op-ed in The New York Times earlier this week, as she addressed the Israeli government’s decision to deport thousands of African migrants. Calling the decision a “deeply anti-Jewish policy,” Silverman dubbed the effort to oppose the deportation “the Anne Frank movement,” making it abundantly clear that, to her mind, the issue was morally stark, pitting helpless victims against the contemporary reincarnation of Hitler’s death squads.

This is a serious charge. Before we embrace it, we would all do well to take a deep breath and turn to facts before rhetoric. The problem at hand is real, and it deserves a real discussion.

Eleven years ago, in January 2007, the Knesset’s Internal Affairs and Environment Committee held a meeting to discuss how to respond to a small group of migrants from Sudan who had entered the country illegally. “We, the State of Israel, somehow we really lost our minds,” said Avshalom Vilan of the left-leaning Meretz party. “There are currently 288 asylum-seekers from Sudan who have successfully escaped from hell. We’re talking about 300 people who came from a country where a genocide is claiming millions of lives. We’re talking about 288 people, and they’re trying to scare us that tomorrow it’ll become a stream of thousands and tens of thousands.”

As of October of last year, there are now 38,000 documented migrants living in Israel, the vast majority of whom are Eritrean and Sudanese.

Except that is precisely what happened: As of October of last year, there are now 38,000 documented migrants living in Israel, the vast majority of whom are Eritrean and Sudanese. The Hebrew word for this group is mistanenim, or infiltrators, and it consists solely of individuals who have crossed the Egyptian border into Israel without permits. Migrants are eligible to file for asylum, and their status changes to asylum-seekers as soon as their application is received. In addition, there are 74,000 people residing in Israel who had entered the country as tourists and have overstayed their visas, as well as 18,555 foreign workers without valid permits, but they’re not the ones making headlines.

Who, then, are these migrants? According to a recent report by a coalition of Israeli human-rights groups who are strongly opposed to the deportation, between 2013 and 2017, 13,764 migrants have filed for asylum, with only 10 requests approved by the courts. This may have to do with the fact that Eritrea, for example, is not particularly punitive toward returnees who have fled it, many of whom simply wish to avoid the country’s lengthy, and mandatory, military service. A 2016 report by the European Asylum Support Office, a European Union agency, found that international representatives stationed in the Eritrean capital, Asmara, to monitor the returnees’ well-being “were unaware of any more recent examples of people being arrested on entering the country.” The report also conveyed the Eritrean government’s 2015 policy of offering clemency to the returnees, further supporting the Israeli courts’ reluctance to grant Eritreans the status reserved only for those threatened by severe prosecution back home. In their ruling, the judges in Jerusalem are similar to their colleagues in the European Court of Human Rights, which ruled last year that the expulsion of Eritrean asylum seekers from Switzerland would not breach the European Convention.

The overwhelming majority of those who arrived in Israel did so simply to find better work.

Rather than see the migrants as helpless refugees, then, the Israeli government, aided by a simple demographic calculation, ascertained that the overwhelming majority of those who arrived in Israel did so simply to find better work, which explains why among those alleging refugee status an overwhelming number are young single men. In 2014, the Institute for Zionist Strategies published a paper that found that of the 13,940 migrants who stole across the border into Israel in 2010, 11,961 were men; a year later, in 2011, male migrants counted for 11,567 of 13,686 overall arrivals.

Even if the migrants in question were indeed refugees, the United Nations’ 1951 Convention Relating to the Status of Refugees states that each country may handle refugees as it sees fit, as long as it doesn’t deport them to their countries of origin. Israel does no such thing: In an effort to find an acceptable solution, it negotiated with two African countries, Rwanda and Uganda, reportedly offering to pay them $5,000 for each migrant they absorb. Israel is also offering $3,500 to every migrant who agrees to leave of his own free will.

What happens to the migrants once they arrive in Rwanda and Uganda? To hear Israel’s NGOs and media tell it, deportation is akin to a death sentence. Late last month, for example, an El Al pilot named Shaul Betzer was applauded by some for taking to Facebook and posting that “there’s no way that I, as a pilot, will take part in flying refugees/asylum seekers on their way to a destination when their chances of surviving upon arrival to that country is almost zero.”

Again, the facts don’t mesh with the rhetoric here: Addressing an appeal by human-rights groups to cancel the deportation, Israeli judge Rachel Barkai of the Be’er Sheva District Court found that not a single deportee “has argued that he was arrested in the third-country destination [to which he was deported] … nor was it argued by anyone that staying in that country will expose them to any danger to their lives or their liberty.” The NGOs appealed to Israel’s supreme court and were again rebuked by the justices there for painting a patently false picture of the fate that awaits the migrants in Uganda and Rwanda. “After examining the evidence,” wrote former Supreme Court Chief Justice Miriam Naor in her verdict, “it is my opinion that the appellants did not succeed in proving that the [countries to which the migrants will be deported] are unsafe or that they are in any danger.” Naor also stressed that most migrants do not meet the criteria of asylum seekers, and reminded the appellants that most migrants never even bothered filing for asylum.

Complicating matters further is the fact that many of those deported will then leave again in the hope of making it to Europe or somewhere else where economic opportunities are plentiful. Some, for example, try for Italy and end up in Libya, a failed and perilous state where scores of the migrants were arrested and a number killed by armed militias. To argue, however, that this tragedy is any way the responsibility of the Israeli government is absurd.

The Sudanese and Eritrean migrants struggling to stay in Israel aren’t Anne Frank, and the Israeli government isn’t the Gestapo.

The Sudanese and Eritrean migrants struggling to stay in Israel aren’t Anne Frank, and the Israeli government isn’t the Gestapo. Thinking in these terms is morally unserious, intellectually dishonest, and politically unwise. And they prevent us from carefully and effectively addressing the real question: Should the migrants be allowed to stay?

Take the sound and the fury out of the picture, and you’ll find good and convincing arguments on both sides. It’s perfectly fine to argue that Israel, a Jewish state founded in the shadow of unprecedented persecution, should be sensitive to all who wish to make a better life for themselves, and therefore loosen its immigration policy to absorb as many newcomers as it can without making spurious arguments and claiming that they’re all in imminent mortal danger. That said, anyone making this argument should be prepared to explain precisely how Israel ought to welcome torrents of newcomers. The last decade was proof that, in the absence of clear guidelines, Israel’s free society and robust economy will attract an exponentially growing number of African migrants. Even if you believe the freedom to pick up and move anywhere you like to be a universal human right—a problematic proposition—you’d still have to explain just how Israel is supposed to take in so many newcomers without jeopardizing its ability to sustain its citizens first, losing its inherently Jewish nature, or both.

This, of course, is a more jagged version of the very same conversation Americans are having when they talk about immigration. Israelis, so frequently the canaries in the global coal mine, would do well to lead the way by rejecting the temptation of empty outrage and engaging instead in a difficult and complicated conversation, the kind adults have when faced with inconvenient truths and imperfect choices. It’s time for us to talk.

The Murder of Zidan Saif

The American Interest
Were Adam and Eve Jewish?
How I Learned to Love the Multiverse
10 Big Jewish Inventions
Comments