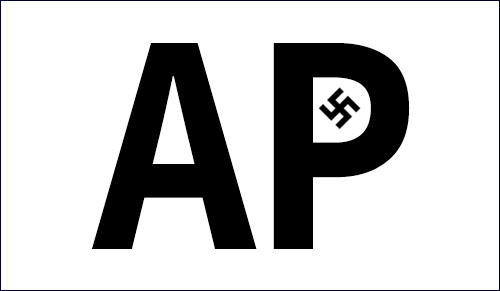 When the Nazis asked them to fire Jewish employees and hire only Aryans, the AP agreed.

The Associated Press (better-known as AP), one of the oldest and most reputable news agencies in the world, likes to describe itself as having the same motto as the US marines: First ones in, last ones out. And when it comes to reporting from Nazi Germany, AP was, indeed, the last one out.

Long after other media organizations were kicked out for refusing to comply with the demands of the Nazi regime, AP journalists and photographers went on covering the Nazi agenda and the Second World War from inside Germany. For their extraordinary journalistic achievements, the head of the Berlin Bureau, Louis P. Lochner, a German-American who came to Germany as a lifelong pacifist and then grew increasingly alarmed by the Nazi ideology, was awarded the Pulitzer prize in 1939.

Two years later, when the US entered the war, AP was forbidden to continue operating in Germany. The agency's American employees in Germany were then arrested and sent home five months later as a part of a prisoner exchange. This wasn't unusual. Other news agencies and newspaper correspondents were banned by Germany much earlier. The wonder is that AP was left alone for so long.

That agreement also benefited the Nazis and their propaganda machine.

The explanation for this puzzle was provided last year by a historian named Harriet Scharnberg. In an article published in the academic journal Studies in Contemporary History, Scharnberg claimed that AP was able to preserve its unique status due to a special agreement it had entered into with the Nazis. That agreement made it possible for AP to go on reporting from inside Germany, but it also benefited the Nazis and their propaganda machine.

Scharnberg found out that the AP allowed the Nazis to use their photographs in such anti-Semitic materials as the well-known SS brochure “Der Untermensch” (“The Sub-Human”). Additionally, the agency agreed to employ photographers that were affiliated with the Nazi party (Franz Roth, one of the four photographers employed by AP in Germany during that period, was actually a member of the SS propaganda division), and its representatives signed the infamous 'editor's law' which prohibited them from publishing any material that could 'weaken the Third Reich'.

AP also agreed to the Nazi demand that they would employ only Aryan people; six employees deemed Jews by the Nazis were let go as a consequence. That demand was faced by other media organizations as well - British-American agencies such as Keystone and Wide World Photos are two such examples; they resisted and paid the price.

Last year AP was celebrating its 170th anniversary. Needless to say, Scharnberg's revelations marred the celebration. Critics pointed out that the troubling history of AP brings more focus to their current handling of totalitarian regimes. For example, AP was the first Western organization to open a bureau in North Korea. Have its chiefs reached a secret agreement with Pyongyang, similar to the agreement reached in 1935 with Berlin?

Hoping to silence the critics, AP commissioned its own report of the agency behavior during WWII. This report, written by Larry Heinzerling, an adjunct assistant professor at the Columbia Graduate School of Journalism and retired AP deputy international editor, was released earlier this month. Predictably, it has absolved AP of the worst accusations.

“We recognize that AP should have done some things differently during this period, for example protesting when AP photos were exploited by the Nazis for propaganda within Germany and refusing to employ German photographers with active political affiliations and loyalties,” the report says. “However, suggestions that AP at any point sought to help the Nazis or their heinous cause are simply wrong".

But the important issue is not if anybody at AP had an interest in helping the Nazis. Nobody has ever claimed that. The point of Scharnberg's article was to show how the AP was ready to give up part of its journalistic integrity in order to retain its access.

The AP's own report also dwells on the role the agency played in exposing the Nazis' crimes to the world. This is doubtless true – but it is also only a part of the story. While reporting about the increasing anti-Semitism in Germany itself, the AP wasn't over-careful to draw attention to the fate of Jews in places occupied by the Nazis. When the German army occupied the city of Lviv (then in Poland, today in Ukraine) the AP didn't publish any reports or pictures describing the massacres of the Lviv Jews that were organized by the Nazis. Instead, the agency went along with the German wish to publish photos of the bodies of the people murdered by the previous occupiers of the city, the Red Army.

The AP report doesn't deny that the organization capitulated and fired its Jewish employees in 1935.

The AP report also doesn't deny that the organization capitulated and fired its Jewish employees in 1935. While expressing regrets over that decision, the report emphasizes that AP helped these people to find new jobs, and to eventually emigrate from Germany to the US. Obviously, it is good to know that these people survived and didn't have to suffer consequences for AP staying put while other agencies were pushed out. But it is hardly praiseworthy to say: 'we fired these people, but we didn't let them die'.

In a world where it has become increasingly difficult to know which news sources and media outlets to trust, this dark chapter in the history of the AP serves as an important reminder. Journalists do important work, but too often they prioritize a good story over anything else. Perhaps the AP reports from Germany told only the truth about Nazi Germany – but it seems unlikely that these reports could ever have given the whole truth. It also seems unlikely, considering the circumstances, that the Nazis would have let the AP become the last Western news agency in Berlin if they hadn't benefited from the situation.