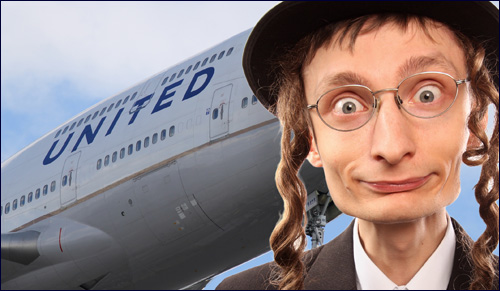 United Airlines is in trouble. As everyone knows by now a video went viral showing shocking mistreatment of one of its passengers. David Dao, 69, suffered a concussion, broken nose and damaged sinuses and lost two front teeth when he was dragged off a flight to make room for United personnel. Social media outrage, a global uproar, rained down on the Chicago-based airline after videos emerged of the night's violent confrontation at Chicago's O'Hare Airport. Three Chicago Aviation police officers have been placed on leave. The airline offered a string of sometimes awkward apologies and issued a refund for everyone on the flight. That was small change to United — the company suffered a one-day stock drop of $250 million. In addition, Dao will likely get millions from the forthcoming lawsuit.

This most likely would never have happened if Jews had been in control of the situation. Rather than selecting passengers at random to be manhandled and hauled off the plane by police, Jews would have made the obvious, common sense decision to avert a crisis: handed the P.A microphone to a Jewish Bubbie (grandmother) and allowed her to address the cabin for over two hours about her adorable grandchildren, her various physical ailments, her disappointments in her life, her disappointments in her friends and neighbors, detailed descriptions of her home décor and the décor she’d like to purchase if she could afford it, her retirement plans, her retirement investments, and her extensive argument about how Ed Asner is under-rated as an actor. That way, once offered the opportunity, passengers would be climbing over each other in an attempt to be the first off the plane for a future flight.

All of which got me thinking about how many crises might have been averted simply by having Jews manage the situation. Here are three more crises, along with examples of Jewish coping skills and solutions.

From 1958 to 1962, China experienced a monumental famine that killed at least 45 million people. There are generally two causes blamed for it: natural disasters and the communist policies of Mao Zedong. Mao intended to turn China from an agrarian economy into a modern, urbanized, industrial giant on par with the U. S. But forcing his Great Leap Forward on the Chinese countryside led to nationwide crop shortages. Then the Yellow River flooded in 1959, drowning or starving 2 million. The next year, 60% of China’s farmland received no rain at all. The famine only ended when the weather improved in 1962. 5% of China starved to death, drowned, or were murdered.

If we travelled back in time and put Jews in charge, they might have been inspired by Howard Schultz, the Jewish Executive Chairman of Starbucks. Starbucks has a coffee shop on practically every corner in America. Had there been a Jewish deli on every corner in China, the famine would have been averted and the Chinese would have enjoyed some tasty foreign food. Hey, we Jews go out for Chinese food every Christmas. It’s only fair!

The Black Death is thought to have originated in the arid plains of Central Asia, where it then travelled along the Silk Road, reaching Crimea by 1346. From there, it was most likely carried by Oriental rat fleas living on the black rats that were regular passengers on merchant ships. Spreading throughout the Mediterranean and Europe, the Black Death is estimated to have killed 30 – 60% of Europe's total population. In total, the plague may have reduced the world population from an estimated 450 million down to 350 – 375 million in the 14th century. The world population as a whole did not recover to pre-plague levels until the 17th century. The plague recurred occasionally in Europe until the 19th century.

The Jewish solution? Isn’t it obvious? A Jewish exorcism, of course. And you want a truly pious rabbi to conduct the ceremony. Failing that – Gilbert Gottfried. Next, the exorcist would ritually purify himself, either according to traditional Jewish practice, or by special means, such as anointing himself with water or Manishewitz wine.

The Jewish exorcist (or, Jexorcist) then uses the power of the demonic spirit’s own name to “overpower” it, by round after round of scripted ritual actions involving threats and rebukes, getting more intense and invasive with each effort, throwing in something impressive here and there from the Psalms or Kabbalah. As he final blow, the Jexorcist would scream how disappointed the demonic spirit’s mother would be in him if she knew he was causing the Black Death. (Though some say this is hitting below the belt.)

The Sinking of The Titanic

The sinking of the RMS Titanic occurred on the night of 14 April through to the morning of 15 April 1912 in the North Atlantic Ocean, four days into the ship's maiden voyage from Southampton to New York City. The largest passenger liner in service at the time, Titanic had an estimated 2,224 people on board when she struck an iceberg on Sunday, 14 April 1912. Her sinking two hours and forty minutes later resulted in the deaths of more than 1,500 people, which made it one of the deadliest peacetime maritime disasters in history.

How would Jews have handled this disaster? By not boarding The Titanic in the first place! That’s how smart and prescient we Jews are! As witness this passage from the March 7th, 1912 diary of Hiram Leibowitz: “Today, I mentioned to momma that I was considering booking passage on The Titanic’s maiden voyage next month. She responded, “Hiram, bubbeleh, that’s not a good idea. The ship hasn’t been tested. It’s too big. It’ll be too cold. They’ll run out of food. There are pirates. You’ll be bored. You’ll be seasick. There’ll be storms. There are germs. The ship could crash or God forbid even sink! I beg you to give up this meshuga thought.” As did hundreds of British Jews, Hiram ended up listening to his mother and for the rest of his life was grateful to her for saving his life.