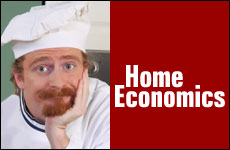 A recent survey shows that the average family spends about four days arguing every year. (Extra points if you can guess which days. I’m guessing they’re in April.) I can definitely believe that, although the reason I do is none of your business.

In college I lived with 5 other guys. We owned one pot. The consensus was that it was dairy.

But as my readers know, I occasionally like to use my column to resolve a lot of these arguments, at least on weeks when there’s nothing good in the news. The basic idea is that I can provide helpful insights because:

A. I am an objective, professional writer, and the truth is that most marital arguments, when looked at objectively, turn out to be pretty silly, and usually center around the topic of who started the argument. Also,

B. Since I am writing my opinions rather than saying them out loud, no one is going to interrupt me, so long as I can finish this column before my wife gets home.

1. What women will take from it is that they should tell their husbands everything that happened to them every day, including what their plans were, what they actually did, why they didn’t do what they’d planned to do, who they ran into, what those people’s plans were, why they didn’t do what they’d planned to do, and so on. But the truth is that a husband doesn’t really want to know every single thing, which is why he goes to work in the first place. So he’ll try to block out most of it, and keep an ear open for key words that involve either him or the car. And of course he’ll miss something, and his wife will have to repeat herself, and that will lead to a fight.

2. What men will take from this is that they should only tell their wives things that they absolutely need to know, so that there’s nothing for her to block out. And consequently, she will accuse him of not sharing his feelings, when the truth is that he really only has one feeling, and that is: Only tell her what she needs to know.

So I’ve come to the conclusion that most things that men and women fight about, including how much to communicate, can be boiled down to one thing: Men, in general, are more economical.

Take cooking, for example. I can cook an entire four-course meal, and in the end there will be maybe two pots in the sink, and, depending on my mood, a fork. Whereas my wife can decide to make herself a single omelet, and I will later come into the kitchen to find every bowl, pan, cup and spatula that we own, all piled up in the sink. I picked up a lot of my cooking skills from college, where I lived in an apartment with 5 other guys, and between the six of us, we had exactly one pot. (The general consensus was that it was dairy.) If we needed to stir something in the pot, we used a plastic fork from the cafeteria, and when the fork was sufficiently melted, the food was probably done, at which point we put the cover back on and strained out as much water as we could, using a yarmulke as an oven mitt. So yes, I’m pretty sure this is a man/woman thing.

I’ve noticed a similar thing when it comes to leftovers. When faced with leftovers, a woman will put it all together and whip up a casserole. Men don’t think in terms of casseroles. I have never, in all my years of hanging out with men, heard one say, “You know what I can sure go for right now? Casserole!” A man will eat casserole for one reason only, and that is to avoid an argument. If a man is faced with leftovers, he will make himself a sandwich. This is the ideal man food, because it doesn’t involve heating anything up, or taking out more pots, and he can eat it cold and with one hand. He doesn’t even need a plate.

But sometimes, being economical can actually get men in trouble. Let’s take the area of leaving the house. When a woman leaves the house, even to go to the supermarket, she will set off with a whole caravan of belongings in case, somehow, on the way there, she gets stuck on a desert island. Her pocketbook alone weighs more than most of her kids. But if she calls her husband to tell him to meet her there with the baby, the husband will get into the car with just that: the baby. Even if he’s meeting her at her parents’ house for an eight-day weekend, he will bring: the baby. No diapers, no change of clothes, and nothing for the baby to spit on. (“It’s okay, I have two undershirts.”)

But that’s part of being economical; men don’t like carrying a lot of stuff. That’s why we like having gadgets that do more than one thing, such as phones that take pictures and send text messages and store “to do” lists. (TO PACK: Socks, Undershirts, Baby.) The Swiss army knife, for example, was definitely invented by a guy whose wife asked him to set the table:

“There. Happy? Everyone gets one of these.”

But the key is to remember, before you yell at each other in increasingly higher tones until you’re having an argument that only dogs can hear (“What are they saying?” “They’re saying, “I’m not the one arguing, you’re the one arguing!””), that these traits are built into our very natures: Men hunt and women nest. Have you ever seen a bird build a nest? It takes a confusing mass of millions of sticks and turns them into a home. And it’s always the female bird that does this. If it were the male’s job to build a nest, he would show up with maybe one twig. Then the female will go out of her way to work his twig into the nest among all her twigs, and then one day he’s going to go crazy looking for it. “Honey, have you seen my twig?” And she’s going to go, “It’s there! Move stuff around!”

Men, in the meantime, hunt. And when you’re squatting in the woods and charging after animals, you don’t want to do it with a diaper bag and a wheelie suitcase in one hand and a packed stroller with your dry-cleaning slung over it. You want to hold one spear. And you also want that spear to be able to take pictures and receive text messages. (“OMG 8^O It’s a buffalo! Stay low and be very quiet. LOL!”)

But what do we do because of these differences? We argue. And even that doesn’t go smoothly. Usually, about ten minutes into the argument, the husband suddenly finds himself thinking: “How did we get to the subject of laundry? I thought we were arguing about toothpaste!” Because that’s where women economize. Instead of having three separate arguments, they have all three at the same time, and jump back and forth between them.

So that’s what it boils down to. Maybe if we understand that, we can “get” where the other party is coming from in any given argument, and hopefully have less of them. Or at least have them all at once, and get it over with.