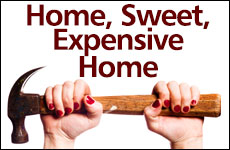 I am one of those Jews who knows nothing about home improvement projects, other than how to write the checks for them.

When I stepped out into my backyard the other morning, I had a rude shock: a man was digging a trench that cut a diagonal swath from one side of the house all the way across the yard to my office, formerly known as the garage. True, I had hired a handyman, Paul, to “fix a few things” around the house, but this digging business was a real head-scratcher.

I wouldn’t know a circuit breaker from a windbreaker.

“Umm, excuse me, Paul? What’s with the trench?” I asked. Paul looked at me as if I had severe amnesia. “Because you told me you wanted a new air conditioner unit in your office. Remember?”

“Yes, but what does that have to do with anything?”

Paul raised his eyes as if beseeching heaven, trying to be patient with me. “The new AC unit I bought runs on 220 volts. Your office is only wired for 110. So,” he shrugged his shoulders and grinned, “naturally I have to dig a trench to run the new wiring.”

This neatly summarizes the perils, the terrors, and the daily excitement that accompanies almost any home improvement project. You want to do something simple, like install a wall-mounted AC unit in a small office, but before you know it a strange man is digging up your yard. By the time you discover this, it will be too late to decide to suffer through another summer with your old and ailing AC unit, which groans loudly in protest when you turn it on and which cannot get the air cooler than 80 degrees -- on a good day. This is because your handyman has already cracked your wall open to make room for the larger unit, has shoveled away the broken plaster, and has instructed his helper to dig a trench in your yard.

I am one of those Jews who knows nothing – and I mean nothing – about home improvement projects, other than how to write the checks for them. I wouldn’t know a circuit breaker from a windbreaker. Nothing makes me feel more like a stranger in a strange land than when I am forced for some reason to go to Home Depot, with the assignment of finding something called a “male aerator.” I don’t know what this world is coming to when even faucet hardware is suffering from gender confusion. This is why I am so vulnerable to the fix-it trade, where the fix is in when it comes to people like me, who have no choice but to agree with whatever the guys with tool belts tell me.

In all our years of home ownership, there isn’t a single home improvement project that didn’t spread like an oil slick to other parts of the house. For example, this time, the guy digging the trench hit part of the old sprinkler system and cracked part of it. What I hoped was a “small repair” job to replaster and repaint part of a bathroom ceiling where it leaked during the rainy season turned much bigger when the handyman discovered mold.

Rare has been the project that didn’t have more complications than figuring out the seating chart for a 400-guest wedding, and lead to months of living on rice and beans, because after the cost and time overruns of your “simple” projects you can barely afford chicken for Shabbat. Almost every dollar you earned in the last six months is now in the bank account of Home Depot.

After our disastrous bathroom remodel of ten years ago, I swore I’d never try to improve my house in any way, other than paint the walls every few years. A leak under the tub had ruined the sub-floor, and apparently, you really need a sub-floor, otherwise you might be taking a shower one minute and in a very subterranean level under your house the next. It’s dirty and dark down there, and it’s a place you don’t want to visit. We hired someone to do a simple remodel of this bathroom. “Just something with a working subfloor,” we said. Simon, the “contractor” (I use the term loosely) confidently promised a three-week project time, start to finish. But then the bathtub got stuck on a slow boat from Macau, the tile I picked was on backorder from Spain, and when the materials finally showed up, Simon’s crew disappeared. The new tub sat on our bedroom floor for six weeks. Simon stopped picking up his phone when I called, and after my messages became just short of pathologically hysterical, he called back and said he’d been on jury duty for a few weeks. Such a patriot.

For weeks I was held captive by Simon and his lies, afraid to leave my home in case his elusive crew of the Three Stooges showed up again to rebuild my bathroom. After the third week of no-shows, I thought I might lose my mind. I threatened Simon with a lawsuit on another unanswered voice mail, and did not understand why he didn’t make sure the job was done just to get rid of me. If I had been him (God forbid), I certainly would have wanted to get rid of me, and might have even hired a hit man to make sure of it.

Simon’s stooges finally returned and filled in the hole in my bathroom with what I hope was a subfloor. Then they shoved the tub inside it. Their tile work was messy, but I didn’t care anymore. I just wanted them gone. They finished their handiwork by installing the large faucet that came with the tub in the bathroom sink, and the small faucet meant for the sink in the new tub. If I could have used the leftover grout to bury them all alive I would have done it. Instead, I made two calls: one to my attorney; the second to a psychiatrist.

However, just like women forget the pains of childbirth and go on and have another baby, we who have suffered through home improvement projects can also forget those pains and endure another long gestation that is filled with heartburn, wild mood swings, and weight gain (because you can’t go to the gym if you have to wait around the house all the time just in case the workers decide to show up).

Happily, my new air conditioner is keeping me cool in my office this summer. I try to avoid noticing how badly the office needs painting (it’s been about ten years, and it’s dull as dishwater.) I really, really would like a fresh coat of paint, but if I do that, why not get rid of this old ratty carpet in here? And this old desk, it’s just huge, it was made for the days when computers were so large, it sure would be great to have something streamlined, clean and open looking. Uh oh, I see where this is going, and I can’t afford it. Not financially and not emotionally.