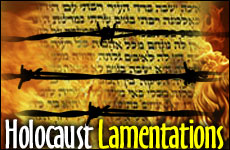 With survivors in mind, the Book of Lamentations comes hauntingly alive.

I grew up surrounded by survivors -- my grandparents, heroes from the books I read, elderly neighbors. You could say that I was a third generation Holocaust victim. I remember waking up from nightmares, darting out of bed, my teeth chattering as I rushed into the safety zone of the light bulb hanging from the closet ceiling. The Nazis that chased me through the streets, their long rifle aimed at my back, their vicious sneers taunting me, were all as visible in my dreams as if I'd actually be reliving something I'd experienced.

While other kids my age feared a nuclear war, the PLO, or the Evil Empire, my mind was preoccupied with strategizing escape routes, conjuring up hiding places, and deciding which gentile could be entrusted to hide us and not betray us, should the necessity arise with the return of the Nazis.

Mrs. Weinreb lived on our block. An elderly widow, the sole survivor of a large family, she lived in abject, harsh loneliness. My parents welcomed her into our home and made her feel that she was part of our family. She would try to find vegetables to peel, dishes to wash, or she'd resort to her own creative tactics, always to reassure herself that she was needed and useful.

"You will never know what went on there. I myself find it hard."

Occasionally, when she was ill or simply feeling forlorn, my mother would send us children to visit with her. We'd play table games and listen to her reminiscence about the good old days. Her walls were plastered with pictures of an era gone by. Portraits of her mother and father, her grandparents, uncles and aunts, her sisters and brothers, all stared down at us, silent testimony to a world that once was. But the photos I found most difficult to look at were those of her beautiful twins charmingly dressed in sailor outfits, huge white bows pinned to their hair. Children who were snatched out of her arms and tossed into the fires of Auschwitz.

When Mrs. Weinreb would unburden her painful memories to my mother, I'd look on with wide eyes and a lump in my throat. Once she turned to me, her palm spread over her forehead, her eyes filled with anguish, "You will never know what went on there," she said. "No one will really know. I myself find it hard. I ask myself ‘How did I go through this war and remain alive, with my wits intact?' No," she said shaking her head wisely, "you will never understand it."

As I grew older, I learned to put aside the Holocaust. There was a happier side to life as well. Life was too short to allow oneself to be pulled into an abyss of dismal stories of tragedy and sorrow.

And the Book of Lamentations that we read on the Eve of Tisha B'Av is as appropriate today as it was in the time of the Holocaust and the Spanish Inquisition and no less true then during time of Destruction of the Temple when Prophet Jeremiah penned those words.

On this day I think about victims such as Mrs. Weinreb and cry for them, the survivors who emerged from the ashes with nothing but their aching losses, excruciating memories, and, often painful guilt feelings, to accompany them for the rest of her life. With them in mind, the Book of Lamentations comes alive:

Alas – she sits in solitude! The city that was great with people has become like a widow...She weeps bitterly in the night and her tear is on her cheek...Those who I cherished and brought up, my enemy has wiped out. (Lamentations, 1:1,2, 2:22)

The Lord has delivered me into the hands of those I cannot withstand...Pour out your heart like water in the Presence of the Lord; lift up your hands to Him for the life of your young children, who swoon from hunger...(1:14, 2:19)

"One young girl standing at my side succumbed. For a moment, it appeared as if the Nazi turned aside and she hurriedly slipped the banana into her mouth, banana peel and all. We all froze, our fingers continued working on auto pilot.

"‘It tastes good, doesn't it,' the guard sneered superciliously. ‘Here, I'll give you another one, open your mouth.' He aimed his rifle. The bullet shot straight into her mouth."

...Her enemies saw her and gloated at her downfall...From on high He sent a fire into my bones and it crushed them...Oh bring the day You proclaimed and let them be like me! Let all their wickedness come before You and inflict them as You inflicted me for all my transgressions...(1:7,13, 21,22)

On Tisha B'Av I think about the unfathomable hunger. Human beings were, at times, reduced to crawling on their legs in pursuit of a morsel of bread and I remember the chronicles of desperation that I heard spoken:

Two weeks later, one of them, a former world-famous banker stood trembling at the far corner of the barracks. The striped prisoners garb now replacing his fur coat, hung over his emaciated body facing an S.S. officer leaning calmly against a wall, smoking a cigar. The banker reached into his pocket, removed a black velvet pouch and emptied it into the Nazi's outstretched palm. A bag full of diamonds fell into his hands. In exchange for that, he received a loaf of bread.

This was a loaf of bread in Auschwitz.

The enemy spread out his hand on all her treasures...All her people are sighing searching for bread. (1:10,11)

One day, while all others were marched to their labor sites, two concentration camp prisoners were ordered to remain behind to clean the barracks. While sweeping the damp floors, one of them discovered, under a loose floorboard, a loaf of bread and eagerly called out to his friend to come and share this spectacular sight.

A loaf of bread in Auschwitz!

"I know who this belongs to," said one. The bread belonged to a Polish prisoner, a vicious anti-Semite, also an inmate in that barracks. For one long moment they eyed each other, their hunger pangs entreating them, until the decision was made, "Let us return the bread. Let the Gentiles say that Jews don't steal!"

Here leaders were like deer that found no pasture, but walked on without strength before the pursuer (1:6).

Throughout the long exile, the Jewish Nation has been targeted again and again by hatred and persecution. Yet the indomitable spirit of the Jew has lasted throughout the generations.

The tears we shed on Tisha b'Av, year after year, is testimony to the fervor of our longing and hope.

Today, so many years after the destruction of our Holy Temple, it's difficult to comprehend, let alone mourn the enormity of the loss. We've never seen its splendor, nor experienced the feeling of closeness to God it engendered. Yet Tisha B'Av has remained a day of tragedy throughout the generations, a potent reminder of where we are and were we belong, a time of communal mourning in memory of the Jewish past, both recent and ancient, throughout the years of exile.

On this day the destruction of the First and Second Temple occurred, the expulsion of Jews from England in 1290, and from France in 1306. In 1492, the Inquisition edicts were signed in Spain. Pogroms and World War One which culminated in Germany's "Final Solution" have all occurred on this momentous day. And let's not forget the tragedy of our times. Today, we live in an era of spiritual darkness, an epoch where mass annihilation of Jewish souls is happening around us.

My eyes shed streams of water at the shattering of my people. My eyes will flow and will not cease – without relief – until God looks down and takes notice from heaven...Remember, Lord, what has befallen us, look and see our disgrace... Bring us back to You, God, and we shall return, renew our days as of old. (3:48, 49, 5:1)

The tears we shed on Tisha b'Av, year after year, is testimony to the fervor of our longing and hope. In the future, this day of mourning will transcend all suffering, and become a day of indescribable joy. Tisha b'Av is the birthday of Mashiach who will bring us back to Jerusalem of old.

May the tears we shed this Tisha B'av be the last tears for all time, and may we rejoice with the fulfillment of the blessing, "Those who mourn over Jerusalem will witness her joy!"

Mirish Kiszner is a seminary teacher living and working in Jerusalem. She also works as a freelance writer and has published dozens of articles. She is the author of Dear Libby (Artscroll), a compilation of questions and responses for kids about real life matters culled from the popular column featured in Mishpacha Magazine. Dear Libby's real life situations stimulate excellent parent-child discussions through helping kids identify with other kids.

History Abuse
Blessing on Chewing Gum
Was Rahab a Prostitute?
Extras In Our Own Epic
Comments
MOST POPULAR IN Israel
Our privacy policy