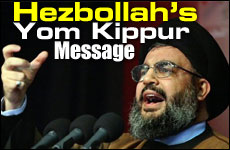 The door to holiness is in you. It’s the one marked "mistakes."

Nasrallah, the Secretary-General of Hezbollah, in rare praise, said that the Israelis, "Study their defeat in order to learn from it."

He contrasted this to Arab states that, "do not probe, do not ask, do not form inquiry commissions... as if nothing has happened."

When one of the world’s most heinous anti-Semites comes in praise of the Jews then surely we are fulfilling our mission as a light to the nations.

However, this thing that Nasrallah is so googly-eyed over – from where did we Jews learn it?

You might say it’s obvious, and it is, once it’s pointed out to you. In fact, it’s so obvious (when it’s pointed out) that someone as vile as Nasrallah cannot hold back his admiration despite his extremely overt hatred of anything Jewish.

It’s obvious, but it isn’t natural. What is natural is what many of us do -- hide, deny, ignore, and if that doesn’t help, place at the bottom of our to-do list. Me too.

The holiness of Yom Kippur exists in the space we make through our mistakes.

This is not just the path to success; it’s literally the doorway to God. This is the path to sublime bliss, or what we call Holiness. The entrance to the Holy of Holies is through what we did wrong, not what we did right. The great holiness of Yom Kippur exists in the space we make through our mistakes.

If someone like Nasrallah can see how productive examining one’s mistakes is, then why isn’t it universally practiced?

Why do we all, from governments to businesses to individuals, down to our own inner mind games, live in a world of denial? Our minds naturally avoid responsibility for errors, and we only admit when there is no other choice.

It’s easy to see in all the people around us -- how counter-productive denial and avoidance is, and how these vices create massive amounts of pain, suffering and self-inflicted dead-ends. But it’s not so easy to see in ourselves because we have trained our eye to look away and ignore any personal faults.

This is the reason why people find Yom Kippur so frustrating. We are afraid of our mistakes. This in and of itself is a massive mistake, because what you do wrong has more opportunity for growth than anything you do right.

The Talmud says, “Where someone who has corrected a mistake stands, even a completely righteous person, who has never erred, cannot stand.”

Let me give you a paradigm of life: A horse race.

In this race one of the jockeys has a severe headache and loses. After they dismount, the jockey in question politely explains to the winner his problem and asks for a "do over."

There is no “do over” button in life. But in teshuva, there is.

There is no “do over” button in life. King George can’t say to George Washington, “We really weren’t at our best, do you mind if we start all over again from Lexington?” You did it, or didn’t do it, or you messed up big time. You can’t fix the past, it’s done.

The reason people don’t look at their mistakes is because you can’t go back in time. What gain therefore, is there in figuring out what you did wrong?

Yes, I know, there is a small chance that this same situation will arise again, and therefore by learning you won’t do it again. But that’s only a slight possibility, what is almost an inevitable outcome is that your blunder will mark you as a failure, or worse. With that in mind, denying you were the one who overpaid, or forgot to put it in the mail, or any number of real life gaffes, sounds reasonable.

However, learning from your mistakes is much more than a competitive advantage concept. If that was all it was, then it would have never been anything more than a nice idea. Practiced by no one. No one would be that brave to raise their hand to say, “It was me.”

Rather, it’s a concept of holiness. The secret to Yom Kippur.

God is not limited in time. If you enter God’s space, you enter a place where the past is as real as the present.

If you fix the present, then God can fix and change the past in such a way that your mistake never happened. This is why and how we enter the Holy of Holies – by sitting with God in His place. In His place everything is possible, even the past.

As long as you say, I have everything under control, then you are still here on Terra Firma in the present. But if you can say, “I messed up and I don’t know how to fix it anymore, I give it to You.” Then you have entered God's space and time doesn’t matter anymore. That experience and encounter is so transformative, so meaningful and so utterly uplifting, that even our enemies take notice.

Therefore, I wish you all on this Yom Kippur, an experience of the great overwhelming love and holiness that derives when we connect to our Creator.

The door to bliss is in you -- it’s the one marked "mistakes."

The Anxiety and Joy of Teshuvah
Why Bats Sleep Upside Down and The Secret of Yom Kippur
Kubaneh, Yemenite Bread with Spicy Tomato Sauce
Vayelech 5783: Regret and Repent
Comments
MOST POPULAR IN The High Holidays
Our privacy policy
Aish.com Is Looking for Great Writers

Why Bats Sleep Upside Down and The Secret of Yom Kippur
Kubaneh, Yemenite Bread with Spicy Tomato Sauce
Vayelech 5783: Regret and Repent
Rabbi Sacks: Focus On the Important, Not the Urgent
Put Your Foot Down: Are Human Feet Poorly Designed?
Everything Bagel Pizza
Jews and Weight Loss
Scientist Asserts Earth Was Designed
Save the Children: Yvonne Nèvejean and Queen Elisabeth of Belgium
Three Ways to Make Yom Kippur Meaningful
1 2 3 … 2,913 Next »