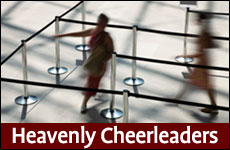 How an Aish.com article changed some people's lives.

I admit it. I am a hopeless Aish.com fan. Put me in front of a computer and after I read my email, I will invariably check "what's new" at Aish.com. Over the years, I’ve developed some favorite authors, one of whom is Sara Yoheved Rigler. I look forward to her new articles with anticipation: always a good read and important life lesson.

One article hit home in a big way. Entitled “Heroes: A True Story,” it described Anne, an American living in Israel, who had run away from an abusive marriage and was facing multiple challenges: kids, finances, health and of course, emotional issues. Being in a similar position, I grabbed the article's moral like a lifesaver. When you overcome strong, negative emotions, the Heavenly reaction is greater than the crescendo-filled, heroic triumph at the end of a movie.

Thirsting for encouragement against formidable odds, I tried to listen for my own celestial cheering squad whenever I struggled and won.

Years later, the same article re-appeared on Aish.com as an "Editor's Pick," reruns of articles worth a second look. I eagerly read it again, glad for the reminder of my Divine support system. It occurred to me to show it to my boss, who ran a charitable organization that helped such people. "You only know about their financial problems," I announced, placing the article on his desk. "You need to see the emotional challenges they face to understand how vital your help is."

He read the article and was moved. "Get the author on the phone for me."

Mrs. Rigler knew me only slightly. I had sought her out when in Israel to let her know how much I enjoyed her writing. When I reached her, I told her my boss wants to help Anne. She was astounded. "I didn't even know Aish re-ran that article. I just got off the phone with Anne. She's in a terrible situation. I've called everyone I know and ran out of people to ask for help. And now, because Aish.com re-ran the article, and you showed it to your boss, he wants to help? Amazing!"

The story continues. Anne and I spoke and shared our common bond. Not content with taking from others, Anne inquired if we knew of a job for her. Somehow, my boss found a spot for her in the very organization which had just helped her. We stayed in touch for a while and then, both busy single moms, went our separate ways. Eventually I had heard from Mrs. Rigler that Anne was doing much better.

Ten years later, I am re-married, living in a new community, and still a Sara Rigler fan. Wanting to share her wise Torah perspectives with my new neighbors and friends, I took it upon myself to coordinate her talks in my area.

Mrs. Rigler was coming to speak right after Passover and I got busy advertising her new workshop. In the meantime, Passover was fast approaching and my daughter, who lives in Israel, planned to come to the States this year with her husband and children. My organized housewife side got into immediate conflict with my doting Bubby side. How could I get everything done for Passover and still have plenty of time to play with my grandchildren, who I only get to see twice a year? I was determined to find a way. Early morning and late night cooking sessions, some extra cleaning help and lots of computer shopping lists and menus made it possible. After a whirlwind two weeks of holiday feasting, kid-friendly outings, playgrounds and toy stores, it was time for them to go back to Israel.

Emotions run high when six-months worth of maternal love has to be crammed into two weeks and I was feeling a bit sad and insecure. Had I done enough? Had I been sensitive enough to "their" way of doing things? Did I "earn my keep" in God's eyes? I wrote all this to my daughter the night before her flight, feeling as teary-eyed as when I first sent her off to seminary. I waited to hear that she had arrived safely and looked forward to her response.

She wrote, "Ima, I will answer your letter soon, but in the meantime, I have very special regards from my seat mate on the plane." I couldn't imagine who it was. She said the woman had been very kind to my grandchildren, so towards the end of the flight, my daughter wanted to express her thanks. The woman told her that she was visiting the U.S. for her son's engagement and shared some "nachas" about her other two children, mentioning her exceptional pride because she had to raise them on her own.

My daughter said, "My mother was also a single mom, and we were six kids." A few more details and something in the woman's voice changed. She asked more intensely, "Did your mother work for a rabbi?"

Your mother saved my life.

The seatmate broke down in tears. "Your mother saved my life. She told the rabbi about me and they helped me get a job and get back on my feet." It was Anne.

My mind flooded with memories. I caught my breath as I realized that this meeting was no accident; it was the perfect Heavenly response to the note to my daughter. My cheering squad had truly kicked in. I could just hear them saying: "You think you have to prove your worth? We’ll send someone right next to your daughter on the plane who will remind you who you really are and how much your efforts matter.”

There is no such thing as a coincidence. Anne didn’t sit next to my daughter to be kindly to my grandchildren. She sat next to her to remind me that overcoming negative emotions, even self-pity and insecurity, really does shake the very Heavens.

I learned it from Anne’s story years ago and, not coincidentally, she found my daughter so I could learn the message from her again.

Letting Go of My Boys

Not Another Parenting Class!

Remembering Dad
Why My Iranian Mother Didn’t Want Me to Become a Religious Fanatic
The Jewish History of Prague
Why the Sexual Revolution was Bad for Women
Comments
MOST POPULAR IN Family
Our privacy policy
Aish.com Is Looking for Great Writers