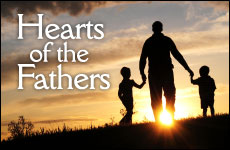 Since the divorce, my ex-husband won't have anything to do with our sons. Is it wrong to hope for a miracle?

The metal frame of our back door screeches in protest as my seven-year-old yanks it open. I tear my gaze away from the computer monitor. My six-year-old, Eli, looks up from the puzzle he’s absorbed in.

“Mommy, look!” Mordy bursts into the room, his face smudged and his kippah dusty from a long day at school. He’s waving a bright blue piece of paper, which turns out to be an invitation to his class’s celebration upon completion of the Book of Genesis.

“Mommy, can we bake cookies for my party?” he asks, dancing around the room.

“Sure, Mordy. Let me just call your teacher to be sure that’s what he wants.”

Fast forward three hours. Dinner is over, and I’m wiping crumbs off the tablecloth. Eli splashes happily in the bathtub. Mordy is conspicuously quiet.

I find him lying on his bed, gaze fixed on the ceiling, ignoring the pile of library books nearby.

I cross the toy-strewn carpet to sit down next to him. “Is everything okay, Mordy?”

“You’re sad? But wasn’t today a happy day for you, because you’re finishing the book of Bereishit?”

“I’m sad because Daddy’s not going to be at my party, and all the other fathers will be.”

Rubbing his back I say, “I’m sorry, Mordy. I know it’s hard for you. I wish things were different.”

My son hasn’t seen his daddy for over two and half years. This is not for lack of trying on my part. Although we live on different continents, Mordy and Eli are supposed to visit their father twice a year, and talk to him on the phone twice a week. In actuality, they’ve seen him only once since the divorce happened, three years ago, and have not talked to him on the phone in over two years.

Today, when all the kids in his class attend father-son learning programs, Mordy reviews what he learned either with me or with my father. When the other kids come to their school’s Sukkot celebration with their fathers, Mordy and Eli arrive alone and dance with their teachers (who fortunately remember to look out for them) and their friends, and occasionally their friends’ fathers. At Mordy’s alef-bet party, which culminated in the kids dancing on their fathers’ shoulders, my father managed, through superhuman effort, to get Mordy onto his aging grandpa shoulders and dance for five minutes, and then told me afterwards that one of my brothers had to come along next year for Eli’s performance, because Zeidy’s back couldn’t handle it a second time.

Different kids react to adversity in different ways. Eli, the younger and more easygoing brother, takes everything in stride, while Mordy takes everything to heart. He copes by drawing endless pictures of himself with his daddy, writing on the top of each page, in his loopy seven-year-old handwriting, “Mordy reelly reelly misses Daddy.” He made a birthday card for Daddy, which is still sitting on my desk two weeks later because Daddy has moved to a new city and we don’t have his address.

I try to encourage him by telling him that chances are, he will one day see Daddy again, even though we don’t know when. I tell him that Daddy still loves him, even if he doesn’t show it right now. I tell him that not always do fathers know what to do with their feelings, and sometimes fathers think that the best way to deal with difficult feelings are to ignore them, even though we, Mordy and I, both know that’s not true. We know that it really would be better for Mordy and Daddy both (and let’s not forget Eli) if Daddy would allow himself to be drawn into a relationship with these two lovable boys, and allow them to visit him again, and answer the phone when they call him.

But Daddy won’t, and we can’t change that. So right now, we just hope. We hope for the best, and we don’t anticipate any great changes in the future.

I tell him that he’s a very precious boy and one day he’ll see how much his daddy loves him.

In the meantime, I tell Mordy to pray, because prayer can change everything in the blink of an eye. I tell Mordy that miracles do happen, and one day he may yet see his dreams come true. I tell him that he’s a very special boy, a very precious boy, and one day he’ll see how much his daddy loves him.

We’re taught not to hope for miracles. It’s too hard on psyche, and too unfair for little boys to live that way. But we can anticipate the future, the day when the hearts of the fathers will return to their sons, and the hearts of the sons to their fathers. Because one day, my boys will be reunited with their Father, and He will tell them how much He loved them through all the suffering they underwent.

We can’t count on their flesh-and-blood father. But their Father in Heaven is always there for them, as evidenced by all the good He does for us, in giving us a roof over our heads and a loving family nearby, and in giving Mordy and Eli only good memories of their father instead of, God forbid, the opposite. And we pray to Him that things should improve, slowly but surely, so that Mordy and Eli can one day have a daddy again.

As the prophet says, “[Elijah] will return the hearts of the fathers to the sons.” May it happen soon, in our days.

Tehilla Shapiro is the pen name of a writer and editor living in Jerusalem with her two children. Her writing has appeared in the London Jewish Tribune and numerous other publications.