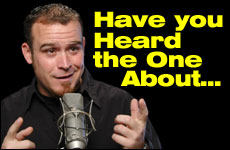 The funniest Jewish Jokes I’ve heard – and why.

In over 20 years of writing Jewish humor, I think I’ve heard every single Jewish joke every told, written, and repeated in books, online, from records (those round vinyl things), and from comedians. I’ve even made up a few (hundred) myself.

I think I’ve heard every single Jewish joke every told.

On such JJ (Jewish Joke) overload, you can imagine how long it takes to a) find a new one for my books and calendars; b) find a new funny one that isn’t the third cousin of a joke I used in 1999.

Yet, among the tens of thousands, there are some that still make me slap my good knee (a hard find these days).

So for you, dear readers, I bring you these special jokes. The criteria?

Some you’ve probably heard, some may be new. But for each, I also offer a brief opinion about why these are special and “Jewish.” For those who claim there’s “no such thing as a ‘Jewish’ joke” read on. I hope you enjoy! (Will you agree? Of course not) But, a terrific joke is like that girl with the curl. When they’re good they’re very very good, showcasing our unique culture, spirit, wit, special brand of sarcasm – and yes, sometimes narishkeit.

Four rabbis engaged in theological arguments, and it was always three against one. Finally, the odd rabbi out appealed to a higher authority.

“No,” said one of the others. “A little snow in winter is unusual?”

A huge icicle sent a tree tumbling. “Now is that not a sign?!”

“A sign of nature!” they insisted, again making it three to one.

Just as the rabbi was about to beg an even bigger sign, the sky blackened and a booming voice intoned: “HEEEEEEEE’S RIIIIIIIGHT!” The rabbi, hands on hips, said, “Well?!”

The others shrugged, “Big deal. So now it’s three to two.”

Not only do we Jews (on occasion) disagree, we’re the only religion that both reveres God … and, in humor, makes Him an equal partner so to speak, and yes, sometimes the “victim” in jokes. Remarkable!

Get it! You’re Jewish!

Yeshiva University decided to create a crew team. Unfortunately, they lost every race. Each day they practiced for hours but always came in dead last. Finally they sent Yankel to spy on the Harvard team. Yankel shlepped off to Cambridge and hid in the bushes off the Charles River from where he secretly watched the Harvard team practice. After two days, he returned, satisfied.

“I’ve figured out how they do it,” said Yankel to his eager teammates, huddling around him. “They have eight fellows rowing and only one fellow screaming!”

Okay, it’s a stereotype, but the mixing of white bread (them) vs. challah (us) is funny. The moral? We Jews should stay away from things we don’t know from, like moving big sticks in boats – or on slopes.

Irwin and Murray celebrated selling their raincoat business by going on safari in Africa. One night in the jungle, they were frozen in their tracks by an ominous, low roar.

Not only should Jews stay away from unnecessary moving big sticks, but also dangerous places!

And while we’re on the subject ……

The next morning, Goldfarb looked worse.

“Nu? Did you count?” asked Vogelman.

“So what’s the problem?”

We Jews have been known to worry from time to time. We’re not talking “usual” worry about children, health, business. No. We’re talking deep worry which is why we’re mavens at “what if?”and are constantly oysgemater (exhausted).

God, You Forgot Something …

A Jewish mother and her 4-year-old walked along the beach when suddenly a gigantic wave rolled in, sweeping the little girl out to sea.

"Oh, God," lamented the mother, her face toward heaven. "This is my only baby, the love of my life. I’ve cherished every moment with her. Please God! Bring her back to me and I'll go to synagogue every day!"

Suddenly, another gigantic wave rolled in and deposited the girl back on the sand, safe and sound. The mother looked up and said, " ... she had on a hat ...”

Part of the Jewish mind set is “Never Satisfied.” Good enough isn’t always … enough. Hey, if God forgot to send back a hat, can a small reminder hurt?

David received a parrot for his Bar Mitzvah. This parrot had one bad attitude and worse vocabulary. David tried to teach him manners, but the bird just got ruder and cruder. Desperate, David put him in the freezer to cool off. He heard squawking, then quiet. Frightened, David quickly opened the freezer.

The parrot calmly walked out and said: "I'm sorry I offended you, Master David. I shall go to synagogue, pray, and modify my behavior.” Before David could ask about this astounding change, the parrot continued, "Sir ... may I ask what the Empire chicken did?"

Believe it or not, many don’t get this one. But We Jews, with our Yiddishkeit and our brilliant imaginations can visualize the humor of the parrot, who upon seeing the “disciplined” frozen chicken, walked out in repentance. Jewish hysterical!

The Yiddish Dictionary of Fools
The Power Of Prayer
Va’etchanan 5782: A for Effort
Can You Show Me This "God?"
Comments
MOST POPULAR IN Jewlarious
Our privacy policy
Aish.com Is Looking for Great Writers