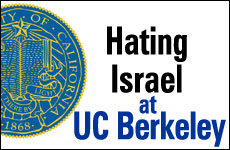 Why Jessica Felber is suing the university and is concerned for Jewish students everywhere.

Jessica Felber, a graduate of UC Berkeley, filed a lawsuit against the university regarding an incident that took place during her time as a student there.

Aish.com: Tell us what happened.

Jessica: Our student group, Tikvah Students for Israel, held a pro-Israel event called “Path to Peace” at the same time as an anti-Israel demonstration in the middle of the U.C. Berkeley campus. I was holding a sign that read “Israel Wants Peace.” “Students for Justice in Palestine” (SJP) was supposedly collecting toys to donate to children in Gaza. They used large shopping carts to collect and store the toys. On their way out, one of the leaders of SJP who was rolling one of the shopping carts away purposefully sped up behind me and rammed it into my back. I went to the police immediately and they arrested him shortly thereafter. After the police station I went to the University's Urgent Care with a cut and bruises, where they prescribed me pain medication for pain that lasted over a month. I was also harmed emotionally, and received counseling for the remainder of the semester.

Aish.com: Tell us more about “Students for Justice in Palestine.”

Jessica: Unfortunately, these radical groups on America’s campuses do not care about the Palestinian Arabs at all. If they did, they would protest the mistreatment of Palestinian Arabs in Jordan, Lebanon, Kuwait, and the rest of the Arab world, while supporting Israel in its struggle for peace with the Palestinian Arabs. These groups are really just out there to delegitimize Israel and intimidate Jewish students into not speaking out against injustice.

Aish.com: Is this kind of physical aggression common place? Should Jewish high school students be afraid to go off to college?

Jewish students across the country are feeling intimidated and threatened by anti-Israel and anti-Semitic groups.

Jessica: Physical aggression certainly does not happen every day, but it does happen often enough that many students feel intimidated to speak up, especially when they hear accusations of war crimes, apartheid, racism, and genocide against Israel. But not only should Jewish students not be afraid to go to college, we need them there to speak out against the injustices Israel is facing! Thankfully, most college students today have access to great organizations such as Hasbara Fellowships that help them speak up for Israel and challenge the lies about Israel that are so ubiquitous on campuses.

Aish.com: Why do you think this happened to you?

Jessica: Since the Israel’s detractors couldn’t challenge me intellectually, their only option was to silence me by physical intimidation. Also, I was an easy victim; I was a small Jewish girl standing alone supporting the Jewish state.

Aish.com: Did they succeed in silencing you at all?

Jessica: Absolutely not! I finished my term as president of Tikvah: Students for Israel and took a job as the California Campus Coordinator for Hasbara Fellowships so I could continue to help students speak up for Israel on campuses even after I graduated. None of this is meant to toot my own horn. I would not have been able to do it without the support system around me. The Bay Area Jewish community rallied around me, encouraged me to stand up for my rights, and to continue speaking out for Israel.

Aish.com: U.C. Berkeley is one of the most politically active campuses in the nation. Last year it was the scene of a huge controversy over an anti-Israel divestment bill in the student senate. Is this only a U.C. Berkeley problem?

Jessica: No. Though Berkeley has a long history of political activism and radicalism, anti-Israel movements exist all over the United States. Jewish students across the country are feeling intimidated and threatened by anti-Israel and anti-Semitic groups like SJP and MSA. And I always tell students at quieter campuses: you never know when this stuff will pop up at your campus. So, Jewish students should be making the case for Israel at every campus. Either way, we don’t need to wait for anti-Israel radicalism for us to educate America’s future leaders about the importance of supporting Israel.

Aish.com: If you could give America one message about this case and the climate on college campuses, what would it be?

Jessica: Jewish college students feel unsafe on campuses around the country, but we need them to be there more than ever. UC Berkeley is just one school of many that has not taken the necessary steps to ensure the safety of Jewish and pro-Israel students from violent groups like SJP and MSA. I hope this case will help improve this dire situation for Jewish students throughout the U.S. so that they will feel safer to continue speaking up for Israel.

What is a Mensch?: The Inspiring Story of Armitron CEO Eugen Gluck

If You Were Born a Jew
Lessons from the Book of Jonah
Where Are We? The Body, Brain, Soul Problem
Dr. Sheila Nazarian’s Escape from Iran
Comments
MOST POPULAR IN Israel
Our privacy policy
Aish.com Is Looking for Great Writers