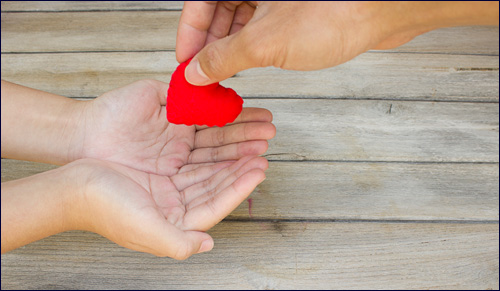 My work in social services has shown me that no matter how destitute and troubled people are, they have a burning desire to give.

One cold morning in Upstate New York, I pulled my car up next to a dilapidated curb in front of a dilapidated apartment building. I was a case manager for high risk teens, and most of my clients lived in places like this. I commonly side stepped rats and roaches (and sometimes sleeping bodies) as I made my way through dark hallways on my way to an apartment door.

But this morning, my client came bounding out of her building to meet me. Her excitement was palpable, even through the frozen car window

She bounced into the passenger seat and started talking right away. “Can we go to the food pantry?” she asked.

I was confused. We had gone to the food pantry a few weeks ago, and she was only allowed one visit a month. This was the week after Thanksgiving and she'd been the recipient of a donated Thanksgiving food basket – a turkey and all the fixings.

“Oh, you misunderstand,” she continued brightly, “I don't want to get food, I want to give food.”

Only then did I see the small grocery bag in her hands. She dug around the crinkly plastic and pulled out two cans of cranberry sauce.

“They were in the Thanksgiving basket,” she explained. “I don't like cranberry sauce. I thought I could donate it to the food pantry.”

This was the first time in her life she had something to spare. And all she wanted to do was give.

This girl was one of my oldest clients – almost 21. She had dropped out of school at the age of 16 to care for her father who was dying of cancer. After nearly a year of selfless care, he died and she was left alone. Too embarrassed to go back to school but unable to get a job to pay rent, she wound up on the streets living under a bridge. Eventually, she got connected with services, earned her GED, and became a pharmacy tech. It paid just enough to make rent, but paid for little else.

I often brought her to the food pantry. On occasion, I got her clothing vouchers so she could rifle through the used and worn jeans and shirts at the charity shop. One time, I helped her apply for a library card. She spent most of her free time reading books in the warm, quiet between the book shelves.

In my little car, she continued to stare at me brightly. Her blue eyes raised in a smile. Still holding up the two cans of cranberry sauce, she asked again, “Can we go to the food pantry?”

This was the first time in her life she had something to spare. And all she wanted to do was give.

Giving seems to be innate to our humanity.

Scientific studies have shown that when one gives, the chemical dopamine is released in the brain. This is the same feel-good chemical that gets released when we eat chocolate. We seem to be hardwired to enjoy giving.

Giving seems to be innate. The only variant is opportunity.

Another teen client I had loved to bake, at least in theory. She and her family were so poor there was barely enough food for sustenance, much less luxurious ingredients for baking. Her mom worked three jobs to support the family and was seldom home. Left unattended, she and her siblings got into all kinds of trouble. So much so that they had been labeled “trouble.” And my client, for one, had begun to believe it.

When the holidays came around, some compassionate tellers at the local bank donated presents for the kids and teens who couldn't otherwise afford them. We managed to give this girl baking supplies – flour and sugar, baking soda and salt, a mixing bowl, measuring cup and a tray for baking.

About a week after the holidays, the front desk buzzed my office. In the lobby, the receptionist handed me a plate of large, golden cookies.

“She didn't want me to get you,” the receptionist explained, “but one of your clients left you these.”

Taped to the plastic wrapped around the beautiful cookies was a small note that simply said, “Thanks.”

It’s not only idealistic teens who exhibit this generosity. I had relocated to Connecticut and was working in a halfway house for former substance abusers living with HIV/AIDS. These men had dropped out of school before they'd even hit ninth grade. They had no formal education, no employable skills, and many had no teeth, lost to their various addictions over the years.

My job was simple – teach them how to live. How to clean a kitchen, cook a meal, speak at an interview, negotiate through a conflict, apply for a job. But first, I had to teach some of them to read.

Afforded the opportunity, our first and lasting desire is to give.

One day, the director of the agency called in sick. Her father had died and she'd be at the wake all day. The men in the halfway house were bereft. They wanted to do something for the director who had done so much for them. But they didn't know where to begin. When I offered to drive them all them to the wake they nearly jumped over each to get into the agency van.

We drove for an hour. None of them had nice clothes to wear. They walked into this awkward, new, and solemn space just so they could say, with a sincerity that can only come from experience, “I'm sorry for your loss.”

Afforded the opportunity, our first and lasting desire is to give.

God is the ultimate Giver, giving us both life and this world to enjoy. And He made us in His likeness. When we give, in some way we ignite that internal Divine spark and connect with the generosity of God. Everything we have to give was given to us first by God. So by giving to others, we are not simply giving of ourselves, we are being given an opportunity to play conduit to the Divine.

Which is why it feels so good. By giving, we in turn receive the greatest gift that can be given.

Miracle on the Hudson
Chukat 5782: Let’s Play the Blame Game!
The Sin of Moses: The Two Ways to Communicate
In Aftermath of Chicago’s July 4th Shooting, Local Moms Provide Countless Points of Light
Comments
MOST POPULAR IN Current Issues
Our privacy policy