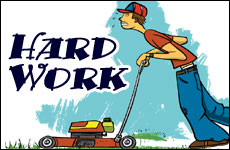 Check out this survey of the worst summer jobs for Jewish students…ever.

It’s no news that we’re in a tough job market. The other day, I helped someone put a resume together for selling bags of oranges at a freeway entrance. Yes, employment prospects are challenging for everyone, but especially for students, who are finding that in America there may well be liberty and justice for all, but there are jobs for few during their summer break.

Of course, enterprising Jewish students have figured out a way to target specifically Jewish-oriented jobs in order to cut down the competition. But some of these Jewish-themed jobs, for want of a better word, suck. That’s where this article comes in. Think of it as a survey of some of the suckiest summer jobs for Jewish students. We feel your pain, oh young ones. We were you once and we got through it. So will you. ‘Til then, despite the horrible job market, you might want to avoid these particular Least-Popular Summer Jobs for Jewish Students:

Being a regular fisherman is difficult and thankless enough – early morning hours, hard work, competition, scarcity of fish. But for those specializing in gefilte fishing, there are additional challenges. First, the gefilte fish is nearly extinct. Its tan color and oblong shape make in nearly indistinguishable from common rocks. In addition, rabbis have been raising their rates to inspect it and certify gefilte fish as kosher. Not to mention the international shortage of gefilte fish jelly to pack it in. So, even if a student is fortunate enough to reel in a job as a gefilte fisherman’s deck hand, the gefilte fisherman himself will be so stressed out that he’ll make the deck hand’s job a living hell – which, after all, is the deck hand’s parents’ job.

I know what you’re thinking. Why would a rabbi who performs ritual circumcisions have need for an intern? Excellent question. And there are reasons, all of which contribute to making Mohel Intern so undesirable as a summer student job. For example, one must comfort not only the baby but also his parents, friends and relatives, who are often even more distraught than the baby himself. In addition, when one’s classmates and friends ask what your summer job is, one must respond, “Mohel Intern” and deal with the subsequent ridicule – except for one girl in Schenectady, New York, who is oddly intrigued.

Sounds fairly innocent and fun, no? You go to a festive party and entertain the cute, appreciative kids. How could that possibly turn into a spiraling descent into the bowels of hell? Allow me to elaborate. First, you’re not attending the party as yourself. Thousands of dollars for a college education and you’ll be earning your living as the Little Mermaid, Buzz Lightyear, or SpongeBob SquarePants. That means you’ll be inside some dark, rubber, suffocating costume and it will most likely be 93 degrees at the party, which means 117 degrees inside SpongeBob. But there’s no time to wallow in your sweat and misery – you’ve got to actually entertain the little demons. That means singing, storytelling, magic tricks, dancing, impressions and more. Will the kids appreciate you? Well, if by “appreciate,” you mean heckle, ignore, cry, complain, kick you and spit on you – most certainly!

Ah, working out in Mother Nature – sunshine, fresh air, greenery. Hey, wake up and smell the Surgeon General’s Report. Sunshine causes skin cancer. The air hasn’t been fresh since 1932. And to keep that greenery green, you’ll be working with (and inhaling) pesticides, toxic fertilizers, and other chemicals just slightly less harmful than Japanese nuclear reactors. Not to mention a high incidence of injuries from dangerous power tools, frequent bee stings and insect bites, and the exhausting, backbreaking work itself. Prisoners who’ve done such work have ended up begging to return to prison, where they describe their life there as “less stressful and dangerous” than lawn service. On the positive side, there always seems to be plenty of positions open!

You’ve never worked as a summer camp counselor before? Consider yourself among the fortunate and allow me to paint you a picture of what might have been. Your supervisor will always be a white guy wearing dreadlocks. All of your fellow counselors will be painfully enthusiastic about nature hikes. The campers’ primary motivation for being there is to get away from their parents, so you will be on the receiving end of every conceivable form of misbehavior. Is all that worth it for experiencing the Great Outdoors? Only if you’re okay with ever-present mosquitoes, waking up at 5:30 a.m., gross toilets, bad food, sharing small cabins with bratty kids, and pay that is laughed at by folks in many Third World nations. You have been warned.

An Open Letter from Santa to Jewish Children

Jimmy Carter and Khaled Meshal Wed in Secret Damascus Ceremony
Why Are The Prayers Of Yom Kipur So Repetetive?
Ha'azinu 5783: A Time for Unity!
Twisted Thinking
Comments