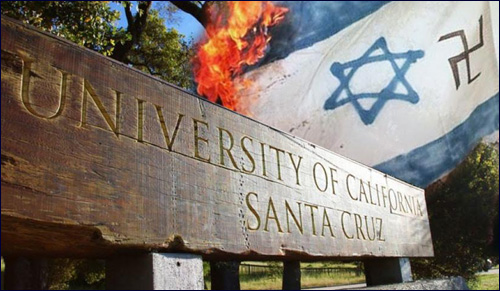 Faculty members speak out about the climate of anti-Semitism and intimidation. An exclusive Aish.com interview.

The sign – in English and Hebrew – graces the door of my brother-in-law, Ethan Miller, a professor of Computer Science at University of California, Santa Cruz. When he first told me about it – and the sanctuary he wanted to create for Jewish students on campus – I didn’t realize quite how brave a statement posting the sign was. 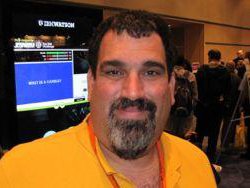 In an Aish.com exclusive, faculty members on the front line of battling anti-Semitism have shared the magnitude of the task they face and how entrenched anti-Semitic and anti-Israel attitudes are in some campuses.

In some cases, harassment of Jewish students has resulted in physical attacks. That was the allegation made by University of California, Berkeley, student Jessica Felber, who protested her campus’ annual “Apartheid Week”, sponsored by Students for Justice in Palestine and the Muslim Students Association.

Facing Apartheid Week’s activities, in which students would dress up as soldiers, man mock checkpoints around the school, and ask students to state their religion before letting them go, and in which Jewish students were sometimes spat on, Felber – along with other Jewish students – decided to set up a counter-protest, called “Israel Wants Peace Week.” As Felber stood outside holding a sign saying “Israel wants peace”, she was rammed with a shopping cart by an Apartheid-Week student activist with a long history of intimidating Jewish students. (The university eventually concluded the 2011 ramming incident “did not constitute actionable harassment.”)

Another form of intimidation is the disruption of events sponsored by Jewish organizations, now routine on some campuses. “If it’s something that has to do with Jewish students or Israel, it will just get shut down routinely." explains UC Santa Cruz Hebrew lecturer Tammi Rossman-Benjamin to Aish.com. 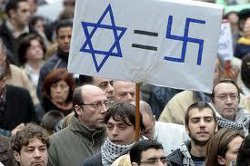 Jewish students are also sometimes shunned for leadership positions because of their Jewishness. In 2015, a University of California, Los Angeles student, Rachel Beyda, applied to be on the school’s student judicial board – and was asked if her Jewishness could be a “conflict of interest.” The following year, Stanford undergraduate Molly Horwitz was asked how her Jewishness would affect her voting on boycotting Israel when she ran for the Student Senate. 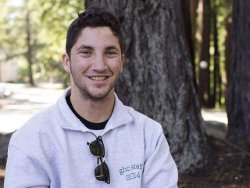 “The implication that I, as a Jewish student and leader in the Jewish community, should not be allowed to vote on an issue that so deeply impacts the Jewish community, and that I should abstain because I cannot be trusted due to an alleged, ‘Jewish agenda,’ echoes the racism Jews have faced all over the world throughout our history,” Bernstein posted on Facebook. “I am calling on the leadership at UC Santa Cruz, from the student level on up to start taking concrete action to get the anti-Semitism at this campus under control.”

Yet it’s not always easy for staff to confront the anti-Israel and anti-Jewish atmosphere pervading campus.

In 2011, lecturer Tammi Rossman-Benjamin was fed up. She was tired of students telling her they felt unsafe. “Jewish students are in a real bind,” she explained to Aish.com. “They don’t want to walk – they feel unsafe – walking to Shabbat dinner at Hillel or Chabad. The sorority girls (in a traditionally Jewish sorority) were told by their leaders not to wear their letters on sweatshirts during Israel Apartheid Week.” 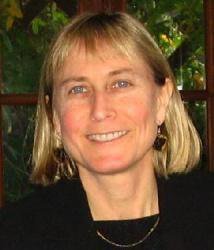 The year before, the Obama administration had expanded the remit of the 1964 Civil Rights Act to include investigating anti-Semitic acts. Ms. Rossman-Benjamin decided to file a Title VI complaint under the Act, alleging “intellectual and emotional harassment and intimidation” of Jewish students. Her complaint included two specific instances: a university-sponsored conference that was “replete with lies, distortions and gross misrepresentations of the facts” about Israel and which called for Israel’s end – and a class taught by a self-described anti-Israel activist who repeated gross lies about Israel, incited hatred against the Jewish state, and encouraged students to protest outside the Israeli consulate in San Francisco.

“As a result of their experiences with such university-sponsored, anti-Semitic expression, Jewish students at my university have expressed feeling emotionally and intellectually harassed and intimidated by their professors, isolated from their fellow students and unfairly treated by administrators. Some have even reported leaving the university, dropping classes, changing fields of study and hiding symbols of their Jewishness,” Ms. Rossman-Benjamin explained at the time.

As a result, “I was attacked and viciously defamed.” 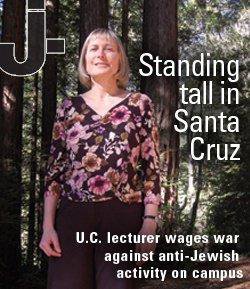 “They really scoured the web to find something they could hang me on,” Ms. Rossman-Benjamin explains. Students for Justice in Palestine found a video of a talk she’d given at a synagogue in Massachusetts. Seeking to explain the nature of anti-Zionism that students experience on campus, Ms. Rossman-Benjamin had pointed out that some student activists hail from countries with state-sponsored anti-Semitism. Students for Justice in Palestine “took this two minute clip and claimed that I was calling all Muslim students terrorists – which I obviously wasn’t….I was really attacked.”

Soon, campus was awash in posters claiming Ms. Rossman-Benjamin called all Muslim students terrorists. Dozens of Youtube videos were made calling for her to be fired. Students at University of California Santa Cruz – and also at Irvine, Davis and Santa Barbara – put forward resolutions calling for her censure.

“It was a nightmare,” Ms. Rossman-Benjamin recalls, noting “It was not directed at me, it was directed at everyone else. Look at what happens at someone who speaks out against us, who speaks out for Jewish students and Israel…. And it was very effective.” Pro-Israel students feared being slandered as well, and, Ms. Rossman-Benjamin recalls, they "stepped back. No one stood by me. Really no one did….It’s very toxic, that label of racist and Islamophobic. And they knew that and it worked well” in damaging her credibility.

(Ms. Rossman-Benjamin is currently on a leave of absence from UC Santa Cruz, and is working on Amcha, an organization she helped found that tracks anti-Semitic incidents on American campuses.)

“I’ve had students where – because they know I’m Jewish – they talk to me. One student was concerned about going on birthright and wondered if they should go because that would have identified them as Jewish,” he recalls. (He encouraged the student to go; they did, and had a very positive experience.)

When UC Santa Cruz voted on boycotting and divesting from Israel in the past two years, Prof. Miller recalls, “I had students and faculty members tell me they felt threatened in the room…. How often do you feel threatened in a debate?” he asks.

After witnessing Jewish students being afraid of going to Hillel, Prof. Miller printed off his “Safe person, safe space” sign and affixed it to his office door. A fellow (Christian) Computer Science professor, Darrell Long, also put up the sign on his office door. Both professors have faced harassment. Prof. Long recalls someone criticizing him for supposedly implying that he wants only Jews to be safe. 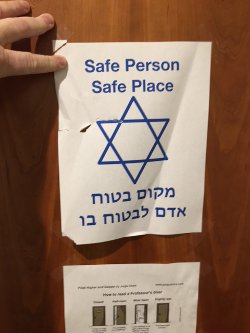 Last Hanukkah, Prof. Miller decided to make a new addition to his office door and affixed a mezuzah. When he came in to put up the mezuzah he noticed that the sign had been torn. There was little official reaction. “Imagine if that had been a ‘Black Lives Matter” sign or related to other minorities Prof. Miller points out; “that would be a big deal. But it’s Jewish so it’s ‘who cares’.”

Given this atmosphere, some Jewish students at Santa Cruz are emboldened, proclaiming their identity loudly. "Hillel is booming,” Prof. Miller notes. A hundred students turn up for Shabbat dinners. But that’s less than a tenth of Jewish students overall. For many, the pervasive anti-Zionism leads students to hide their Jewish identity.