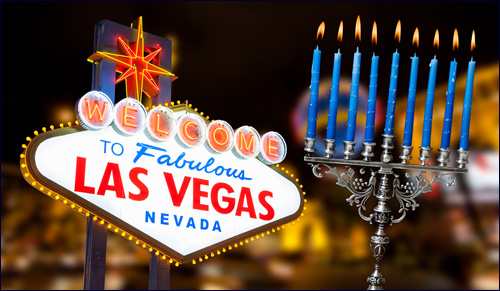 On Hanukkah, we light the Menorah, eat latkes, spin dreidels and gamble for chocolate coins. Such bright lights, fun food and exciting events make me wonder about spending Hanukkah in Las Vegas, which itself is known as the City of Lights. Yes, Vegas is also known as Sin City, but with a little dreidel mania, we could easily “turn” it into Spin City. And yes, Vegas is hot but its overly air-conditioned casinos should keep those little chocolate Hanukkah coins from melting.

Have access to a world class fitness center, including dreidel-appropriate “spin” classes.

So I called my travel agent at Shamash Travel Company and inquired about a Hanukkah getaway package to Vegas. Here’s what I found out:

Flight: Forget about flying Delta, United and JetBlue. During the eight nights of Hanukkah, try flying “JetJew.” Warning #1: On Hanukkah, JetJew offers only eight-stop flights on eight-seater planes and, at each stop, another passenger is picked up until all eight are onboard. And yes, all eight passengers are required to keep their overhead lights shining the entire flight. Warning #2: On Hanukkah, JetJew’s inflight entertainment is limited to episodes of that wholesome 1970’s television show “Eight is Enough.” (Yes, most passengers opt instead to stare at a blank screen.)

Hotel: You’ll be staying right on the Vegas Strip, near famous Vegas hotels like Paris Paris and Circus Circus, at a brand new hotel called Latkes Latkes. This luxury hotel and casino specifically caters to high rollers, or in the case of dreidels, big spinners, especially those who try their luck on the “Jew’lette Wheel. You’ll also have access to a world class fitness center, including a dizzying array of dreidel-appropriate “spin” classes.

Entertainment: Vegas also is known as the “Entertainment Capital of the World” and Hanukkah in Vegas lives up to that moniker. Be prepared for an exciting night out on the town, including Hanukkah-appropriate magic, music and mayhem.

A. Magic: One Jewish magician has a unique, Hanukkah-inspired magic trick during which he tries to mimic the miracle of Hanukkah, i.e., the oil of the Menorah lasting eight straight nights. To pull off this trick, the magician tries to make other things in life miraculously last for eight straight nights, including: (1) the attention span of your average teenager, (2) toleration for eating leftovers, (3) genuine laughter at your spouse’s same old jokes, (4) perfect sibling harmony, (5) willingness to house your in-laws, (6) patience for robo-calls, (7) a child reading a book and (8) the giving of non-pathetic Hanukkah gifts that need not be returned. (Can someone please make an official Hanukkah rule requiring one cool gift rather than eight lame ones?)

Of course, there are some things in life that we certainly do not want to last for eight straight nights, especially (1) childbirth, (2) a Nor’easter, (3) high school reunions, (4) dental visits, (5) parent/teacher conferences, (6) a colicky baby, (7) insomnia and (8) a rabbi’s sermon.

B. Games: Vegas also is known as “America’s Playground” so, fittingly, you will play a bizarre and unforgiving Hanukkah game called “Worst Gift Ever.” It’s basically a Hanukkah grab-bag filled with pathetic presents like: (1) gefilte fish-scented perfume, (2) a kippah with built-in chin straps, (3) an invisible mezuzah, (4) leavened Matzah, (5) an inaudible shofar, (6) hummus-flavored ice cream, (7) a free Shabbat in Tehran and (8) a book graphically explaining exactly how hotdogs are made. (Trust me, some things are better left unread.)

C. Music: Get ready for a Hanukkah-themed Cirque de Soleil experience called “Festival of Lights,” featuring acrobats bouncing on trampolines while juggling jelly doughnuts and eight French contortionist on unicycles who light themselves on fire one at a time. You also will be treated to an epic Hanukkah-themed concert for eight straight nights, including the following Menorah-inspired performances: (1) Elton John – “Candle in the Wind,” (2) Crystal Gayle – “You Light Up My Life,” (3) The Doors – “Light My Fire,” (4) Bruce Springsteen – “I’m on Fire,” (5) Kanye West – “All of the Lights,” (6) The Bangles – “Eternal Flame,” (7) Phil Collins – “One More Night,” and (8) The Beatles – “Eight Days a Week.”

D. Shows: Vegas also features Broadway hits and, on Hanukkah, there is a special production perfect for the holiday. It’s a musical love story about two female candles – one good and one evil – who fight to be “lit up” by a magnificent masculine match. And yes, the two candles sing a duet about finding their bashert (soulmate), with lyrics that they each mean quite literally: “Matchmaker, Matchmaker, make me a match!” At the climax, the evil candle sinisterly cuts off the little string at the top of the good candle. For this reason, the show is called “Wick’ed.

Bottom-line: Even on Hanukkah, the famous expression holds true that “whatever happens in Vegas stays in Vegas” . . . unless you bump into fellow Jews because, as we all know, it’s a very small Jewish world.

The Funniest Jewish Jokes, Part 3
Why Are The Prayers Of Yom Kipur So Repetetive?
Ha'azinu 5783: A Time for Unity!
Twisted Thinking
Comments