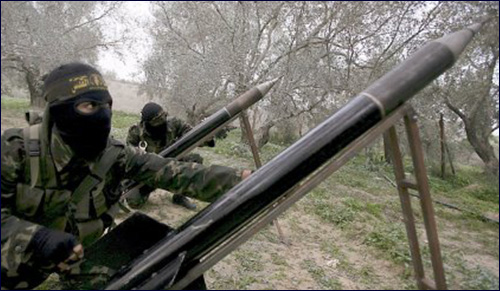 Hamas counts on Jewish compassion to compensate for their weakness.

Much is made of Hamas’s arsenal of weaponry. There appear to be tens of thousands of missiles, untold numbers of tunnels and caches of armaments meant to achieve their charter’s goal of the destruction of Israel and the murder of its inhabitants.

Yet these are not Hamas’s most powerful weapon.

The secret weapon of Hamas has an ancient history. Its source is biblical. And it has its roots in the very first murder of record.

The Torah tells us that at mankind’s very beginning rivalry between brothers escalated to killing. The text does not make clear what motivated Cain to kill Abel. The Midrash suggests that he felt the world simply wasn’t big enough for both of them. Coexistence was impossible. And so one day Cain pounced. He was certain that the element of surprise would allow him to easily accomplish his goal.

But that didn’t happen.

The story as it appears in the Bible is sparse on details. It is the genius of Jewish commentators that fleshes out the details by carefully analyzing the text.

“And Cain rose up against Abel his brother, and slew him” (Genesis 4: 8). The Hebrew word translated as “rose up” suggests a physical movement with great significance. Cain had to rise up because he was on the ground. According to Jewish tradition, Abel was stronger than his brother. Attacked without cause, Abel defended himself so well that he shortly had his sibling in his power, helpless underneath him. Here the story should have ended. But that was the moment when Cain decided to make use of his powerful secret weapon.

In what appears to be a most perplexing verse the Torah tells us “And Cain said to Abel his brother” – and doesn’t complete the phrase! In the midst of this battle, with the attack seemingly foiled, Cain says something that alters the dynamics of the situation and allows him ultimately to achieve his nefarious plan of murder.

What could he possibly have said? What moved Abel to let go of the brother who by now it was clear meant him serious harm? For the Torah not to share with the reader this all important information seems highly unreasonable.

The answer stares us in the face. What Cain said to Abel was simply that he was his brother! It was a plea for mercy he knew Abel would be powerless to resist. Like you, Cain pleaded, “I too am a child of God. We are both human beings who share the divine image. Yes, it is true that I just attempted to kill you – but you, with your higher sense of morality and your greater closeness to God, can’t possibly become guilty of the same crime.”

Cain’s secret weapon was Abel’s sense of compassion. And when Abel was persuaded to permit compassion to overwhelm reason he sowed the seeds of his own subsequent death.

When the stronger allows the weaker the upper hand in spite of his assailant’s clear intention to kill him and he dies, the result isn’t simply murder – it is also a form of suicide.

That is why biblical law made it mandatory to set boundaries for mercy. In Talmudic law, those intent on murder lose their right to life. Based on Exodus 22:1, the case of the thief who breaks into a home prepared to kill its occupants if necessary, the Talmud says: “He who comes to slay you, rise up early to kill him.”

How much more so is this true in the context of war. Yes, war is hell. Innocents die and civilians suffer. Yet the generation before us that successfully fought to save civilization from the barbaric goals of the Nazi Third Reich rightfully deserves the encomium of “the greatest generation” in spite of the unfortunate deaths of the enemy required for victory.

Like Cain of old, Hamas counts on Jewish kindheartedness to compensate for their weakness. They know the Achilles’ heel of the Jewish people is their inability to cope with the pain of others, even at their own cost. And so Hamas indiscriminately shoots missiles into Israeli cities filled with civilians, knowing full well the Israeli response will be accompanied by warnings and kept far from the mosques, schools and heavily occupied homes in which their armaments are hidden.

Israel is the devil for Hamas except when a Palestinian leader or one of his or her family members needs emergency medical care. In Nov., 2013, Amal Haniyeh, granddaughter of Gaza-based Hamas Prime Minister Ismail Haniyeh, deteriorated to critical condition after contracting an acute infection of her digestive tract. Without hesitation, Haniyeh sent the one year old girl to Israel for treatment, and the Jewish state, equally without hesitation, opened its arms to help the child. Similarly, in the summer of 2012, Haniyeh's brother-in-law was rushed across the border to receive urgent heart treatment at a hospital near Tel Aviv.

Seventy thousand Gazans from Khan Younis and Deir el-Balah were in the dark Sunday night after a Hamas rocket destined for Israel hit the power line that supplies electricity to those places. With rockets flying, the Israel Electric Company sends in a repair crew – in spite of the fact that Gaza alone, it is estimated, owes the Israel Electric Corporation NIS 220 million (out of the staggering NIS1.5 billion of unpaid Palestinian debts). After all, innocent people shouldn’t suffer.

In the history of modern warfare, there is no country who has acted with as much concern for the lives of innocent civilians as Israel.

Israeli missions against terrorist leaders are aborted when it appears that the price includes the death of civilians. Hamas’s secret weapon – awareness of Israel’s innate identification with the response of Abel to his weaker brother’s murderous plan – is what has given them the courage to reject any cease-fire agreement.

In the history of modern warfare, there is no country who has acted with as much concern for the lives of innocent civilians as Israel. It is an exemplary trait. At the same time we cannot allow our compassion to become an obstacle to fight our enemy who is trying to kill us, and endanger innocent Israeli lives. Hamas knows our weakness. Let us have the strength to differentiate between protecting innocent civilians (which we must do) and removing the threat of those who are rising up to kill us (which we also must do).

When God Moved Out
How to Become Immortal
Judaism and Mental Health
Jews and the Chocolate Trade
Comments
MOST POPULAR IN Israel
Our privacy policy
Aish.com Is Looking for Great Writers