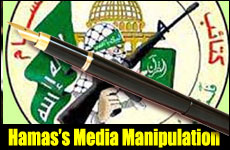 Hamas knows it can't destroy Israel militarily so it tries to do so through the media.

What makes better headlines? Is it numbing figures such as the 8,000 Palestinian rockets fired at Israel since it unilaterally withdrew from Gaza in 2005, and the 42.5 percent of Israeli children living near the Gaza border who suffer from post-traumatic stress disorder? Or is it high-resolution images of bombed-out buildings in Gaza and emotional stories of bereaved Palestinians? The last, obviously, as demonstrated by much of the media coverage of Israel’s recent operation against Hamas. But that answer raises a more fundamental question: Which stories best serve the terrorists’ interest?

Hamas has a military strategy to paralyze southern Israel with short- and middle-range rockets while launching Iranian-made missiles at Tel Aviv. With our precision air force, top-notch intelligence and committed citizens army, we can defend ourselves against these dangers. We have invested billions of dollars in bomb shelters and early-warning systems and, together with generous U.S. aid, have developed history’s most advanced, multi-layered anti-missile batteries. For all of its bluster, Hamas does not threaten Israel’s existence.

Its purpose is to pervert Israel’s rightful acts of self-defense into war crimes.

But Hamas also has a media strategy. Its purpose is to portray Israel’s unparalleled efforts to minimize civilian casualties in Gaza as indiscriminate firing at women and children, to pervert Israel’s rightful acts of self-defense into war crimes. Its goals are to isolate Israel internationally, to tie its hands from striking back at those trying to kill our citizens and to delegitimize the Jewish State. Hamas knows that it cannot destroy us militarily but believes that it might do so through the media.

One reason is the enlarged images of destruction and civilian casualties in Gaza that dominated the front pages of U.S. publications. During this operation, The Post published multiple front-page photographs of Palestinian suffering. The New York Times even juxtaposed a photograph of the funeral of Hamas commander Ahmed Jabari, who was responsible for the slaughter of dozens of innocent Israelis, with that of a pregnant Israeli mother murdered by Hamas. Other photos, supplied by the terrorists and picked up by the press, identified children killed by Syrian forces or even by Hamas itself as victims of Israeli strikes.

In reporting Palestinian deaths, media routinely failed to note that roughly half were terrorists and that such a ratio is exceedingly low by modern military standards – much lower, for example, than the NATO campaign in the Balkans. Media also emphasize the disparity between the number of Palestinian and Israeli deaths, as though Israel should be penalized for investing billions of dollars in civil-defense and early-warning systems and Hamas exonerated for investing in bombs rather than bomb shelters. As in Israel’s last campaign against Hamas in 2008-09, the word “disproportionality” has been frequently used to characterize Israeli military strikes. In fact, during Operation Pillar of Defense this year, Hamas fired more than 1,500 missiles at Israel and the Israeli Air Force responded with 1,500 sorties.

The imbalance is also of language. “Hamas health officials said 45 had been killed and 385 wounded,” the Times’ front page reported. “Three Israeli civilians have died and 63 have been injured.” The subtext is clear: Israel targets Palestinians, and Israelis merely die.

The media perpetuated Hamas propaganda that traced the fighting to Jabari’s elimination and described Gaza as the most densely populated area on earth. Widely forgotten were the 130 rockets fired at Israel in the weeks before Jabari’s demise. For the record, Tel Aviv’s population is twice as dense as Gaza’s.

Hamas is a flagrantly anti-democratic, anti-Semitic, anti-Christian, anti-feminist and anti-gay movement dedicated to genocide. The United States, Canada and the European Union all consider it a terrorist organization. Hamas strives to kill the maximum number of Israeli civilians while using its own population as a human shield – under international law, a double war crime. Why, then, would the same free press that Hamas silences help advance its strategy?

Media naturally gravitate toward dramatic and highly visual stories. Reports of 5.5 million Israelis gathered nightly in bomb shelters scarcely compete with the Palestinian father interviewed after losing his son. Both are, of course, newsworthy, but the first tells a more complete story while the second stirs emotions.

This is precisely what Hamas wants. It seeks to instill a visceral disgust for any Israeli act of self-defense, even one taken after years of unprovoked aggression.

Hamas strives to replace the tens of thousands of phone calls and text messages Israel sent to Palestinian civilians, warning them to leave combat zones, with lurid images of Palestinian suffering. If Hamas cannot win the war, it wants to win the story of the war.

Veteran journalist Marvin Kalb, writing for Harvard’s Kennedy School of Government on the terrorists’ successful media strategy against Israel, warned that “the trajectory of the media, from objective observer to fiery advocate,” had become “a weapon of modern warfare.” Kalb quotes a U.S. military expert who describes how perception has replaced reality on the battlefield and that the terrorists know it.

Israel will take all legitimate steps necessary to defend our citizens. We know that, despite our most painstaking efforts, tragic stories can emerge – stories that the enemy sensationalizes.

Like Americans, we cherish a free press, but unlike the terrorists, we are not looking for headlines. Our hope is that media resist the temptation to give them what they want.

Turning A Blind Eye to Murder
The Promise Of The Land
Which Chat Are You On?: Parshas Behar/Lag Ba’Omer
Do You Like Slow-Cooked Food? Thank the Jews
Comments
MOST POPULAR IN Media Objectivity
Our privacy policy