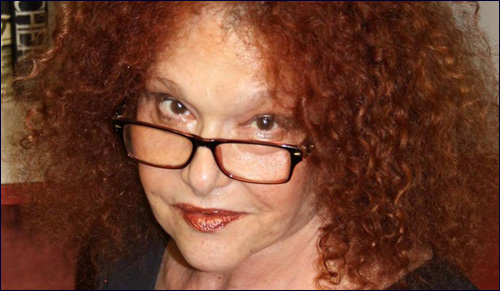 I’ve updated my author photo. Curls and all.

Yup. I did it. I changed my photo in the “About the Author” section below. Now, that might not seem like a big deal to you, but I’d rather stick bamboo shoots under my fingernails. Why? Because I photograph like an aging Jewish Medusa. Kramer, on Seinfeld could make “fusilli Marnie” from me.

However, I started getting email from those who’ve met me, radically offended that I’d have the chutzpah to use a picture that was taken shortly after I was potty trained. Given that I feel the age of the old photo, I was offended. I mean how superficial can one get? Wait … could I be the offender?

I’ve spent more time, money, and “weapons” in the Holy Hair War than the war on terrorism.

So, not wanting to spend money on a pro, I tried myself. Let’s say “selfies” aren’t my thing. When friends – nice ones saw my efforts, they gingerly suggested I sell an organ to get a professional to shoot me. (Or they would.)

Onto the Medusa thing. Yes, I know we all have “bad-hair” days. But when you’re a Boomer born with spirals, chances are high that you’ve had more than a few bad hair days – you’ve probably had a bad hair life. Now to be fair, not all Jewish maidels are born frizzed. In fact my bff, Lynda, has hair that puts Wonder Woman to shame. But, face it. More of us carry the FDNA (Fusilli DNA) than say, a Swede. Trust me. It hasn’t been easy.

When my son was young, he would naively ask: “Mom, can’t you do something about your hair?”

“What do you suggest?” I asked, reaching for a meat cleaver.

“Can’t you try to make it look like everyone else’s?”

Where has this child been his whole life?

In the days when “beauty” meant your hair was in a perfect bubble, with accessories to match, hadn’t he noticed that “Mom” considered two pairs of old sawed-off bell bottoms a wardrobe and ten minutes in the tub with a glass of Snapple, a cruise -- all because my entire personal budget was spent on “trying?”

You could open any drawer in my house, never mind the fridge, and find stuff like “Curl Begone,” “Frizz Zapper,” “Yak Placenta,” “Straight Up,” along with odd appliances, including beer can curlers, and enough crazy wigs to supply every Clown College in the U.S. Some of these “inventions” would make Mr. Wonderful on “Shark Tank” scream “You’re dead to me!”

It got so bad, my loved ones had an intervention, after which I was to join a support group for “Hair Abuse.”

Back then, being “curled” invited local terrorism. Beauty parlors, as they were called before they became “Unisex Salons” in toney spas that also offer eyelashes longer than the Columbian Black Tarantula, banned me. Every single hairdresser sighed, and suggested Lourdes. No matter what they did, after five minutes my determined locks, like wayward macaroni “soldiers,” would break training, revolt, and go “Boing!”

I suffered all this … to look like “everybody else.”

Finally, the seventies set me free! We kinky kids made treaties with our tresses. I let my corkscrews fly free at last!

Suddenly, the same critics who suggested freeze-drying the frizz were saying in wonderment: “Wow! Is that natural ...?”

“Would I do this to myself on purpose?!” I replied, in shock. (Old neuroses die hard.)

“Do you know how lucky you are?” they said, launching into a blow-by-blow of all the fortunes and hours they spent on perms, hot rollers, “Curly Girl” and a massive collection of gels, mousses, glop, along with 20 curling irons.

“Yes!” I thought. Now it’s your turn to spray and shpritz! Your turn to get migraines from wiglets, and scalp burn that rivals Three Mile Island, so you can “look like everybody else!”

True, there were still some naysayers who thought I looked like a meshuggah flower child, but I was free at last! And as the years passed, my curls became me. They always were me. And I can’t imagine “straightening” or blow drying for hours. Of course today, my son likes it. “Real” mom has emerged who “looks like [many] other Jewish moms.”

More, I’ve freed my cabinets and fridge. I now have cold milk and my medicine chest consists of “youthenizing” vitamins. (Yeah, still with the Yak cream.) My hair? I wash, cream rinse, pick out my curls … period. It’s heaven.

Until I recently heard Patti Stanger, “The Millionaire Matchmaker,” comment, and I’m paraphrasing: “Men don’t like women with curly hair.” On behalf of the coiled, I protest, that’s simply not true. Besides, I think it’s important to note that Patti is 54, and despite her long straight black hair, isn’t married.

The point, like it or not … I am thrilled to post an accurate photo … age, curls and all. After all, We Jews who love jewlarious.com are like family, and I thought it was only right that you see the true corkscrew maidel who scribbles for you.