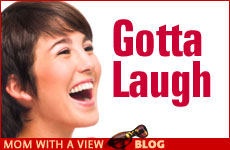 Life requires a sense of humor.

My married children were visiting during their summer break. As young couples living in Israel are wont to do when they come to America, they stocked up on groceries. One of their treasured items was a large bottle of pure vanilla extract (a commodity very difficult to find in Israel and, as all you cooks know, impossible to replace with that awful imitation stuff!). In fact, the whole time they were here, my daughter kept repeating the refrain: “I have to buy vanilla.”

Anticipating a freezer soon to be stocked with freshly baked goodies, she excitedly packed the vanilla for the trip – in her carry-on bag. Yes, it was a klutzy thing to. Yes, it was probably due to waiting until the last minute to pack. Yes, that’s what happens when you finish packing at 3 a.m. But we’ve all been there…(I’m still mourning some confiscated custard from a few summers ago!).

We had a tearful farewell at the airport and they made their way to security, blissfully unaware of what was about to transpire. When their carry-on bag was x-rayed, an alert TSA agent spotted the dangerous substance and immediately removed that bottle of vanilla from their bag. And my daughter did the only thing possible at the moment – she burst into tears!

Her husband, less tearful and very resourceful, thought quickly. He ran to one of the airport shops and bought a cosmetic bag filled with the approved-size bottles. They then proceeded to empty the large bottle of vanilla into the numerous smaller ones (now that’s using your yiddishe kop!). Now they were able to waltz through security unimpeded. (How absurd is that?}

What’s the message here? (There really isn’t one, but the story was too good not to tell!)

Actually I think there are a few lessons here about how to react to situations – in the specific and in the general. I’m only going to focus on one (and spare my daughter further embarrassment but avoiding discussion of how not to react!).

“Gotta laugh.” Life requires, nay demands, a sense of humor. It’s not a luxury; it’s mandatory. There are many challenges and absurdities that can only be met with humor. Well, I guess they could be met with anger, frustration and other destructive behaviors but this is the healthy response.

When you’re up in the middle of the night, changing sheet after sheet, mopping floor after floor because the stomach flu is roaring through your house, you need your sense of humor (as long you don’t also have the flu!).

When your garbage disposal, washing machine and oven all break down erev Yom Tov (we’re one out of three right now), you need your sense of humor.

When you come home from your daughter’s wedding to discover that someone has been forging large checks on your account and the fraud department couldn’t reach you because you were busy dancing (!), you need your sense of humor.

I could go on. Humor gives us perspective. “In the grand scheme of things…” It takes us out of ourselves and our petty obsessions.

We need to cultivate our sense of humor. We need to train our children to develop theirs. We need to access it during some of our trying times. Humor saves marriages, jobs, parent-child relationships. It may be that “Laughter is the best medicine.” It is certainly true that the Almighty has given it to us for a reason, to use productively. And that, like all character traits, it’s worth developing to its full potential.

My Amazing Payback for Keeping My Big Mouth Shut

You Can’t Have it All

You Can't Always Get What You Want

Telling Israel What She Should Do