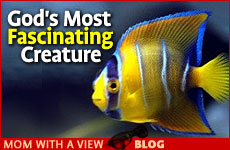 Who needs reality TV? Just look around you.

“It’s just after dawn at the Dogfish Head brewpub in Rehoboth Beach Delaware, where the ambition for the morning is to resurrect an Egyptian ale whose recipe dates back several hundred centuries.”

This is the beginning of an article in the August issue of Smithsonian magazine. To accomplish this goal, they consult with Patrick McGovern, a 66 year-old archaeologist and adjunct professor at the University of Pennsylvania.

"'Dr. Pat,' as he’s known at Dogfish Head, is the word’s foremost expert on ancient fermented beverages…” Now that’s an unusual honorific. While other boys dreamed of being firemen and garbage collectors, was Dr. McGovern entertaining fantasies about historic beers? But no matter. What really struck me here is the tremendous variety of people in the world and the interests that excite them.

I love going to aquariums. I’m always amazed by the colors, sizes and shapes of the different fish. It’s awe-inspiring to see what a complex and beautiful underwater world the Almighty has created. I’m like the proverbial kid in the candy shop running from tank to tank and calling out to my kids (who feign interest and roll their eyes) and my husband (who’s more polite) to look at this one…and this one…and that one over there.

And that’s nothing compared to people. People are the most fascinating creatures of all. My husband always enjoys waiting for our kids at the airport because of all the people-watching you can do (talk about finding the silver lining in all that schlepping!). As we wait for our children to descend the escalator at LAX, we can stand and stare at everyone else, without any sense of self-consciousness whatsoever. After all, we’re just watching for our family. The variety of shapes, sizes and facial expressions among human beings far surpasses that of the aforementioned fish (particularly the facial expressions!).

There is really nothing more awesome than people. And that’s just their physical appearance.

When you begin to delve into their personalities, their goals, their interests, their psyches (well, I’m not sure we want to go there!), the diversity is even more dramatic. Everyone has a story to tell, an interesting narrative if we just give them the time and attention. And each individual has unique areas of interest and passion.

At the aquariums there are people who have devoted their lives to studying fish, sharks, whales…you name it. At the zoo, there are those whose interest is the gorillas, the polar bears, the lions, the giraffes…And what about the huge variety of bugs? There are reputedly 400,000 species of beetles alone. Not beautiful but certainly compelling. How about all the plants and flowers? The solar system? Watching the lift-off of the final Shuttle mission, I thought about everyone at NASA – the engineers, astronauts, scientists…And of course there are also the less glamorous occupations. I went online to see what has been feature on the show “Dirty Jobs”. The most dramatic listed was the “Owl Vomit Collector”. Don’t ask. I know there are special dentists for large animals like moose. There are charcoal makers, sewage plant workers and coal miners. The list, as they say, is truly endless.

We have a constant commandment to know there is a God. Maimonides suggests that just looking around at the both the order and awesomeness of the natural world should be enough to provoke that recognition. And it is. But nothing illustrates the Almighty’s hand more than His ultimate creation – us.

So take a break. Go sit in a coffee shop and watch the crowds. You don’t need an isolated mountaintop to experience awe. Try to meet as many people as you can from as many different walks of life as possible. Most of us limit ourselves to a narrow world of like-minded people (who, it must be noted, are also fascinating!). Talk to them, ask them questions, listen to their bios. We were once seated at a Bar Mitzvah next to someone who works with his dog to rescue mountain climbers who get trapped or stuck in the Canadian Rockies. Amazing. I guess that’s part of the appeal of Reality TV. But who needs television when, at almost every moment, we have the opportunity to observe live or even speak directly to the Almighty’s most fascinating creature of all?

My Lack of Control

Bat Mitzvah Hoopla
The Blue Beyond
Great Place to Live
Is Eating Supposed To Be Spiritual?
Comments
MOST POPULAR IN Family
Our privacy policy