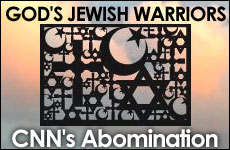 The first part of the series is one of the most grossly distorted programs to appear on mainstream American television in many years.

CNN's "God's Warriors," hosted by Christiane Amanpour, is a three-part series intended to examine the growing role of religious fundamentalism in today's world. Unfortunately, the first program in the series, "God's Jewish Warriors," is one of the most grossly distorted programs to appear on mainstream American television in many years. It is false in its basic premise, established in the opening scene in which Jewish (and Christian) religious fervency is equated with that of Muslims heard endorsing "martyrdom," or suicide-killing. There is, of course, no counterpart among Jews and Christians to the violent jihadist Muslim campaigns underway across the globe, either in numbers of perpetrators engaged or in the magnitude of death and destruction wrought.

While in reality Jewish "terrorism" is virtually non-existent, the program magnifies at length the few instances of violence or attempted violence by religiously-motivated Jewish individuals - including having to go all the way back to 1980, for example, to explore a bombing campaign against West Bank Arab mayors by a small group of Israeli Jews. In dredging up such an old incident Amanpour unintentionally undermines her own thesis.

And, of course, on the exceedingly rare occasions when Israeli Jews commit terrorist acts, the Israeli public and leadership condemns the act and the perpetrators. Prime Minister Rabin, for example, condemned Baruch Goldstein's terrorist attack in Hebron, terming it "a loathsome, criminal act of murder." In contrast, Palestinian suicide bombers who target Israelis are regarded as "martyrs" and become celebrities, with soccer tournaments named after them. Amanpour, of course, fails to inform her audience of this key difference.

Of much more interest to Amanpour are settlements, which are a key focus of the program, their residents and adherents being deemed "God's warriors" – along with those Americans, Jewish and Christian alike, who support them. American presidents and Members of Congress are said to be held hostage to the so-called "Israel Lobby," ostensibly dark forces consisting of AIPAC and other pro-Israel groups who supposedly enable the nefarious expansion of West Bank communities.

Disproportionate reliance on partisan voices, some extreme figures, skews the message dramatically. Jimmy Carter and John Mearsheimer, chief proponents of the discredited canards about Jews subverting American national interests to those of Israel, are repeatedly and respectfully interviewed. Carter, for example, claims that no American politician could survive politically while calling for settlement-related aid cuts to Israel: "There's no way that a member of Congress would ever vote for that and hope to be re-elected."

Amanpour ignores all this, and turns instead to former Senator Charles Percy, who joins in denouncing Jewish political influence. Only Morris Amitay is presented as balance on this critical issue.

Whether wittingly or not, Amanpour's program, with its reliance on pejorative labeling, generalities, testimonials, and a stacked lineup of guests, is a perfect illustration of classical propaganda techniques. Unfortunately propaganda is the opposite of journalism, the profession Amanpour is supposed to practice.

The program was misleading and inaccurate in many other ways as well:

Amanpour says: "But it is also Palestinian land. The West Bank - it's west of the Jordan River - was designated by the United Nations to be the largest part of an Arab state."

This is highly deceptive. The United Nations 1947 Partition Plan proposed dividing all the land west of the Jordan into a Jewish and an Arab state; the Arabs rejected the plan, choosing instead to launch a war to eliminate Israel. The land did not become "Palestinian land" via this UN Plan. Likewise, UN Security Council Resolution 242, passed after the Six Day War, underscored that territorial adjustments related to the West Bank were to be expected.

She presents at length the views of Theodor Meron asserting the illegality of settlements as the definitive word, but makes no mention of more senior Israeli experts such as former Supreme Court Chief Meir Shamgar, who disagreed with Meron. Nor does Amanpour mention such foreign experts such as Professors Julius Stone and Eugene Rostow who also argued for the legality of settlements. (See for example and From "Occupied Territories" to "Disputed Territories" by Dore Gold.)

She grossly misleads about America's position on settlements in the following sequence:

AMANPOUR: From the earliest days of the settler movement, even the United States, Israel's closest ally, blasted Israel's settlement policy.

SCRANTON: Substantial resettlement of the Israeli civilian population in occupied territories, including East Jerusalem, is illegal.

AMANPOUR: Ever since American presidents both Democrat and Republican have spoken from virtually the same script. They consistently oppose settlement growth.

RONALD REAGAN, FORMER PRESIDENT: The United States will not support the use of any additional land for the purpose of settlements.

In fact, while the Carter administration did deem settlements illegal, President Reagan very much did not speak from the "same script." He explained: "As to the West Bank, I believe the settlements there — I disagreed when the previous Administration referred to them as illegal, they're not illegal" (NYTimes, Feb. 3, 1981). Other presidents, including Bill Clinton and George W. Bush, also did not term settlements "illegal."

Amanpour does not discuss Jewish habitation in the West Bank and Gaza in post-Biblical times, before 1948—for example, in Hebron, Kfar Etzion, Kfar Darom (See: CAMERA BACKGROUNDER: The Debate About Settlements) but instead portrays Jewish settlement in the West Bank as an encroachment on "Arab" land—repeatedly referring to disputed territories as "Arab" or "occupied" land (22 times throughout the program).

Amanpour continuously discounts the context of the Arab world. She says with regard to the post Six-Day War period: "But the Israeli government was divided - trade the captured land for peace or keep it and build Jewish settlements." Unmentioned is the Arab refusal after the Six-Day War to "trade" anything for peace, as embodied in the three "no's" delivered by Arab leaders at a summit in Khartoum in September 1967, declaring there would be no negotiation, no recognition and no peace with Israel.

Jerusalem/Temple Mount, and The Holy Places

Amanpour says: "It was from here, according to Muslim scripture, that the Prophet Mohammed ascended to heaven around the year 630. But Hebrew scripture puts the ancient Jewish Temple in the same location, destroyed by the Romans in the year 70. For the next 1,900 years, even the last remnant of the temple known as the Wailing Wall, or the Western Wall, was lost to the Jews."

Amanpour ignores the devastation of the Jewish Quarter of the Old City and the expulsion of its residents by the Jordanians in 1948, as she does the Jordanian destruction and desecration of synagogues and cemeteries in eastern Jerusalem .Nor does she discuss the denial of Jewish access to holy sites and restriction of Christian religious freedom after Jordan's illegal annexation of eastern Jerusalem in 1950. Instead she redefines the history of the conflict over Jerusalem with a new timeline, alleging, "the 40-year tug of war over Jerusalem began when Israel bulldozed the Arab neighborhood next to the Western Wall and built a plaza where Jews now pray."

Amanpour states: " Most recently, former President Carter was criticized for criticizing Israel's treatment of the Palestinians. In his book, "Palestine: Peace, not Apartheid."

Carter was, of course, "criticized" for purveying multiple false statements about Israel and the Palestinians. See, for example, A Comprehensive Collection of Jimmy Carter's Errors.

Professor John Mearsheimer is also invited on to explain to viewers the allegedly pernicious effects of the "Jewish Lobby," with no mention by Amanpour of the extremely serious flaws that critics have identified in Mearsheimer's work..

Amanpour also grossly misleads the public about a dispute in the early 1990s between then president George Bush and Israel's prime minister at the time, Yitzhak Shamir. President Bush decided to withhold American loan guarantees to Israel unless that country froze settlement activity. In CNN's version of events, the Israel lobby kicked into gear, and "Congress got the message." (For Amanpour, it seems, it is a given that members of Congress were responding to "the message" sent by the lobby as opposed to acting on their own convictions.) Then, "just a few months later, the very week of the Republican National Convention, the pro-Israel lobby had something to celebrate." President Bush announced his support for the loan guarantees. Clearly, according to Amanpour, the lobby forced Bush's hand.

What is absent from Amanpour's version of events is the reason why the Bush administration eventually reversed its position. A new Israeli government, willing to compromise on the issue of settlements, had come to power. The new prime minister, Yitzhak Rabin, backed down from previous Israeli Prime Minister Shamir's positions by promising to curtail settlement growth. Israeli-American relations subsequently improved.

In addition, Amanpour uses inflammatory language unbecoming of a journalist to describe fundraising efforts by American Jews to help Israeli settlers. Not only does she take sides in the dispute over the legality of the settlements, she evokes negative stereotypes, stating:

Six thousand miles from Israel's settlements, in the heart of Manhattan, defiance of international law comes dressed in diamonds.

Interviewed by Amanpour, Gershom Gorenberg states: "You can't understand the anger of radical Islam unless you understand the conflict between you know, the Jews and the Palestinians." The false implication is that such "anger" is primarily rooted in the Israeli-Palestinian issue, disregarding the far greater forces driving radical Islam, including the titanic struggle between Shiites and Sunnis triggered in large measure by the overthrow of the Shah of Iran, the Khomenist revolution and the expansion of Saudi Wahabism, Saudi-sponsored mosques and schools built all over the globe inculcate vast numbers of Muslims with extreme, supremacist views.

As even the Ayatollah Khomeini put it, the United States was the "Great Satan," while Israel was only the "Small Satan."

And of course, the rise of the Internet and satellite TV has greatly amplified the false and misleading information put out by Muslim supremacist propagandists, inflaming the Muslim masses.

You can reach CNN's online comments page by clicking here.

Winds of Change at CNN

Shame on the CBC