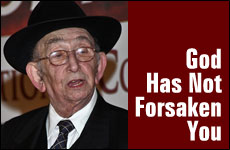 Along with the horrors of the Holocaust, we must never forget the courage and unwavering faith.

Mr. Joseph Friedenson passed away on the Shabbat right before Purim, known as Shabbat Zachor, the Sabbath of Remembrance when we remember what the Amalek did to the Jewish People. How fitting, for my Zeidy, who endured many years of suffering at the hands of the Nazis, dedicated his life to sharing his memories of those times. But these were never bitter memories. (Although he was my wife's biological Zeidy, I had the privilege to form such a close relationship with him that I refer to him as my Zeidy too.) 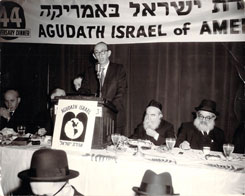 Yossel Friedenson was born in Lodz, Poland. As a teenager he attended the illustrious Yeshivas Chachmei Lublin until the war broke out in 1939. He and his family were sent to the Warsaw Ghetto in 1941. His wife-to-be, Gittel Leah, was smuggled into the ghetto so that they could marry.

Zeidy came from a prominent family. His father, Eliezer Gershon Friedenson, was one of the founding partners of the Bais Yaakov Movement with Sara Schneirer.

A stalwart activist for Agudath Israel, Zeidy continued his work in the United States in 1951. Most notably, he was the founding editor of Dos Yiddishe Vort, a Yiddish Monthly Newspaper. As the Yiddish-speaking community dwindled, he found himself writing most of the paper in the later years. He held this position until the day he died. 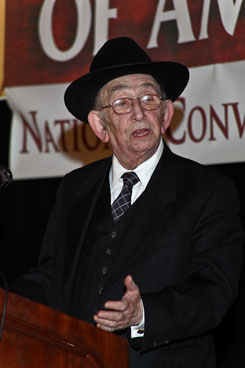 He had the unique talent of speaking German and Polish, extremely unique for a Chassidic Jew from Lodz. It was a very useful tool for his survival in the camps as it gave him a use to the Nazis. He told us how before one Passover in Starchowitz, a slave labor camp, he was able to negotiate some extra flour from the kitchen and they were able to bake matzah. When the camp commandant walked in and saw them eating the matzah, he yelled at him, “Friedenson, fres broidt - eat bread! Don’t eat these crackers – they won’t give you any nourishment at all. What are these crackers?”

After explaining to him that it was Passover and Jews are forbidden to eat bread, the Commandant became furious. “Your God has forsaken you and you still believe in Him?! You still eat these crackers just because He told you? Your God has completely abandoned you, don’t you see that?”

The Commandant seemed to have stumped the entire group; they recognized the dire situation that they were in. While he was struggling to find an answer, a Jew named Akiva Goldschtof piped up. “No,” he said. “God has not totally forsaken us. It is true that God has temporarily put us in this situation, but not totally and not forever.” Zeidy said that those words resonated with the camp inmates until they were transferred to Auschwitz in 1944.

Before leaving Starchowitz, while the group was passing through the doors on their way to Auschwitz, a German soldier named Bruno Papa turned to my Zeidy and said, “Friedenson, don’t you remember what Goldschtof said: ‘Not totally and not forever’? You guys will be fine. Your God will take care of you.” Zeidy would point out that it was apparent even to the German guard during those times of horror and hopelessness that the Jewish people are indestructible. 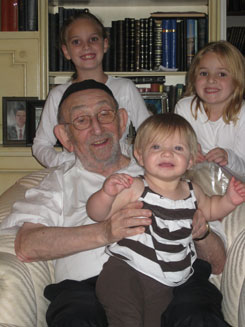 Mr. Friedenson with some of
his great-grandchildren.

Instead of focusing on the unimaginable hell and suffering of the Holocaust, Zeidy made the point of telling young generations other facets that were all too often left undiscussed: Divine Providence and the promise of Jewish eternity, their relatives’ heroic dedication to perform mitzvot despite risking their lives, their grandparents’ indestructible faith and courage.

Zeidy lived with one slogan: "Ver hut gechulemt" – “who would have dreamed…” When a new great grandchild was born, or a grandchild finished a tractate of Talmud, or when they stood up proudly to ask the “Four Questions” on the Seder night, this was the expression on his face.  “Who would have dreamed when we pulled up to Auschwitz on Tisha B'Av, 1944 that we would live to see this.” He sat and smiled as if each of these occasions were his own private revenge on Hitler and the Nazis.

He sat and smiled as if each of these occasions were his own private revenge on Hitler and the Nazis.

My favorite memory occurred a few years ago while sitting around the Shabbat table. We were singing old Chasidic classics from the many pre-war dynasties. Suddenly he stopped and said, “I just remembered a story that I never told anyone.”

He said that in the camps there was a Chassidic Jew named Meilich Rubenson who would make a melave malka, a meal after Shabbat every Saturday night. “This meal didn’t include any food – there was no food to be had. It consisted of singing. Rubenson would gather a group of Jews together and we would sing this song: ‘God said to Jacob, don't fear my servant. Have no fear my servant, Jacob. I fear no one but you Hashem...’ It was laughable, a joke! Everyone knew that the Germans were winning the war and there was very little hope for us, if any. But this Jew, with his singing and faith, gave strength and hope to all the Jews in the camp. It gave us the strength to go on."

We all cried – not bitter tears, but tears of joy, tears of hope, tears that tell the story of our people through thousands of years of pain and suffering and yet, here we are, still going strong.

The next day after he related this story, he was invited to speak in a shul in Rockland County, New York. It was three days before Tisha B'Av, a most appropriate time for him to speak to the younger generation about his experiences. I urged him to tell this story he just remembered. "Zeidy, don't just say the story – sing the song." And he did. While the audience sobbed, two young men stood up and said, "We are Meilich Rubenson's grandchildren. Thank you for sharing that incredible story about our zeidy. We had never heard it.”

May his lifelong work of disseminating this message continue to be a merit for him, his family and for the entire Jewish nation.

Rabbi Yossie Friedman is the Managing Director of Project Inspire

Jewish Woman Photographing Resistance Fighters
It Takes A Lot Of Faith To Be An Atheist
How Instagram Brought Back This Nostalgic Soup
What Makes Eli Run?
Comments
MOST POPULAR IN Holocaust Studies
Our privacy policy