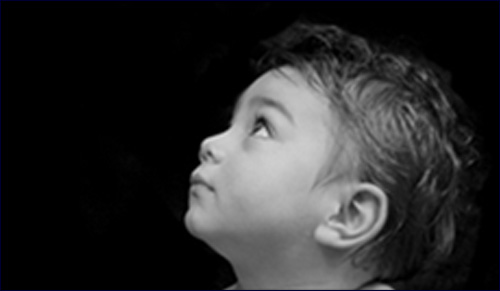 God gives me what I need, not what I want.

Today, in the course of a conversation, I heard this truly profound statement: “God doesn't always give me what I want. But He always gives me what I need.”

I thought about that statement long and hard, turning it over in my mind. And I began to appreciate the inner wisdom it contains.

I thought about it as I refused my daughter's request for a piece of cake before bedtime, much to her chagrin.

I thought about it as I steered my unwilling three-year-old in the direction of the bathroom, despite his insistence that he didn't need to go.

I thought about it as I fought back laughter and pretended to be stern, warning my adorable baby never to climb on the table again.

He gives me what I need, not what I want.

While I have always connected with the idea of God being my Father, His essence has become so much more wondrous to me since I became a parent. God created the parent-child paradigm to serve as a basis for His relationship with His children, and that is a tangible touchstone for me. If I, as a parent, take care to give my children what they need - instead of what they want -- surely I can accept that God, my Father, treats me in the same way. And when I cannot accept that God does what's best for me, I am like the petulant child, throwing a tantrum after not getting her way.

Yet luckily, unlike a parent, God's decisions are perfect, crafted in His infinite wisdom. Certainly a far cry from the parent whose decision-making skills are largely culled from various books and life lessons. I find this aspect of God's “Parenting” immensely comforting. It affords me the certainty that God is doing the absolute very best thing -- not only for me, but for everyone involved.

A beautiful story is told about an observer who noticed a leaf fall from a tree. Curious, the observer began asking why the leaf had fallen. When he inquired of the leaf, he was directed to ask the tree, who instructed him to ask an angel. “Why was this leaf cast down from the tree?” the observer asked the angel.

The angel carefully showed the persistent observer that under the fallen leaf lay a sleeping caterpillar. God, in His kindness, had sent down the leaf to shield the caterpillar from the sun while it slept.

God takes everything into account when He makes decisions since He is unlimited by the barriers of space-time, intelligence, and ability.

We are the children who think the extra piece of candy is the greatest thing for us. God is the Parent who knows it's not.

Just as a child may never fully comprehend a parent's decisions, we might never fully understand the inherent wisdom in God's decisions. Sometimes we become privy to seeing the silver lining of the cloud that God has sent us, but we often remain in the dark.

It's a difficult challenge when we cannot see the kindness underlying God's action. It is only by fully internalizing the immutable fact of God's absolute loving kindness and His unerring ability to meet the needs of every creature that we can come to terms with His decisions. He might not give us what we want -- because we don't really know what we want.

Our vision is myopic; God's vision is infinite. We are the children who think the extra piece of candy is the greatest thing for us. He is the Parent who knows it is not.

We can liken the way God runs the universe to a tapestry. One side of the tapestry shows a rich, gorgeous picture, harmonious and well-integrated. But when you turn the tapestry over, what does the underside look like? A messy snarl of knots, twisting and turning with seemingly no rhyme or reason.

The underside of the tapestry is the chaotic picture that we see, with our limited vision. The true side of the picture is what God sees and knows. His is the true reality.

THIS, TOO, IS FOR THE BEST

A friend of mine was describing her particularly hard day to me. As she finished, she said “Well it was a total 'Gamzu'.”

Before you reach for your dictionaries, “Gamzu” is a contraction of the words “Gam zu,” Hebrew for “This, too.” It is a shortened version of the phrase “Gam zu letovah,” --“This, too, is for the best.”

The expression dates back to a story in the Talmud of a sage named Nachum, whose staunch faith in God led him to declare all of God's actions as being for the best. Thus, his name became known as Nachum Ish Gam Zu, Nachum, the Man of 'Everything is for the Best.'

What my friend was saying, in effect, was that her challenging day was really for the best. It wasn't just optimistic lip service -- it put a new spin on things. Instead of facing randomly dished out challenges and unpleasant mix-ups, my friend was acknowledging that God was giving her what she truly needed, what was best for her.

So the next time we feel like throwing a tantrum, we can look, instead, towards our loving Father, and try to accept that His Will is for our best. God's “parenting” is never contaminated with the pride, self-interest, inexperience, or poor decision-making that human parents struggle with. His love and goodness forever guide us, as we navigate the intricate, wondrous tapestry of life.

7 Ways to Become Your Best Self

Gimme Shelter - Ethics of the Fathers 1:4
What Makes Eli Run?
The Tyranny of Materialism
Science Enters the Mysterious Inner World of Consciousness
Comments
MOST POPULAR IN Spirituality
Our privacy policy