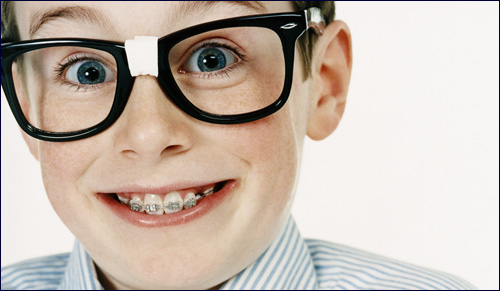 Can someone please come up with a better alternative than letting kids wear glasses? They’re expensive, delicate and made out of glass!

I think someone should try to come up with a better alternative than letting kids wear glasses. They’re delicate, they’re expensive, and they’re made out of glass. What part of this says, “Give it to your kids”? If your kids say, “I love these goblets that we drink from on Shabbos! Can I put one in my knapsack and bring it to school?” Would you say, “Sure! And here’s a little cloth to clean it with, if it gets dirty! Make sure to lose the cloth on the first day.”

“Alright, everyone back in the car. We have to go home and get Daniel’s glasses.”

My kids aren’t grandparents yet, but we got them glasses anyway, because apparently, I enjoy spending 70% of my waking hours asking them where their glasses are.

My next oldest, Heshy, doesn’t wear glasses, and is young enough to be incredibly jealous, but he makes up for it by never having the faintest idea where his shoes are.

You know how sometimes you get used to someone in glasses, and when he takes off his glasses, something seems off? Like his nose seems a little too long? The issue here is that I’m so used to seeing my kids without glasses, that when they’re not wearing them, I don’t immediately notice, until we’re getting out of the car in front of their school.

“Alright, everyone back in the car. We have to go home and get Daniel’s glasses. And Heshy’s shoes.”

It doesn’t help that half the time the kids take their glasses off because they’re bent. It turns out that my son needs glasses that can survive getting hit in the face with a basketball. Because apparently, the way you play basketball is that you lob the ball toward the person’s face. It’s not your fault, of course. The person is yelling “Here! Pass it here!” and you can barely see him because there’s a defender trying to block your line of vision. So you blindly lob it at the source of the yelling, which, as it turns out, is your teammate’s face.

Luckily, the lenses themselves haven’t broken so far, because they’re not actually made of glass anymore. Everything is made out of polycarbonate now – kids’ glasses, adults’ glasses, those glasses they give you to break at your wedding… So I don’t even know why we call them “glasses”. We should call them “polycarbonates”.

“What happened to your polycarbonates?”
“I don’t know.”
“Where did you see them last?”
“On my face! Oh, here they are. They’re bent.”

The nice thing about wire frames is that you can bend them back into shape, but unfortunately, not always the right shape. There’s always something off about it. You put it on a table, and you notice how it rocks back and forth, and you can’t quite put your finger on why, like those chairs that you get in school that you rock back and forth on diagonally all year. Or you put the glasses on and you feel like one eye is looking out over the glasses, and the other eye is looking under them.

So thank G-d our… Optician? Optometrist? Ophthalmologist? I was never sure which is which… is really nice and bends them back into shape, free of charge. So my kids keep going back there, every other day. He knows them by name. But for his sake, time-wise, I hope that bending kids’ glasses back into shape for free isn’t his main source of income.

I think part of the issue here is that the perception is that people who wear glasses are smart. I’m not sure why that is. Why are people with glasses smarter? Maybe because they can see the board. But my point is that kids in glasses look older and more mature, and you take one look at them and think, “Yeah, they're old enough to take care of glasses.” But when their glasses are off, they're younger and less responsible, and that’s usually when they get lost. They never get lost on the person’s face.

And I would know. I had glasses for about five minutes when I was a kid. I got them because my parents thought I was blinking too much. I don’t know how much is too much. But they had me checked out, and the doctor suggested glasses. I don’t remember actually having vision problems – if you’d asked me, I would have said that I was blinking because too much air was getting into my eyes. I don’t remember if the glasses did anything, except that they did stop the blinking. I think they acted as a windshield, because glasses were huge back then. This was before science discovered that the only part of your face you really have to see through is your eyes.

Back then, glasses were not made out of wire -- they were made out of plastic -- and they didn’t bend, they broke. It was not uncommon to see a kid walking around with one ear piece missing or a thick piece of tape around the nose part. In fact, I lost mine for a while there, and they weren’t even bent.

Originally, the purpose of my glasses was to help me see the board. Nowadays, I’m a teacher and I stand right next to the board, but I still wear glasses. That way, I can see the kids in the back of the room, because those are the kids who need the most supervision. The ones at the front of the room pretty much watch themselves. But some of these kids in the back, I’m pretty sure, need board glasses too. They sit in the back, but on a good day, when they want to pay attention, they spend the entire time standing between my desk and the board, no matter how much I trip over them. “You’re not made of glass,” I say.

The kids in front don’t need glasses, they need periscopes.

So I know firsthand that giving kids glasses isn't the best idea. So what do we do? Give them contacts? Judging by where they leave their glasses, we’d be crawling around all the time, looking for lenses.

Laser eye surgery? My kids won’t even open their mouth for the dentist.

It’s not easy being a parent. It’s not easy trying to do what’s best for your kids and outwit them at the same time, all the while secretly hoping that your kids are smart enough to outwit you. If they can be outwitted by you, what hope do they have in the real world? They can’t even see anything.