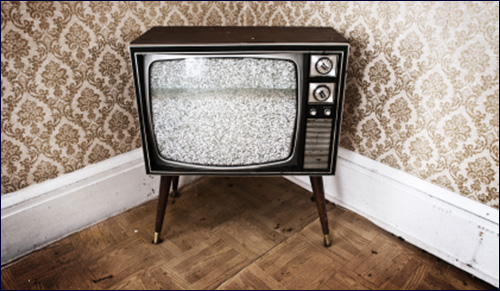 Why our family doesn’t watch television.

I heard that remark – and variations on it – from everyone I told about my new resolution. My husband and I just had our first child, and I decided (informing my husband, who agreed – cautiously – to back me) that we’d build our new family without television being a part of our lives.

I’m not sure exactly what made me so anti-TV once I became a mother. I was raised with a steady diet of television programs, starting with Sesame Street and continuing on to every popular show in the ‘80s and ‘90s. I’d tapered down my TV viewing as an adult – who had the time? – but I was still an avid TV watcher when I decided to experiment with quitting.

Our son was a colicky baby; the only way to calm him down was to swing him gently. Desperate, I looked up mechanical swings on-line. Perhaps it was the product reviews that made me decide to go ahead and say no to TV. “If you’re like most parents, you’ll put this swing in front of the TV” was a typical appraisal. I was horrified: the thought of putting my brand new baby in front of the TV like that – instead of talking and smiling with him – seemed so wrong.

The American Academy of Pediatrics recommends no screen time at all for children under two.

That’s the position of the American Academy of Pediatrics, too, which recommends no screen time at all for children under two. “A child’s brain develops rapidly during these first years, and young children learn best by interacting with people, not screens,” it advises.

My friends weren’t convinced. “Yeah right,” they’d say, pointing out they weren’t abusing television; that half hour of TV made it easier to start dinner or grab a quick nap, and their kids didn’t seem to suffer.

Their babies certainly did seem alert and happy, but I decided to stick to my resolution anyway: no TV for my son. And, increasingly, that meant no TV for my husband and me either.

For a few months our television sat in its usual corner. I did turn it on a few times during our baby’s naps, but for the most part it remained silent and dark. Those early weeks of new parenthood were a magical time; we didn’t even miss it.

Our big test came a few months later, when we moved and opted not to buy a TV plan. Nervous about being without television, I went out and rented a bunch of movies – and wound up returning them the next week, unwatched. We were getting used to finding our own, non-screen-based entertainments, and to my surprise, after a few weeks of “withdrawal” I stopped even thinking about the few shows I used to enjoy so much. We were officially TV-free.

A few years into our no-TV experiment, a relative visited expecting to find our kids pining for the shows their friends watched. She was surprised that the subject of television never came up. Our younger kids knew all about the latest preschool characters from books, and our older children seemed to have naturally gravitated towards friends who didn’t watch much TV.

Even my most TV-tolerant friends tell me they don’t love the medium. “My kids have been inside, watching all morning!” one friend told me when I ran into her one beautiful sunny day. Another friend complained that her kids started copying the sassy tone of voice and sarcastic humor of their favorite “tween” television characters.

Advertising is another headache: the American Academy of Pediatrics estimates that children watch 40,000 ads each year on TV. That’s a lot of TV. A 2011 study found that American children under two watch 53 minutes of TV or videos every day – a third of them even have their own set in their bedroom. Older kids spend an average of three to four hours watching TV each day; by the time American teens are in high school, they’ve spent more time watching television than being in school.

Recent studies have shown that TV habits are associated with lower grades, exercising less, and being overweight. TV viewing is even tied to some common illnesses: for every two hours of TV watching each day, viewers risk raising their chances of developing Type Two diabetes by 20% and increase their likelihood of heart disease by 15%.

Without TV, my kids – and my husband and I – are forced to come up with our own entertainments. We listen to music together, play games, read books. True, most families do this, but I love the fact that for us, there’s no alternative. With no escape to the alternate world of TV programs, we have to rely on each other for entertainment, for conversation, for relaxation.

We do still own a television, and there’ve been times over the years – during the Olympics, during the American Presidential debates – when I’ve turned it on for my kids.

Yet, gathered together, watching these special television programs, instead of feeling a magical connection with the special events we were watching, my kids felt bored. They hated the constant ads that punctuated the Olympics. They found the commentary repetitive. And – to my surprise – so did I. Rather than being magical, TV felt dull, not as challenging or interesting as the books, music, or other activities we’re used to filling our days with.

Last year, I was thrilled to read the comments of Ela Naegele, an Orthodox Jewish woman who is one of 83 Rhodes scholars studying this year at Oxford University. Reflecting on her upbringing, she credited her parents with helping her become successful: specifically, she thanked them for three things – for reading to her and her siblings at night, for encouraging them to study musical instruments, and for never letting them watch TV.

The jury’s still out on our own no-TV experiment. It feels fulfilling for us not to have the easy entertainment of television to rely on. Will we experience any long-lasting benefits? I hope that giving my kids the gift of entertaining themselves, of spending quality time together with their family with no distractions is benefiting them today - and will enrich them in the long term.

When My Husband Lost his Job