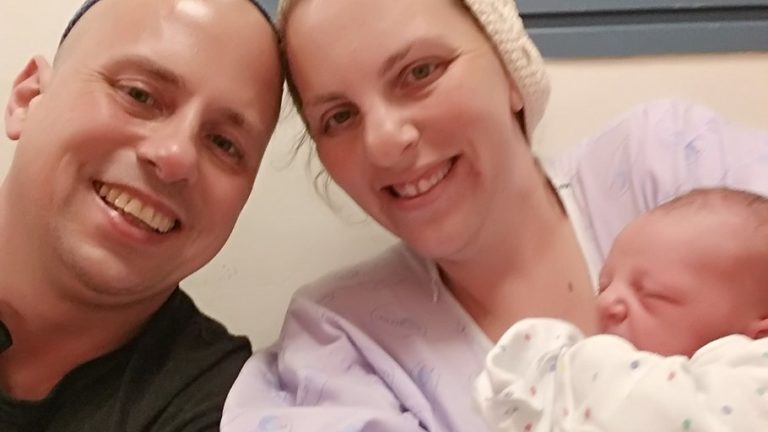 My wife gave birth to our first child in Ashkelon while terrorist rained down rockets. The hospital may have been hit by shrapnel, but we have emerged stronger.

Imagine giving birth to a baby with rockets flying overhead. I didn’t have to imagine it. I lived it.

I was born in Rome and lived in Bologna Italy until a few years ago when my wife Lauren and I decided to make our home in the city of Ashkelon, Israel.

Lauren and I had been married for almost five years without being able to conceive. We started fertility treatment in Italy and after we moved to Israel we were eventually blessed with a successful round of IVF. Being that the little girl on her way was God’s answer to our heartfelt prayers, my wife suggested that we could call her Eliana (meaning, “my God answered”), to which I happily agreed. But Eliana still had to make it to this world and suddenly her journey looked quite dangerous.

A few weeks ago on Shabbat morning, the Torah reading was interrupted by a rocket siren. Hamas terrorists decided to indiscriminately start firing rockets at Israeli citizens. More alarms followed so I walked home to check on my wife who was almost 37 weeks pregnant. On my way another alarm rang out. There were no bomb shelters in sight so I did the only thing I could – I picked up my pace and started praying. I saw three rockets explode in the sky, intercepted by Israel’s iron dome defense system.

When I got home, my wife was physically okay, but rather anxious, as can be expected. A few hours had passed without rocket sirens and I decided to go back to shul for mincha, while my wife went for a walk with some friends by the beach. Just then two rockets struck the water near the beach where Lauren was. Lauren and her friends ducked next to a low concrete wall on the promenade, while a group of Arabs pointed at them and laughed. Their behavior angered her. How could people be so callous?

After Shabbat, the situation escalated with alarms going off five or six at a time. That night we slept in the bomb shelter. At around 5 in the morning my wife informed me that we had to go to the hospital. She was having contractions.

When we reached Barzillai Hospital, sirens had been ringing out constantly in the city for a while. We knew that two houses had been hit in Ashkelon and three people had been killed.

Lauren’s labor was progressing quickly and she was ready for the delivery room as soon as we arrived. The medical staff told us that all four rocket proof delivery rooms were currently occupied. With little choice we agreed to go to a non-sheltered one.

While the doctor was tending to my wife who needed some post-birth care another alarm went off. Against my wishes, I was ordered to leave my wife’s side and take our new baby to the shelter. My wife and I looked at each other, while the young nurse told her twice, "Aní eetah, I'm with you," while stroking her arm.

Think about having to make that decision: flee with your newborn baby to a bomb shelter while your wife remains in harm’s way undergoing medical treatment. I ran, my heart filled with conflicting emotions, while the medical staff continued their heroic work under extreme pressure. 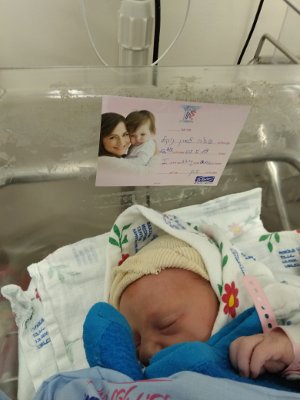 In the shelter while I was on the phone with my rabbi in Italy who called to congratulate me, we heard two very loud explosions. The department of oncology was hit by shrapnel.

After what seemed like an eternity, my wife was taken to the rocket safe area, so we were finally together again. A scared, but happy family.

A nurse asked me to follow her with the baby for a routine check-up. All the babies were moved to the bomb shelter. So that's where little Eliana had to stay, along with more than a dozen of the other newborns. For the first day of her life, my baby girl was living in a bomb shelter.

I'm so proud of my wife who courageously faced the pain of birth in such a distressing situation. And I'm proud of my daughter who was unwittingly born a hero, coming to life while our enemies were trying to kill us.

Not only did God answer our prayers, but He gave a very meaningful answer to the terrorists. You want to kill us and wipe us off the map? Here is our answer. A new Jewish baby – living proof that the Jewish people will live in this land forever.

Israel, Tikkun Olam and the Tsunami