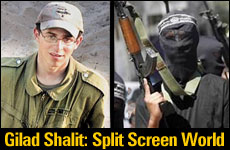 The government and people of Israel instinctively supported the release of Shalit because these Torah values are so deeply ingrained in our national psyche.

News channels used the dramatic technological device of a “split screen” in reporting the release of Gilad Shalit. This may seem like a trivial detail in the context of a momentous event that touched the hearts and minds of Jews the world over, but the split screen actually symbolizes what we all experienced last week: on the one side, the joy and relief as Shalit was being reunited with his family and his people after more than five years in captivity; on the other, our pain and fear as sworn enemies of the Jewish state and the Jewish people were released, unrepentant of their violence.

The split screen also demonstrates the perverted moral equivalence that the world ascribes to the Arab-Israeli conflict. The split screen and the term “prisoner swap” imply reciprocity, when, in fact, there is no equivalency between the release of more than 1,000 convicted terrorists, who were accorded full legal and human rights, and the freedom of one soldier kidnapped and held cruelly in violation of international law – without trial and horrifyingly incommunicado.

But there is another powerful message reflected by the split screen: the dichotomy of values. One of the visionary rabbinic leaders in the United States during the 20th century, Rabbi Mordechai Pinchas Teitz of Elizabeth, New Jersey, used to say, “The Torah speaks in the language of tomorrow.”

God gave us the Torah for all times, all places and all situations. The Midrash says that “God looked into the Torah and created the world.” The Mishna says, “Turn it [the Torah] over and over, for everything is in it.”

Torah, being the blueprint for the world, contains everything. By referring to “the language of tomorrow,” Rabbi Teitz took this one step further, saying that the Torah, given thousands of years ago, contains many ideas that we are only able to understand as history unfolds.

If the choices before us are life and death, who would choose death?

“I have placed before you life and death, the blessing and the curse; and you shall choose life” (Deuteronomy 30:19). For generations, commentators have grappled with the meaning of this verse: Why does God have to give the instruction to choose life? Is it not obvious? If the choices before us are life and death, who would choose death? Over the centuries, many answers have been suggested. In our generation, a new insight to this verse has been revealed.

Certain terrorist groups and leaders have perverted their religion into a celebration of death. As Hezbollah Secretary-General Hassan Nasrallah infamously said in 2004 after a prisoner swap, “We have discovered how to hit the Jews where they are the most vulnerable. The Jews love life, so that is what we shall take away from them. We are going to win, because they love life and we love death.”

It is true that throughout history there have been many people who have had no compunction about killing Jews; but what distinguishes Hamas, Hezbollah and their cohorts is their glorification of death and martyrdom. Their signature crime is the suicide bomber, who glorifies not only the murder of others, but his own death as well. Even mothers celebrate their children becoming martyrs. When the Torah says, “You shall choose life,” its message is in contrast to those who choose death.

The split-screen coverage of Shalit’s release reflects the two sides of the verse: “I place before you life and death.”

On the one side of the screen was the celebration of death, where those guilty of perpetrating the most horrible crimes against innocent men, women and children were welcomed as heroes.

On the other side of the screen was the picture of a gaunt, pale and lonely soldier, for whose freedom an entire nation prayed and rallied and for whose life a nation was willing to risk its own safety. What other people or government in the world would release more than 1,000 convicted, unrepentant terrorists for the freedom of one hostage?

This decision seems counter to the rational, political and military considerations that governments and people normally undertake. Where did such a decision come from?

Let’s consider this from a psychological perspective, and not from the perspective of right and wrong, which must be determined by Halacha as ruled upon by a great posek comprehensively analyzing the Talmud, codes and responsa, with cognizance of the political and military realities. Indeed, many have argued in this regard that the decision was wrong precisely because of the sanctity of life. But let’s look beyond the intellectual merits and try to understand the decision as a psychological-societal phenomenon.

The decision is now a reality, so let's feel proud at the bold and eloquent message that went out to the nations of the world.

What psychological forces led Israel to agree to this deal? Why is it that only a Jewish state could possibly have done this? The answer to these questions lies in the values buried deep in the Jewish psyche from the time we received them at Mount Sinai, where God gave us the Torah 3,323 years ago. Generations of Jews have been born into the inspiring ethos of “And you shall choose life,” and infused with the lofty spirit of the Mishna passage that to save one life is to “save the world,” and enlightened by the halachic principle that pikuah nefesh (danger to life) overrides almost all mitzvot.

The government and the people of Israel supported the release of Gilad Shalit instinctively and emotionally because these Torah values are so deeply ingrained in our national psyche. It is a decision no other country would have made.

Or, in the words of our Shabbat afternoon prayers, “Who is like Your people Israel?”

Let us set aside our anguished deliberations about the wisdom of this decision, which is now a reality, and rather feel proud at the bold and eloquent message that went out to the nations of the world as they watched the Jewish state defy the normal laws of human nature and society to sacrifice and risk so much to save just one life.

Remarkably the Haftara of the week of Shalit’s release spoke in the language of tomorrow, where the prophet Isaiah said in the name of God: “I called you in righteousness, and have taken hold of your hand... I have appointed you... to be a light to the nations; to open blind eyes, to bring prisoners out of a dungeon, those who sit in darkness out of a prison.”