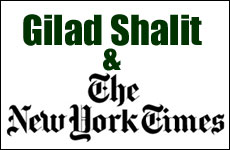 I've been reading the Times pretty much every single day since I was ten-years-old. That's more than a half-century by now.

Along the way, I've been informed, inspired, and occasionally infuriated.

This week, there was cause for infuriation.

First, it came on Monday, in the form of four photographs that appeared on the first page (p. A4) of the International section.

The largest of the four, 6 x 9 inches, was at the top of the page and immediately caught the reader's attention.

It was a poignant picture of a little girl leaning against a largely empty wall and staring upward, as the caption explained, to a small picture of her grandfather.

Walid Aqel, 48, was to be among those Palestinian prisoners released in the exchange for Gilad Shalit, the Israeli soldier kidnapped by Hamas in 2006 and held incommunicado until his release this week.

The paper failed to mention, in the caption or elsewhere, that Aqel was a founder of Hamas' military wing, had much Israeli blood on his hands, and was sentenced by Israel to life imprisonment.

Instead, the overriding impression conveyed was that Aqel was, above all, a grandfather, whose adorable granddaughter was pining for his return from his Israeli captors.

Then, just below the photo was the article itself -- "Israel Names 477 to Go Free in Trade for Hamas-Held Soldier."

And beneath the article were three small photos, each measuring 2 x 3 inches, which conveyed images of the human havoc wreaked in Israel by some of those Palestinians to be released in the deal.

Related Article: This Was No Prisoner Exchange

Because of their diminutive size and busy images, those photos didn't draw the eye easily, although they should have been the heart of the story.

After all, they conveyed the nature of the terrorists to be freed, helping readers understand how gut-wrenching the decision must have been for Israel.

Then came the Times' editorial, "Gilad Shalit's Release," on Wednesday.

It was, frankly, among the most upsetting I've ever read.

The day after Shalit was released and returned to Israel, with 477 Palestinian prisoners sent to Gaza, the West Bank, and elsewhere, and a second group to be freed soon, the paper chose to go after Israeli Prime Minister Benjamin Netanyahu yet again.

He's been a favorite whipping boy for the editorial writers since he assumed office in 2009.

They give him little credit for what he's done to advance prospects for peace and Palestinian development -- the ten-month settlement freeze, the lifting of blockades and checkpoints on the West Bank, oft-expressed support for a two-state outcome, and help for the rising Palestinian economy. And they spare no criticism for his alleged misdeeds.

But this editorial took the cake.

By the second of eight paragraphs, and barely 24 hours after the drama of what had just taken place with Shalit, the editorial was already darkly suggesting this was really a Machiavellian plot to further weaken chances for peace -- and the blame, predictably, was laid at Netanyahu's doorstep.

Of course, the editorial could have gone in other directions.

It might have dwelled on the extraordinary importance Israel attaches to human life, in this case the life of one soldier.

It could have focused on the nature of Israeli democracy, where Gilad Shalit's parents never stopped mobilizing on behalf of their son, and created a national movement to liberate him, irrespective of the cost.

It might have reminded the world of the contrast between Shalit's captivity -- more than five years without a single visit by the International Committee of the Red Cross, much less his family -- and that of the Palestinian prisoners, none of whom surely would have wished to trade their diet, access to the outside world and, indeed, to sunlight, or opportunities for education with what Shalit endured.

And it might have contrasted the moods following the swap.

Israel warmly welcomed home its son's return, while engaging in a sobering debate about the meaning of it all and what might loom ahead.

Meanwhile, in the West Bank and Gaza, there were no expressions of remorse for the Israeli blood spilled by the freed terrorists in pizzerias, lynchings, discotheques, and Passover Seders. To the contrary, there were frenzied calls for the kidnapping of more Gilad Shalits, while Palestinian Authority President Mahmoud Abbas, not wanting to be outdone by Hamas, lauded the arrivals: "You are freedom fighters and holy warriors for the sake of God and the homeland."

But as usual, Abbas got a pass in the editorial. Ultimately, he never seems to be responsible for anything.

Praising terrorists? A fiery speech at the UN last month, where he denied the Jewish people's ancestral connection to the region, while citing the Muslim and Christian link? Avoiding bilateral talks? Setting preconditions for negotiations, while refusing Israel's right to do the same? A reconciliation agreement with Hamas? PA spokesmen who continue to call for Israel's eventual destruction and a judenrein West Bank?

All of that seems to count for little, since, we're told, it's Netanyahu's fault anyway.

Then there was one final reason for infuriation.

With Muammar Al-Gaddafi's demise on Thursday, I was reminded again of just how shocked I was on January 21, 2009, when I opened my daily edition of The Times to see an op-ed, entitled "The One-State Solution," by, of all people, the Libyan leader. Surprise of surprises, he called for an end to Israel and, addressing a topic to which he brought such great expertise, the creation of one big, happy family in Israel's place.

Having some idea of how difficult it is to get published on that page, I couldn't quite grasp why the paper would give this tyrant prime real estate to spout off his irrelevant, absurd views on such an issue.

All I can say is, to better times!

An Open Letter to Jimmy Carter

The al Durah Blood Libel
Do You Like Slow-Cooked Food? Thank the Jews
Ashkenazi Style Cholent Recipe
Were Adam and Eve Jewish?
Comments