Gifts Not to Give on Chanukah 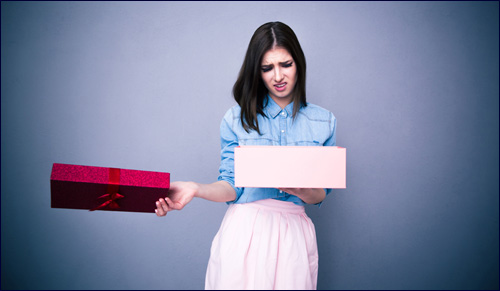 Instead of gift cards, try currency with a stamp on it that says ‘Expired.’ Because that is what is going to happen to that gift card.

There is such a thing as bad thoughts. I know this, because I have received many Chanukah gifts over the years. And every gift was followed with, ‘It is the thought that counts.’ Every time I heard that, I knew that the gift was a mistake.

These are all of the really bad gifts that ended up in my room.

If you want an article about what gifts to get, look on Amazon and check out what you missed on Black Friday. For the record, I did not get a drone camera.

Instead, here is a list of Chanukah gifts you should not get for people. These are really bad gifts that ended up in my room.

A Calendar From a Previous Year

Certain gifts are time sensitive. There is an end of year sale on calendars and I respect that. Around December time, the previous year’s calendars go on sale.

Also, it would have also been nice if my aunt did not mark it up with all of her appointments.

A Racket with a Ball Attached

That kept me frustrated for all 8 days of Chanukah. The Rubik’s Cube also got me on edge for a while. Want to make my holiday a nightmare? Give me a game that takes any amount of skill or knowledge. I have been looking at the Sudoku book for a good four years now. Four years of numbers I can’t figure out. Four years of failure.

I love my nephews and nieces, but I did not put the picture up on the fridge. His drawings are bad. I said it because I care. I am a good uncle. I don’t want to have to show that to my nephew and tell him, ‘Do not become an artist.’ It looks like a dinosaur tree, with no detail; just a green marker circle. My sister already stopped him from eating popsicles when she realized he would never make a good architect.

Children should not get credit for everything they do. I am still trying to figure out if my niece deserved to graduate kindergarten. She couldn’t read the diploma. I don’t even think she could trace it, inside the lines.

If you ask me, my nephew should have worked, saved up, and given me something meaningful.

It might have been an ashtray. Pottery class should not be something they allow in elementary schools. It seems to condone smoking.

Paper-mache should be banned altogether. I cannot tell you how many gifts I have received over the years, that look like balloons.

Socks that My Aunt Stitched together

Anything crocheted is not a good idea. Marshall’s has a hard-enough time getting my waist size right.

Also known as Chanukah gelt (money in Yiddish), this is not real money. They are chocolate with tin foil on top. You got me the first time you gave me these chocolate coins. You aren’t going to make a fool of me again. I will not be mocked by the people at 7-Eleven who do not accept chocolate as currency.

Instead of spending $50 on two dollars’ worth of chocolate, give me $48 and a couple of Hershey’s bars.

David doesn’t cook, unless it is in a microwave. If there was a pasta pusher that pushed pasta into something that cooked it for me, with no thought, that would be a worthwhile gift.

I still haven’t used the gift certificates you got me for my Bar Mitzvah. Next time, give me currency with a stamp on it that says ‘Expired.’ Because that is what is going to happen to the gift card.

Somebody thought this might help me meet a woman. Fitted shirts look good when they fit. That shirt didn’t fit me. Neither did the skinny pants. It seemed the pants were smaller than the size 38s that are 38s.

Stuff to not buy teenagers, because it makes them annoying: Skinny Pants, Uggs, anything tiny with a screen on it.

This was not a gift. This was hand-me-downs. This was something my dad didn’t want. Paisley has been out of style since the 1970s and The Salvation Army didn’t want it either. My parents forgot to pick up a gift for me that year. It was the worst year of my life. I wore it as smock. The whole class thought I splatter painted my shirt. My parents didn’t even wrap it up. It was given to me with a simple command of, ‘Try it on.’

That is usually a wedding gift. I got the point. My parents want me to get married. They could have just said something.

But even people getting married don’t appreciate Challah covers. They don’t need more than four of them. If you are purchasing a wedding gift, check out the registry. I have never seen a registry with Challah covers.

I am raising this for those children who did not get a drone last year. We all deserve a camera that flies and has no concern for the privacy of others. There is no reason you should be getting clothes for Chanukah. The registry should only consist of video games and phone accessories.

The Thought Does Count is the Lesson

I love every one of the gifts I received over the years, because it is from the people I love. But they were all mistakes.

I know, not going to happen. So please excuse me as I need to go clean my room. I need to make space for the new pants and sweaters I am going to receive from my dad this holiday.