Getting Your Dream Job 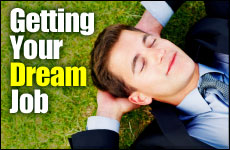 When we dare to believe, we create our own “job possibility."

As an idealistic high school student in Santa Monica, California, I was at a job fair… and panicking. Going from stand to stand hearing about each profession – dentist, surveyor, paralegal – I felt suffocated. Each profession was noble, but I couldn’t see myself doing any of it. Did “growing up” mean abandoning my idealism? I refused to believe that I was meant to leave behind so many dimensions of my personality and passion in order to work 9-to-5 in a profession that spoke to none of them.

I tried to console myself: If I am a unique individual, there must be some unique job that I am supposed to do. If I can get clarity on what I’m passionate about, if I dare to dream of the difference I can make in this world, perhaps my dream job will appear.

Now, 20 years later, there are hundreds of job categories that didn’t exist back then. Many people must have reacted to the high school job fair like me, and their “dream job” has since magically appeared.

I have a theory:

The limits of our belief in what we can do, limits the job we eventually find.

We have two options: Either fit into a box of existing options, or believe we were given an instinct to improve the world for good reason. Then we can endeavor to clarify what exactly it is we are passionate about, and how we can use our talents to achieve that.

He took a job he cared about that barely paid the bills.

I saw this with my brother who refused to take “high paying jobs” because they lacked idealism. Instead, he took a job he cared about that barely paid the bills. Ten years later he runs an organization that partners with the White House on major national initiatives that has changed public perception about important social other issues. Steve Jobs dropped out of college and attended calligraphy classes; decades later it gave him the skill and confidence to pioneer Apple’s sleek design.

When we dare to believe, we create our own “job possibility."

I told my theory to a rabbi.

“God is an equal opportunity employer," he said.

“The world is a mess. We have a partnership with God to help fix it. Anyone who feels the pain of what is going on in the world and wants to do something about it, God will take him for the job.”

“So what does that have to do with being an equal opportunity employer?” I asked.

The rabbi explained: Equal opportunity means employing people who aren’t always the most qualified. God doesn’t especially care if you are the “most qualified person.” He picks the person who is bothered enough and wants to do something to make the world a better place. Once you show you are serious, He’ll make you successful – even if you lack many of the skills needed.

Upon his release, Gilad Shalit told reporters that he always believed he would see his family again. This is an astonishing statement for someone who spent five years in near-isolation, never knowing if that day would be his last. It is this strength of belief that allows the seemingly possible to happen – the exchange of one Jew for 1,000 prisoners.

Similarly, the first step to finding one’s dream job is to simply believe that God has a special plan for you, and that He can make anything happen.

5 Steps to Your Dream Job

God has unlimited funds. He makes you breathe, makes your heart beat, makes the sun rise. He is the ultimate Venture Capitalist.

You can get a job in God’s Fix the World Corporation, but first you need to know what specific “job” you want to create.

Come up with some potential job ideas where you could address this cause and use your strengths in an idealistic way (or get trained in skills you do not yet possess).

Next, you actually need to apply. Every resume must catch the interest of potential employer. If you were putting together an application for your dream job, here’s what you would need to think through:

1) If I had 10 billion dollars to change the world, and could do only one project with that money, what would I do? (e.g. create a cultural movement to teach kids why it is “fun to be good”)

2) Why does this cause speak to me? (e.g. I wish I could have used my power of imagination from an early age in envisioning how good the world could be.)

3) What natural strengths do I have to invest in pursuing this cause? (e.g. creativity, perseverance, salesmanship)

4) Often the first step in showing we are determined to make a difference, is to do what does not come natural to us. What new strengths and skills do I need to make this happen? (e.g. dealing with the small details, patience, organization skills)

5) Go back to your $10 billion cause. Seeing as you don’t currently have the money to pull off your plan, what is one thing you can do right now with your existing resources of time and money. (e.g. use creative ideas to teach my own children one hour a week “why its fun to be good”)

When you have completed your plan, it is time to actually file the application. You do this by stating out loud: “I believe that God has a great plan for me." Are you saying it with zest? So it like you really mean it – even if you have to fake it the first 10 times.

The next and final step is to open the gates of blessing by doing this one action step. This expresses your confidence that God can do anything (even for little old you).

The journey begins with one step.

When the Jews were trapped between the Egyptians and the Red Sea, one man – Nachshon Ben Aminadav – stepped into the sea and it split. To see the sea split in our own lives, we have to take that first step to implement the idea we believe in. By clarifying to ourselves what we are passionate about, and believing that we have something we can do that will make the world better, we open channels of possibility.

However, we only see change happen when we are willing to make that first uncomfortable step. Doing that one action – however inconsequential it may seem in achieving your dream – Is what will help the sea split.

If you begin with this one step, you will begin to see your life coming together in such a way that you’ll emerge as the “right man for the job,” in a cause you are passionate about, and in an area where you can really make a difference.

The Jewish Ethicist: Settling Up

The Jewish Ethicist - Revealing a Secret

Unemployed
The Blue Beyond
Great Place to Live
Is Eating Supposed To Be Spiritual?
Comments
MOST POPULAR IN Current Issues
Our privacy policy